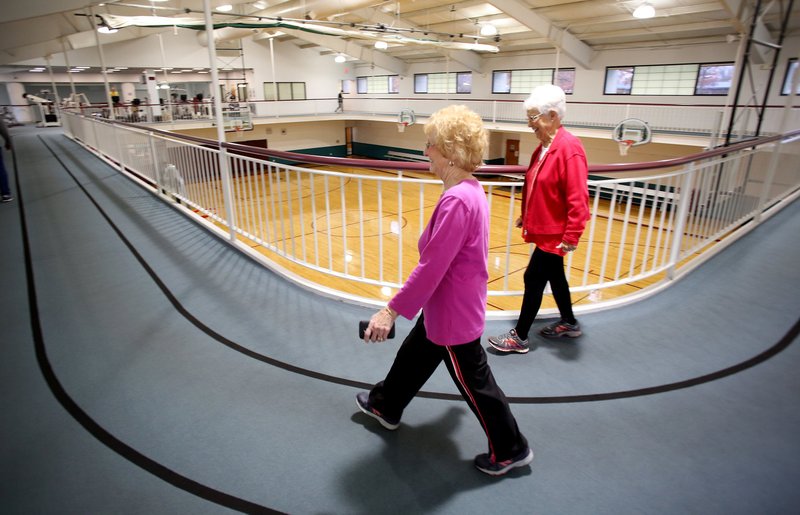 NWA Democrat-Gazette/DAVID GOTTSCHALK Carolyn Snow (left) and Joey Danenhauer walk Tuesday on the indoor track at Springdale's Recreation Center at Murphy Park. The city plans to sell the center to the Springdale School District and purchase the All-Star Sports Arena in Springdale.

SPRINGDALE -- A three-part real estate deal has launched with the downtown revitalization project, students and athletes at the heart of it.

The city will buy the former All Star Sports Arena for use as the city's recreation center and sell its current Recreation Center to the Springdale School District to use as its alternative learning center.

Recreation Center by the numbers

Sports teams: More that 100 teams for youth and adult basketball and volleyball

The chain of sales started with a $2.2 million offer from Recasting LLC to buy the building housing the John and Velma Archer Learning Center at 500 E. Meadow Ave., said Jared Cleveland, deputy superintendent for the School District. The sale also includes a white warehouse building behind the school and a strip of property on which the students have built a garden and a pavilion.

Recasting is registered in Delaware, according to records on the Delaware secretary of state's website. Recasting shares an agent with Ropeswing Hospitality Group and Springdale Downtown, both of which are backed by the Walton family.

Recasting in September purchased properties at 107 Spring St., 128 Spring St., 130 Spring St. and 132 Spring St. from the city for $1 million. The four buildings sit one block south of the City Administration Building and house city offices and employees that have outgrown the administration building. The city will continue to lease thee buildings at no cost for several years until the new Criminal Justice and Administration Center is opened.

Exact plans for the future of the property are unknown, "although it will fit nicely into our master plan for downtown Springdale," said Mayor Doug Sprouse.

The Downtown Plan on the city's website shows the expansion of Luther George Park to Emma Avenue. The park sits just south of the Archer Learning Center.

The School District will make the next move in the real estate deal, buying the city's Recreation Center in Murphy Park for $2.2 million. The School Board will vote on the selling and purchasing the properties at its Tuesday board meeting.

The Recreation Center would become the new home of the alternative learning center starting in August, he said. Recasting would allow the district to remain in the current building at no charge until June 30.

Currently, the school on Meadow Avenue serves about 250 high school students, Cleveland said, and the school always has a waiting list of students.

The district might be able to meet the needs of those waiting students with the additional room at the Recreation Center, Cleveland said. The district also might consider moving students in the freshman alternative learning program, now housed at Lakeside Junior High School, to the new center.

"The youth center has a lot of additional space," Cleveland said. "It has a gym. We don't have such a facility at ALE. It would give the students a chance to breathe and grow. It makes a lot of sense."

Cleveland added the proximity to Springdale High School could give students an opportunity to participate in programs such as athletics, drama or band not offered at the alternative learning center. The high school sits about a half mile north of the Recreation Center.

The purchase of the sports complex will "really set us up to serve the recreational needs of the growing community for years," said Sprouse. "We will be going from about 5,700 square feet to more than 120,000 square feet."

The City Council will consider during its Tuesday meeting buying the property at 1906 Cambridge St. for $4.1 million. Members also will decide on selling the Recreation Center at 600 Ash St. for $2.2 million.

Sprouse said the $2.2 million will go to the cost of the All Star center, with the remainder of the purchase coming from the money set aside for parks in the 2018 bond issue.

Arkansas Warehouse Group owns the former sports complex, having purchased it in June 2017 for $2.3 million from Shelly and William S. Williams, according to records of the Arkansas secretary of state. The Williamses bought the property from Simmons Bank in 2014 for $2.1 million.

Sprouse explained the city's purchase price of $4.1 million reflects improvements made to the property, although he couldn't list specifics.

"They were asking $8 million before that, so they came down," Sprouse said. "We can't help it if people want to make money. But we believe it's well worth that at less than $35 a square foot."

The complex houses The Playground, a sports center for children. Sprouse noted the city needs to make more improvements to the building before occupancy and over time.

Washington County property records show that All Star Sports Arena bought the property in 2004 from First Baptist Church of Springdale, currently Cross Church. The arena includes multiple indoor courts for basketball, soccer and football, and volleyball allowing the city's Parks and Recreation Department to expand its league play in those sports.

"We hope to transform this facility into a larger-scale recreation center that becomes a destination for both individuals and families," said Bill Mock, director of the Parks and Recreation Department. The city could add a state-of-the-art fitness center that would include yoga and other fitness-related activities. "And we could add other opportunities that we know other places don't provide."