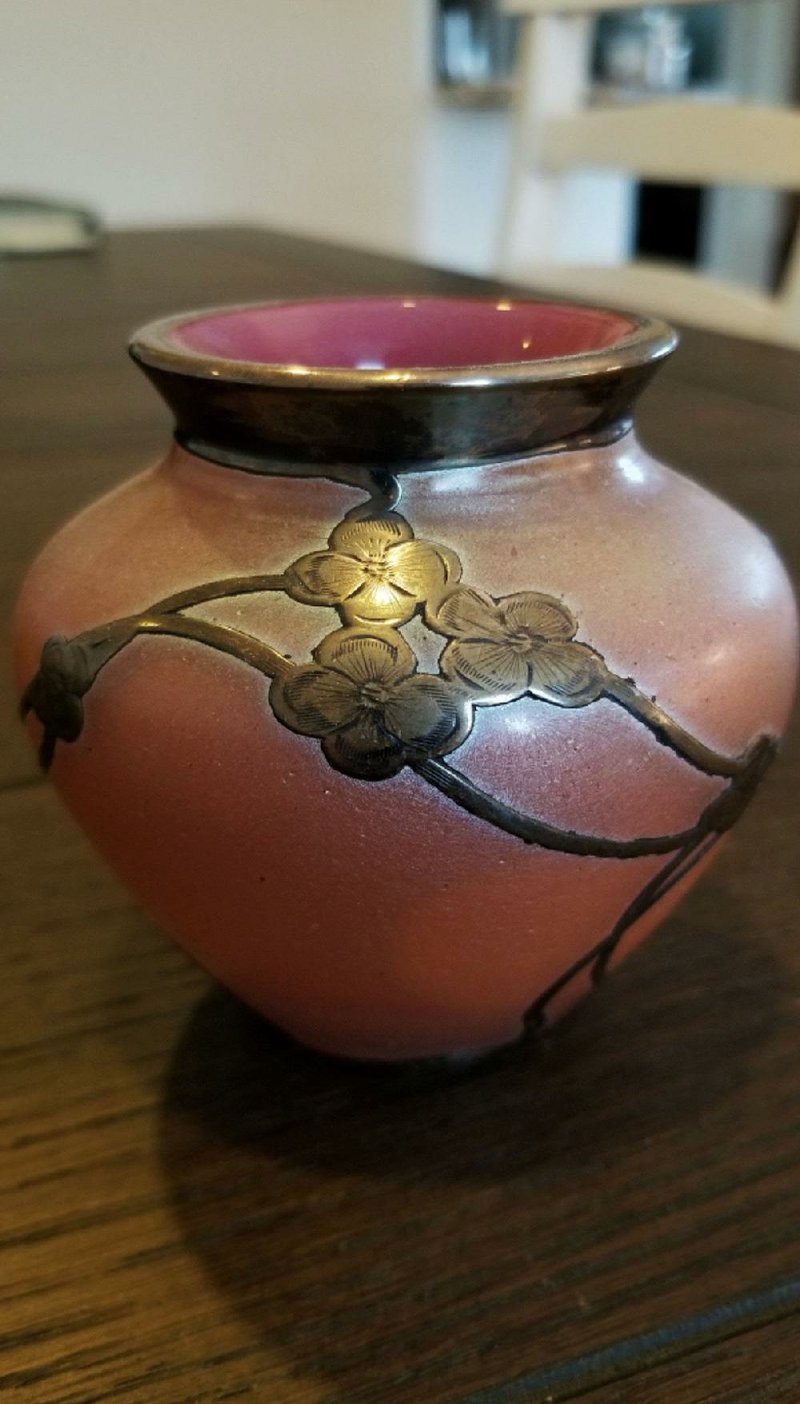 This small rose-colored vase was made by the Bohemian company of Loetz Witwe, and might sell at auction for $450 to $600.

DEAR HELAINE AND JOE: I would greatly appreciate your ideas on two items I have inherited from my grandfather. I think they are lovely and am guessing they have some value. One is a small rose-colored vase with a sterling silver design wrapped around it. It is approximately 3 5/8 inches tall. The other is a decanter set with six 6-ounce glasses and six 1.5-ounce glasses. There is a stoppered decanter plus another decanter without a stopper. Can you give me some idea as to their history and value?

DEAR Q.T.: We have chosen to picture the rose-colored piece because we can suggest a maker. The liquor set is lovely and very typical of glassware made in a European region called "Bohemia," which is now part of the Czech Republic.

This liquor set is decorated with a red overlay that has been cut down to the clear glass below. This "red cut to clear" has hobstars and round "windows" arranged in a very elegant design. This liquor set is a bit unusual because two sizes of glass have survived plus the one decanter with its stopper and the other decanter, which is sadly missing its original stopper.

This set is probably from the first quarter of the 20th century (say, circa 1910), but unfortunately it is not a type of glassware that is highly prized by collectors at the current moment. We feel an insurance replacement value for this set would be in the $250 to $350 range.

As for the small vase with the silver overlay that is pictured, we feel it can be attributed to the Bohemian company of Loetz Witwe. This firm was founded in 1839 by Johann Eisner in the Bohemian town of Klostermuhle (now Klastersky Mlyn, Czech Republic). The glassworks changed hands several times until 1851 when it was acquired by Frank Gerstner and his wife, Susanne.

Susanne was the widow -- or "witwe" -- of glassmaker Johann Loetz, and just before Gerstner died in 1855, the glass works were passed to her -- thus the name of the company "Loetz Witwe" or Johan Loetz Witwe. During the mid- to late-19th century, Loetz made crystal, painted glass and overlay (similar to the glass overlay on Q.T.'s liquor set), but when the Art Nouveau style arrived just before the turn of the 20th century, Loetz glass became much more adventurous and artistic.

Some say the company was inspired by an 1897 exhibition of Tiffany glass displayed in Vienna and elsewhere in Bohemia, but in any event the company began producing iridescent glassware, some with trailings and internal decorations and they produced Art Nouveau naturalistic overlays in sterling silver.

Some of it is quite elaborate, but sometimes on smaller examples the overlay can be rather simple and understated as is it on the piece in today's question. Like the liquor set, this diminutive vase is probably early 20th century and at auction we believe it would probably sell in the $450 to $600 range and retail for closer to $750 to $900.

Helaine Fendelman and Joe Rosson have written books on antiques. Do you have an item you'd like to know more about? Contact them at Joe Rosson, 2504 Seymour Ave., Knoxville, Tenn. 37917, or email them at treasures@knology.net. If you'd like your question to be considered for their column, please include a high-resolution photo of the subject with your inquiry.