Q I read with interest the question about the locust tree a reader sent a picture of in Hot Springs. I was hoping for some advice on how to rid them from my yard. I've tried diesel; I've tried burning them. They seem to have a knack for surviving. Please, please, please help before my grands get into them as they're out "discovering" in the woods.

A The woodier the plant, the tougher it is to kill. You can cut them down and then treat the cut edge with a glyphosate product or one containing triclopyr (brush-killing herbicide). The best time to do this would be in the fall. Woody plants begin storing carbohydrates in the root system to prepare for winter, and they will transfer more herbicide down into the roots, giving you a better chance of killing them. You can use the products in the spring, but the sap is moving up and you will not have as much success.

Q Every fall I have been trimming my hydrangea bushes to prevent their growing too tall for their location. I get plenty of flowers the next summer, but the branches that flower grow so long that the weight of the flower weighs them down and they droop to the ground. Is there anything I can do to prevent this?

A There are four main types of hydrangeas grown in Arkansas gardens. The most common is the pink- or blue-flowering Hydrangea macrophylla or big leaf hydrangea. They set their largest flower buds as they head into fall at the tips of the branches, and so if you prune them now, you cut off the largest blooms for next year. Oakleaf hydrangeas also set their flower buds in the fall. Both of these should only be pruned after they bloom in the summer. The other two, summer-blooming white varieties are the panicle hydrangeas and the smooth hydrangeas. They bloom on new growth and can be pruned as much as you like before new growth begins. All of the hydrangeas are cane-producing plants that have multiple stalks but not strong trunks. To make them more stable, make your thinning cuts close to the soil. That allows stronger single-stemmed canes. Some varieties are more stable than others, so if yours continues to weep, consider staking them.

Q I planted three canna lilies last spring, and they grew remarkably well. But with the first freeze, they fell over and the leaves are brownish black. Have they died? Is there anything I can do to assure blooms next springs?

A Canna plants are not evergreen and will die back to the ground after a hard frost. Cut the old foliage off and add another layer of mulch around them. They are usually winter hardy statewide, but we have lost some in the northern tier of counties during particularly cold winters. An extra layer of mulch should help. Some gardeners do dig them up and store them for the winter, but that can be a lot of work. It is important for all gardeners to clean up spent foliage in the fall, as the leaf-roller insect can overwinter in the debris.

Q This mushroom-looking plant appeared in my yard the first of October [the reader sent a photo]. I've never seen one like it before and it didn't last long. Do you know anything about it?

A It is one of the stinkhorn mushrooms (Phallus impudicus), commonly called stinkhorn because they smell pretty horrific. They can come in several colors but this particular one is more common in the fall and early winter when it cools down and we have rain -- which we had in abundance in October. The brown, slimy part on the top of yours is the smelly part that attracts insects, particularly flies. As they feed on it and fly away, they carry spores with them. These fungi aid in decomposition of mulch, but the odor is usually too offensive to leave them be. When I see them, I knock them down as quickly as possible to prevent their maturing and making more.

Janet B. Carson is a horticulture specialist for the University of Arkansas Cooperative Extension Service. Write to her at 2301 S. University Ave., Little Rock, Ark. 72204 or email her at 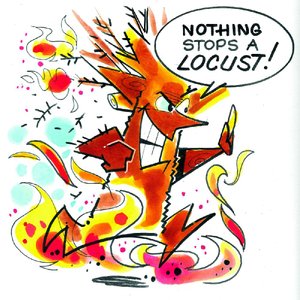 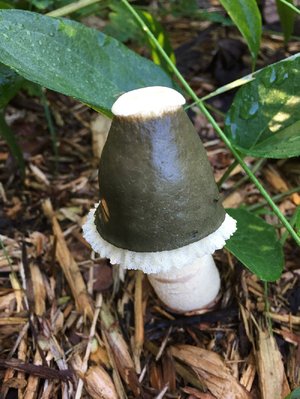 Photo by Special to the Democrat-Gazette
Stinkhorn mushrooms help decompose wood debris. On the other hand, they stink.