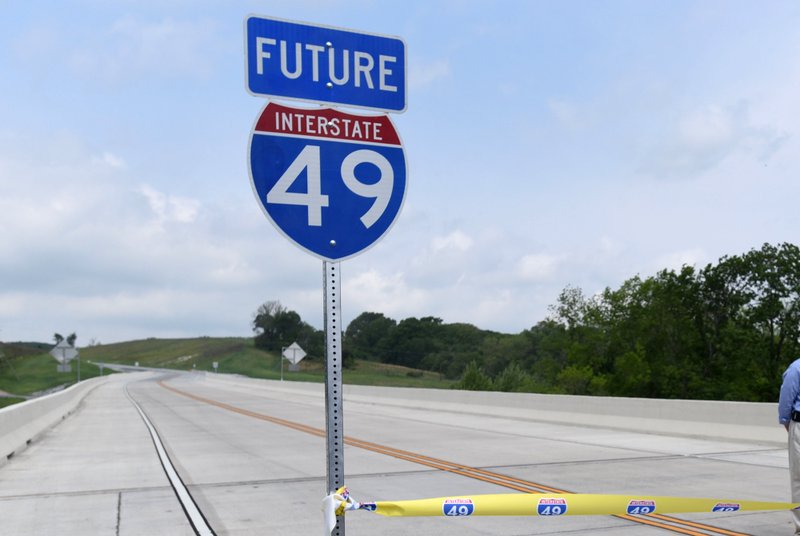 A section of the Bella Vista bypass. - Photo by Flip Putthoff

Arkansas organizations won competitive federal grants totaling $45 million to complete a long-sought section of Interstate 49 at the Arkansas-Missouri border and an extension of a Hot Springs bypass.

The U.S. Department of Transportation has awarded a $25 million grant to complete a 4.8-mile section of Interstate 49 in Missouri immediately north of the Arkansas border. The Northwest Arkansas Regional Planning Commission, whose study area extends into that part of Missouri, applied for the grant.

The federal agency also awarded $20 million to extend the Hot Springs East-West Bypass from U.S. 70 east of Hot Springs to the intersection of Arkansas 5 and Arkansas 7 north of the city to alleviate traffic congestion in downtown Hot Springs, which is part of the National Park system.

The Arkansas Department of Transportation applied for that grant.

In a written statement, Chao said the grants would help "stimulate economic investment, improve quality of life, and create safe, reliable transportation in our communities." 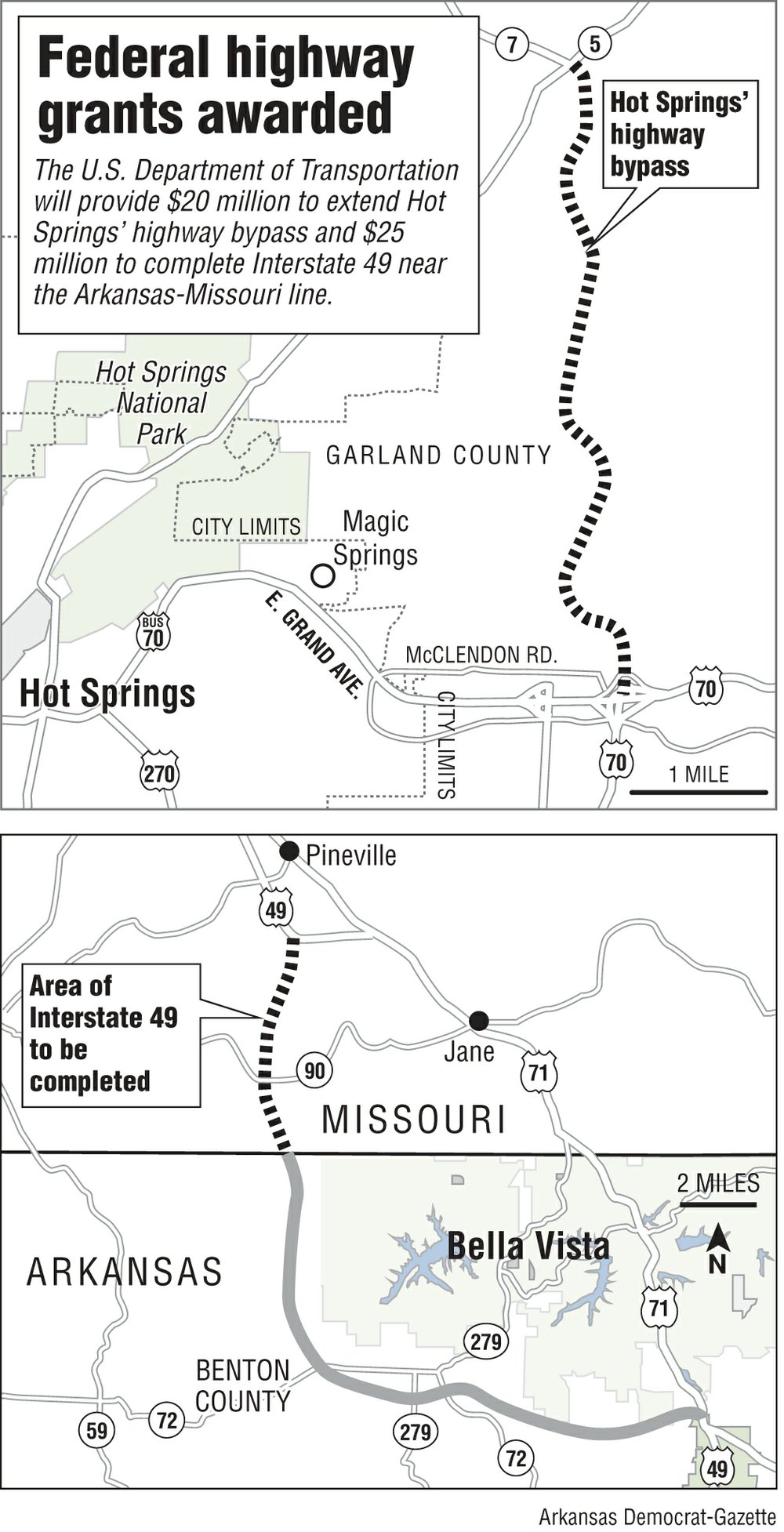 Cotton, among others, had urged the Transportation Department and the White House to support the funding.

"That will be a big boost for jobs and economic growth, not only for Northwest Arkansas but really the whole state and the region because it provides secure, quick and safe transportation between Fort Smith and Kansas City and points further north and south," Cotton said.

The unfinished 4.8-mile section of I-49 in southwest Missouri is part of what used to be known as the Bella Vista bypass and has been on the radar of transportation planners since the 1990s. It has since become known as the I-49 Missouri-Arkansas Connector to more effectively convey the project's location and significance.

"It finishes what's an unfinished 270-mile section of Interstate 49 from I-40 in Fort Smith to I-70 in Kansas City," said Jeff Hawkins, executive director of the Northwest Arkansas Regional Planning Commission. "It's the only missing link for that to be completed."

Motorists on that segment now must get off the interstate on either side of the unfinished segment and negotiate nine traffic signals on U.S. 71, which increases travel times and contributes to congestion and unsafe conditions, according to the commission's application for what is called Better Utilizing Investments to Leverage Development.

"This has been going on literally for decades and what it does is provide interstate from Alma all the way up to the Canadian border," he said. "The choke point in this whole system has been the Bella Vista area and on into Missouri."

Known by its acronym BUILD, the U.S. Department of Transportation's discretionary grant program focuses on projects that achieve national objectives.

Word of the grant also ends years of back and forth over funding between Arkansas and Missouri. Missouri had secured the funding several years ago for its section. But by the time Arkansas had secured its funding, Missouri had shifted some of its money elsewhere.

"It's been a real pingpong sort of arrangement over the last many years and it's good to see this thing now come to fruition," Womack said.

The grant to complete the 4.8-mile segment between the Arkansas border and Pineville, Mo., now allows the Arkansas Department of Transportation to move forward to complete its 14.1-mile section of the connector from the I-49/U.S. 71 interchange to the Missouri border.

"Now that Missouri DOT has the money to fund its portion of the bypass, we can now begin to schedule the remaining components here in Arkansas," said Scott Bennett, the director of the Arkansas Department of Transportation. "And that will happen quickly because we already have the money provided by the voter-approved Connecting Arkansas Program."

Arkansas' portion of the route includes construction of an extension of the connector north from Benton County Road 34 to the Missouri border and an I-49/U.S. 71 interchange in Bentonville. The department has committed $86.6 million to the projects from the $1.8 billion Connecting Arkansas Program, which is financed, in part, by a half-percent increase in the statewide sales tax voters approved in 2012 to fund regionally significant projects.

The I-49 project is regionally significant, Cotton said.

"If you live in Vilonia or Sheridan it's not an issue but when you live in one of the many cities or counties that are on our state borders you are pretty intimately connected with what happens across the state lines as well," he said. "This is the last few miles of road that's going to help connect not just Northwest Arkansas but the Arkansas River Valley and really the entire state and Kansas City with that controlled access highway."

The grant also came after the Northwest Arkansas Regional Planning Commission lost out on a previous federal grant application.

"I strongly encouraged the planning council to reapply," Cotton said. "We helped them walk through the process with the department and I'm pleased to see that their very competitive application won the award. I understand there were more than 800 applications nationwide."

In the grant application for the Hot Springs bypass extension, the Arkansas Department of Transportation portrayed the project as a collaborative effort that needed the grant to complete the $60 million project.

The agency pointed to a 2016 election in which Garland County voters passed a five-eighths percent sales tax. Part of the revenue generated by the tax will be used to pay for $30 million of the project's costs.

"This grant award is an example of success that can be realized when all levels of government work together to accomplish a common goal," Bennett said. "Additionally, the Trump administration is looking more favorably toward projects where larger amounts of non-federal funds are being used. Almost half of the money for this project is from local sources."

The state transportation agency is contributing $5 million of its federal money available for the project. It asked for $25 million in its application for a grant.

"The bypass extension will provide an alternative route to access Hot Springs which should reduce traffic and enhance the historic, revitalized downtown in addition to the jobs and economic activity it will create during and after construction," Boozman said.

U.S. Rep. Bruce Westerman wasn't available for an interview because he was on a plane, a spokesman said. But the Republican from Hot Springs released a written statement welcoming Thursday's news.

"The bypass in Hot Springs plays an outsized role in our region's economy and movement of goods. This grant will further support and expand the bypass, creating opportunity for additional economic development in the Ouachitas. It will also improve response time for emergency services, which will save lives. I thank Secretary Chao and the Trump Administration for awarding this grant important to our region's expanding infrastructure," Westerman said.