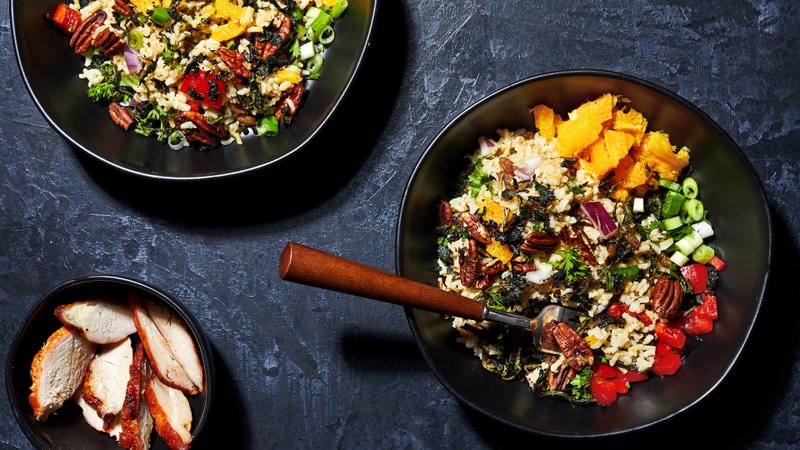 In the whirlwind that is Thanksgiving to New Year's Day, the impulse to order takeout could be fierce, but I ask you to consider making this quick salad instead. It includes a favorite of mine: instant brown rice. No amount of snobbery could make me love this whole-grain convenience product any less. It is a good-for-you fast food.

This recipe can teach you to do something different with frozen spinach, too: Use paper towel to wring all the moisture out of it your hand strength can muster, then spread the spinach on a baking sheet. Treat it to a pinch of smoked paprika and a little olive oil and pop it in the oven. In the time it takes for you to prep the other ingredients, the spinach will roast to darkened, barely recognizable bits that add crunch.

The salad has more crunch in the red onion, crisp red bell pepper and toasted nuts, plus fruit whose squeezed juice goes into a light vinaigrette. Toss in cubes of ham or smoked tofu or leftover chicken or turkey. But it's surprisingly filling, just as it is.

Spread the pecans on one half of a rimmed baking sheet. Wrap the spinach in paper towels and let it sit for 10 minutes, then wring out as much moisture as possible (over the bowl or in the sink; discard that liquid). Spread the dried spinach on the other half of the baking sheet, then drizzle it with 1 teaspoon of oil and season with a pinch of the smoked paprika, tossing to coat.

Meanwhile, bring 1 cup of water to a boil in a saucepan over medium-high heat. Stir in the rice and a pinch of salt. Once the water returns to a boil, reduce the heat to low, cover and cook for 5 minutes. Remove from the heat, give it a stir, then cover and let sit for 5 minutes, or until the water is absorbed. Uncover and fluff with a fork.

Transfer the baking sheet to the oven; toast the nuts for 2 or 3 minutes, until lightly browned and fragrant. Transfer to a bowl to cool; return the spinach to the oven; continue to roast for another 15 minutes, until darkened and lightly crisped. You may need to stir it once or twice.

While the spinach is in the oven, cut the bell pepper into small dice. Cut the red onion into small dice. If using the green onion, trim, then cut it crosswise into thin slices. Peel the orange and cut it in half, then squeeze its juice into a bowl large enough to mix the salad in. Coarsely chop the remaining fruit. Coarsely chop the parsley leaves.

Whisk the remaining oil, a good pinch of salt and a few grinds of black pepper into the juice in the bowl, to form a dressing.

Add the cooked rice, pecans, bell pepper, chopped orange, parsley, red onion, the scallions, if using, most of the crisped spinach and the golden raisins, if using; toss until evenly coated and well incorporated.

Divide among wide shallow bowls, and scatter some of the remaining crisped spinach on each portion. Serve at room temperature.