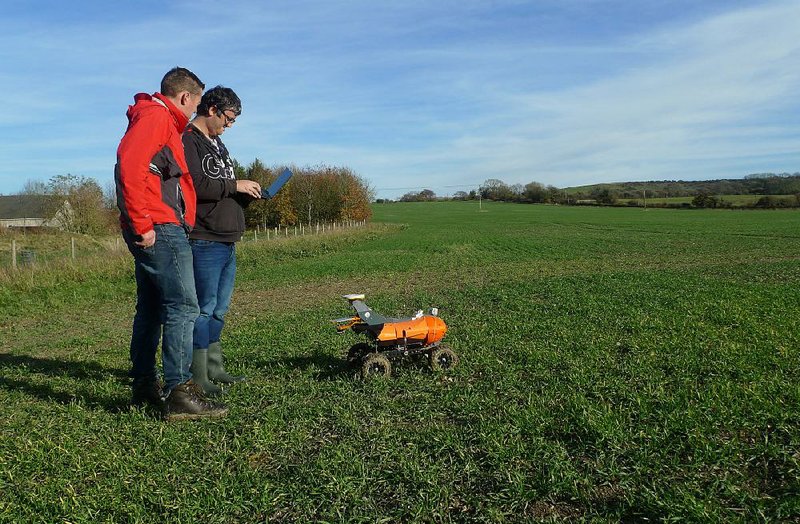 EAST MEON, England -- Faced with seesawing commodity prices and the pressure to be more efficient and environmentally friendly, farmer Jamie Butler is trying out a new worker on his 450-acre farm in England's Hampshire countryside.

Methodically inspecting Butler's winter wheat crop for weeds and pests, the laborer doesn't complain or even break a sweat. That's because it's a four-wheel robot dubbed "Tom" that uses GPS, artificial intelligence and smartphone technology to digitally map the field.

Tom's creator, Small Robot Co., is part of a wave of "agri-tech" startups working to transform production in a sector that is under economic strain because of market pressures to keep food cheap, a rising global population and the uncertainties of climate change. Most robots are still only being tested, but they offer a glimpse of how automation will spread from manufacturing plants into rural areas.

"If we can keep our costs to an absolute minimum by being on the leading edge of technologies as one method of doing that, then that's a really, really good thing," said Butler, one of 20 British farmers enlisted in a yearlong trial.

Next year, the British startup plans to start testing two more robots controlled by an artificial-intelligence system that will work alongside Tom, autonomously doing precision "seeding, feeding and weeding."

The aim is to drastically cut down on fertilizer and pesticide use to lower costs and boost profits for farmers. As such, it not only helps economically, but it also lowers the environmental impact of farming.

"What we're doing is stuff that people can't do," said Ben Scott-Robinson, co-founder of Small Robot Co. "It's not physically possible for a farmer to go around and check each individual plant and then treat that plant individually. That's only possible when you have something as tireless as a robot and as focused and accurate as an AI to be able to achieve that."

Commercial sales of the full, multirobot system are still years away, with larger-scale testing planned for 2021. They represent the next step in the evolution of automation for farms. Self-driving tractors and robotic milking machines have been in use for years and, more recently, unmanned aerial drones that monitor crops have gone into service.

Eventually, farms "will be able to automate virtually everything," said Tim Chambers, a fruit farmer who's not involved in the trial. Some jobs are harder to automate, such as harvesting delicate raspberries or strawberries, but even that is coming, said Chambers, a member of Britain's National Farmers Union.

A more fundamental problem "will be the cost of building those robots and the research that has to go into making them," Chambers said. The low cost of air freight could still make it cheaper to, for example, fly in fruit from other countries where labor is cheaper, he said.

To ease financial pressure on farmers reluctant to make big one-off investments in equipment, Small Robot plans to sell its services as a monthly subscription, charging $765 per 2.5 acres a year.

On Butler's farm, Tom trundles along crop rows taking hundreds of thousands of high-resolution pictures during the growing season. The images are fed to Wilma, an artificial-intelligence platform developed by Small Robot, which is being trained to tell the difference between wheat and weeds.

In 2019, the company will start trials for two more robots, Dick and Harry. Dick will deliver fertilizer directly to soil around roots, instead of wasteful blanket spraying, and use a laser or micro-spray chemicals to kill weeds. Harry will insert seeds into the earth at a uniform depth and spacing, eliminating the need for tractors to plow furrows.

Information for this article was contributed by James Brooks of The Associated Press.