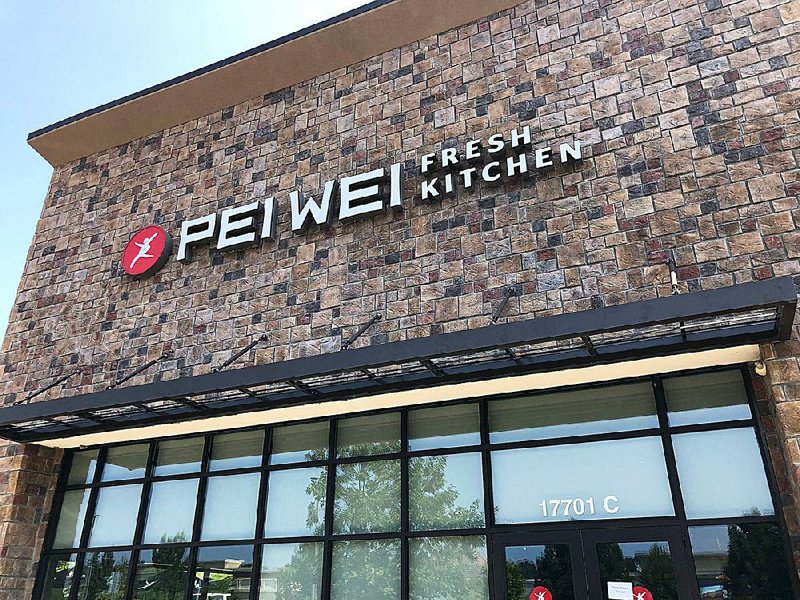 The Pei Wei outlet in the Promenade at Chenal in west Little Rock closed last weekend. - Photo by Brandon Riddle

We've been besieged by readers seeking updates on the planned conversion of Pasta J's West, in the Pinnacle Creek shopping center, 14810 Cantrell Road at Taylor Loop Road, Little Rock, into The Villa West, a revival of Ken Shivey's beloved and long-missed Italian restaurant.

A month of unanswered phone calls and unreturned voicemail messages finally ended last week when co-owner David Whitt informed us that a June 27 sewage leak in the shopping center forced the closure of the restaurant for an indefinite period and put the conversion on hold.

"We've been through hell and back," Whitt says. "For the third time in two years, we got flooded with sewer water for 14 hours. We had to gut the restaurant; everything was contaminated." Damage estimate, he says, is $159,000; "the clean-up alone was $56,000." Whitt said last week he and Thomason are planning to take legal action; as of now, he says, they have no viable options -- they can't reopen in the current space, and they can't afford to start from scratch in another location. "We're stuck; we don't know what to do," he said.

Meanwhile, John Rees of Rees Commercial, which owns and leases out the property, says grease and "feminine hygiene products" in the sewer line at the Pasta J's end of the shopping center are what caused the backup; repairs are in progress; and two other stores on that side of the L-shaped shopping center that were affected by the backup have since reopened. He says the Pasta J's West folks, who still have a couple of years to run on their lease, "could have reopened a couple of weeks ago," but have decided instead to move out. "We wanted them to stay and they just said 'No.'" He's looking at two possible tenants to take over the space and expects to have it leased within the next two weeks.

Whitt and Thomsaon had announced in June that they had reached an agreement with Shivey to revive The Villa, the final location of which, in a shopping center at West Markham Street and Bowman Road, closed in October 2012. Pasta J's West had been scheduled to close in early July, in part so former Villa cooks could train the kitchen staff, and partially for renovation. It had been scheduled to reopen as The Villa West on or about Aug. 1.

The official target is Saturday for the reopening of Kontiki African Restaurant in the Village Shopping Center, 3901 S. University Ave. (Asher and University avenues), Little Rock, in the former space of former Mexican restaurant Playa Azul 2. As of deadline, owner Christian Domingo says he was still awaiting an inspector from the state Health Department; if that happens in time, he'll open on schedule. He's also waiting for approval from the state Alcoholic Beverage Control Division on an application he filed Aug. 3 for a beer-and-wine permit. Tentatively, hours will be 11 a.m.-2:30 p.m. and 4-9 p.m. Tuesday-Thursday, 11 a.m.-9 p.m. Friday-Sunday. The phone number is (501) 615-8504. Domingo estimates that his new location is about five times the size of the one from which he moved, 13420 Arkansas 111, Alexander; the larger kitchen will allow him to expand his menu of authentic dishes from Sierra Leone, where he grew up, possibly including sweet potato leaves, porridge and teriyaki chicken. And he'll have practically unlimited parking in the large shopping center, which also houses Mr. Chen's Authentic Chinese Cooking and the former Casa Bonita/Casa Viva).

Saturday was the last day of operation for the Pei Wei outlet in the Promenade at Chenal, 17701 Chenal Parkway, Little Rock, "AK" -- yes, an email to Pei Wei Rewards customers from the chain's Irving, Texas, headquarters placed the restaurant in Alaska. It offered rewards members a "free Small Plate" at the location in the Midtowne Shopping Center, 205 N. University Ave., Little Rock, "AK," if they dine there before Oct. 5. Midtown location hours are 11 a.m.-9 p.m. Sunday-Thursday, 11 a.m.-10 p.m. Friday-Saturday. The phone number is (501) 280-9423.

We have this update from co-owner Tim Chappell on the The Shack, which is, delays notwithstanding, still going into what has been Gusano's Chicago-Style Pizzeria, 313 President Clinton Ave., Little Rock. The operation did in fact pass inspection by the fire marshal, which Chappell had said was the last barrier to opening; plans are now to first roll out his catering operation with third-party deliveries, which he expects to start by the end of next week. Then he'll work on getting the place open to the public, in a "matter of weeks," he says, with a big party that will no doubt -- as he's planning on turning the River Market space into a blues venue -- include blues acts. He's currently hiring; call the Gusano's phone number, (501) 374-1441. Once The Shack is up and running, he'll start hiring for Hickory Joe's, a smaller, mostly grab-and-go operation using the same smoked meats but in different preparations, in the long-long-long-idle storefront at 402 E. Third St. that was originally announced as the site for the resurrected Shack.

Ace correspondent Brandon Riddle, in an item that hit our website Tuesday, reports that Daniel Bryant, who just bought District Fare, 2807 Kavanaugh Blvd., Little Rock, says the purchase of the deli-sandwich shop-specialty grocery is "an early piece of the puzzle" for his new restaurant project across the street, in the former Helmich's Auto Service, 2712 Kavanaugh. Bryant had announced plans to convert it and the property behind it into a casual restaurant, serving primarily burgers with a soda fountain and full bar. Tentative target to open the yet-to-be-named restaurant is the first half of 2019. Bryant is also the owner of the Hillcrest Fountain, on the same block of Kavanaugh Boulevard as District Fare, as well as Big Whiskey's on the edge of the River Market District downtown and Sauce(d) in west Little Rock.

Fresh Bowl N Roll Bar opened Friday in the Ottenheimer Market Hall, 400 President Clinton Ave., Little Rock, in the kiosk that previously housed Rivershore Eatery. The fare: "bowl" (poke, in very much the same mold as Poke Hula and Ohia Poke) or "roll" (sushi), plus salads with a variety of toppings and dressings. Owner is Mordecai Lee, previously of Japanese-sushi restaurant Eastern Flames at 7710 Cantrell Road, and before that Hanaroo, formerly in the 200 block of West Capitol Avenue in downtown Little Rock, which recently moved -- under subsequent ownership -- to 215 Center St. We don't yet have hours or a phone number.

And speaking of Stone's Throw Brewing, Birmingham Sushi Classes will offer a two-hour, hands-on session, 6:30-8:30 p.m. Sept. 10 at Stone's Throw, 402 E. Ninth St., Little Rock. "We'll teach you to make perfect sushi rice, how to make all of your favorite sushi sauces (from eel sauce to BangBang & more), where to shop/what to buy and how to safely serve raw fish at home with confidence, according to health department standards," according to a Facebook event post. "You'll get two rolls to eat (we make one, you make the other) and a take-home cheat sheet filled with tips, tricks and recipes!" Cost is $40; register online at birminghamsushiclasses.com/littlerock2.html. Call (208) 214-5152 or email info@birminghamsushiclasses.com.

Southern Table, 323 S. Cross St., Little Rock, has started serving a "Bruschetta, Boards, Bloody Brews, and More" brunch, 10 a.m.-1 p.m. Saturdays, at least through the end of the year, says owner-chef Margie Raimondo. She says the success of the brunch so far has led her to add menu items each week, most recently cinnamon rolls and, this weekend, a savory beignet with a crawfish aioli. Vegan and gluten-free options are available. The phone number: (501) 379-9111.

On Monday, which is Labor Day, and all subsequent Mondays, all BJ's Restaurant & Brewhouse locations, including the ones at 2624 S. Shackleford Road, Little Rock, and 3941 McCain Blvd., North Little Rock, are taking half-off the price of any large deep-dish or tavern-cut pizza.

We reported awhile ago that the Redding, Calif.-based Black Bear Diner chain, with outlets in several Western states, was "coming soon" to North Little Rock's Lakewood Village Shopping Center -- target opening date, mid-November. A sharp-eyed colleague recently confirmed our speculation on just where when she spotted a small sign announcing its approach on the back side of the former Dixie Cafe. The restaurants serve an all-day breakfast menu of impressive proportions, plus a lunch that focuses on burgers and sandwiches and a more-or-less home-style dinner menu; check it out online at blackbeardiner.com. 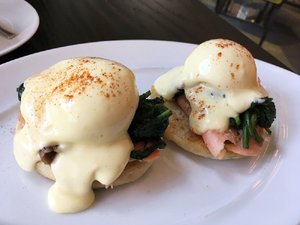 Photo by Eric E. Harrison
A smoked salmon Benedict is one of the new items on the brunch menu at Cache.