The remains of a carriage can be seen on the property of the Dogpatch USA theme park in Newton County in this 2016 file photo.

A Kansas family drove to Dogpatch on Friday to conjure up fond memories from the 1980s.

They got lost on the way to Heritage USA Ozarks Resort, the hotel next to the old theme park, where they had reservations for two nights.

"I kept calling to say 'Hey we're lost and running late,' but nobody answered," said Misty Smith of Columbus, Kan. "We finally got there, and it was just dark. We were confused as to why no one was around."

Smith said she flagged down a passing vehicle, and the driver told her that Heritage USA -- the hotel and theme park's most recent operator -- had been evicted earlier that week. The water and electricity to the hotel had been cut off because the bills hadn't been paid.

"We were very upset since we'd traveled all this way in anticipation of seeing Dogpatch," Smith said.

They had paid a $150 deposit on hotel rooms and $75 for dinner at the Dogpatch waterfall.

It was a bad beginning to the family's first mother-daughter vacation, which they hope to make an annual event.

Besides Smith, 41, other vacationers in her vehicle were her mother Shirley Evans, 65, sister Kerri Matson, 44, and father Larry Evans, 67, who decided to "tag along" when he heard the women were going to Dogpatch.

Smith said they were all wearing identical T-shirts that read "Have a heckuva day at Dogpatch USA" on the front. On the back, the T-shirts had photos of the family members at Dogpatch in the 1980s.

They had season passes to Dogpatch from 1983-86, Smith said.

"It was our favorite place to vacation when we were younger," she said.

Dogpatch USA was a theme park from 1968-93 based on Al Capp's Li'l Abner comic strip, which was published in more than 700 newspapers across the country.

With Dogpatch dark Friday, the family drove 10 miles north to Harrison and spent the night at the Holiday Inn. On Saturday morning, they headed back to Dogpatch.

Some of Smith's passengers suggested they just go home.

"I said, 'No, we came here to see it, by golly. Let's keep calling people until we can figure something out,'" Smith said.

"We desperately wanted to tour Dogpatch but did not want to get in trouble for trespassing," she added.

They saw a sign advertising The Red Cabin rental and called the number. Kathy Hefley answered the phone. She and her husband, Raymond Hefley, own Buffalo River Rentals.

"They were trying to figure out how to salvage their weekend," Kathy Hefley said.

She gave them the telephone number of Charles "Bud" Pelsor, co-owner of the old Dogpatch property.

Pelsor postponed a trip to Eureka Springs to give the family a tour of Dogpatch. He offered to get them a sack lunch from McDonald's or the White Oak Station so they could dine by the waterfall, but they declined.

Then he left them to explore the remains of the 400-acre theme park as they saw fit.

"I said, 'You can stay here until you do battle with the insects that come out at night,'" Pelsor said. "I did the best I could for them. I would have accommodated those people any way I could to make them happy and not go away feeling bad. I'm going to open this place back up or I'm gonna sell it. I want people to have a good memory of Dogpatch, if I can help it."

Smith said the vacation turned out better than it probably would have had things gone according to plan.

"He overcompensated," she said of Pelsor. "We spent six hours there."

They re-enacted 1980s photos and got new pictures at favorite sites like Kissing Rocks and Earthquake McGoon's Brain Rattler, a roller-coaster ride.

"I got a spanking in the gift shop when I was little, so my sister wanted me to re-enact that but I didn't," Smith said. "We laughed so hard we cried several times. They turned what could have been a horrible weekend into one of the best weekends we've had."

"It really took so little to turn those people around and put a smile on their faces and make them happy," Pelsor said. "And it made me happy that they were happy."

Pelsor and his business partner bought the decaying theme park in 2014 with plans to turn it into an "ecotourism village," but they decided to sell the property instead.

Heritage USA Ozarks Resort leased the hotel and theme park earlier this year with an option to buy, but Pelsor said Heritage USA fell behind on the lease payments.

One woman had left the following message on Heritage USA's Facebook page: "Have two nights paid for the 'Christmas Village' in December. Guess that's money lost." 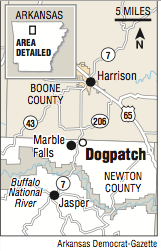 A map showing the location of Dogpatch.