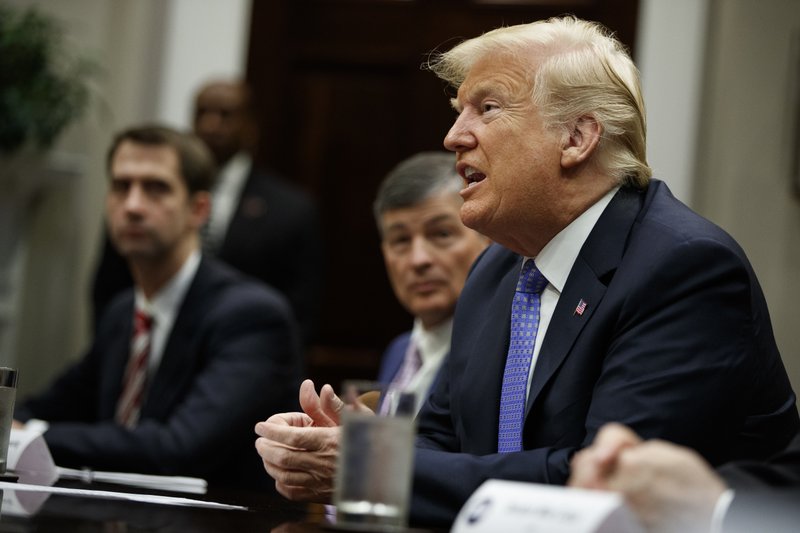 Under the Foreign Investment Risk Review Modernization Act of 2018, real estate purchases involving foreigners could also be vetoed, for national security purposes, if the land is near U.S. military installations or other sensitive government property.

Trump met with U.S. Sen. Tom Cotton of Arkansas and a handful of other lawmakers at the White House on Thursday, thanking them for their efforts to pass the legislation. The president signed the bill into law on Aug. 13.

Under previous law, the president could already block a business merger or acquisition if it "threatens to impair the national security of the United States."

Now the president can prevent other investments, on national security grounds, if they enable foreigners to participate in "substantive decisionmaking" regarding "critical technologies" or "critical infrastructure."

Investments that give foreigners access to "sensitive personal data of United States citizens" could also be blocked.

"This new authority will enhance our ability to protect cutting-edge American technology and intellectual property vital to our national security," Trump said.

The sensitive business transactions are reviewed by the Committee on Foreign Investment in the United States, which includes the secretaries of state, defense, homeland security and commerce, as well as other Cabinet members and additional top administration officials.

Its recommendations are forwarded to the president, who makes the final determination.

Cotton and a handful of others had been "instrumental" in securing passage of the updated measure, which was included in this year's defense authorization act, Trump added.

Foreign investors play a large role in the U.S. economy.

New direct foreign investment in American manufacturing reached $129.4 billion in 2016. "Foreign-owned affiliates" in this country exported goods worth $352.8 billion that same year, according to congressional findings that were included with the legislation.

The Senate version, supported by Cotton, would have reimposed sweeping restrictions on ZTE, a smartphone-maker that sold equipment in Iran and North Korea in defiance of U.S. sanctions.

During the meeting with the president, which was televised, Cotton stressed the importance of safeguarding key American security interests.

"It's a really good thing that the Congress now recognizes China as our chief, long-term rival," the Republican from Dardanelle said.

In the past, China used espionage to obtain sensitive information from the U.S., Cotton said. These days the Chinese simply go on spending sprees.

"Now, they're just outright buying our technology. You know, they don't have to steal it so much anymore, especially if you've got smaller companies that have critical breakthroughs in technology or artificial intelligence, or quantum computing," he told the president. "This legislation will allow us to recognize those threats for what they are and to stop China from buying our most critical technology that we need to maintain our role as the world's greatest superpower."

In an interview, Cotton said the goal is to implement the legislation in a way that "minimizes the threat that China will steal or acquire our critical defense and intelligence technology while also allowing opportunities for genuine investments in the United States that are not a security threat."

"In the middle of the 20th century, most efforts to buy into critical industries were obvious. ... We don't have many companies that manufacture bombers and aircraft and submarines and tanks. Today, companies that are critical to our military and our intelligence agencies can be very small and privately owned," he said.

Until now, there were few tools available to uncover and block those types of sales, Cotton said.

Today's world and today's military are high-tech, he noted.

"It serves us no purpose to have ... the world's best global positioning technology married up to the world's most lethal missiles and bombs [if] that technology can be disrupted with a few keystrokes in Beijing. That's why it's so important to update the law so we are focusing on what are the critical elements of national military power today, things that didn't even exist 30 years ago much less 100 years ago," he added.

The Committee on Foreign Investment in the United States has traditionally focused on specific national security threats arising from a foreign acquisition, according to Theodore H. Moran, a professor of international business at Georgetown University's School of Foreign Service and senior fellow at the Peterson Institute for International Economics.

In a December paper for the American Enterprise Institute, Moran wrote that the Trump administration "may be taking a much broader and more protectionist approach toward foreign acquisitions, in particular Chinese acquisitions, than previous administrations."

Such actions could lead to economic retaliation, he warned in his paper for the conservative Washington think tank.

In an email Saturday, Moran said the final language that was signed into law was less sweeping than some U.S. firms had feared and will be good for the country.

"Alongside [Committee on Foreign Investment in the United States] reform, new regulations will provide much-needed updates to U.S. export control procedures," he wrote.