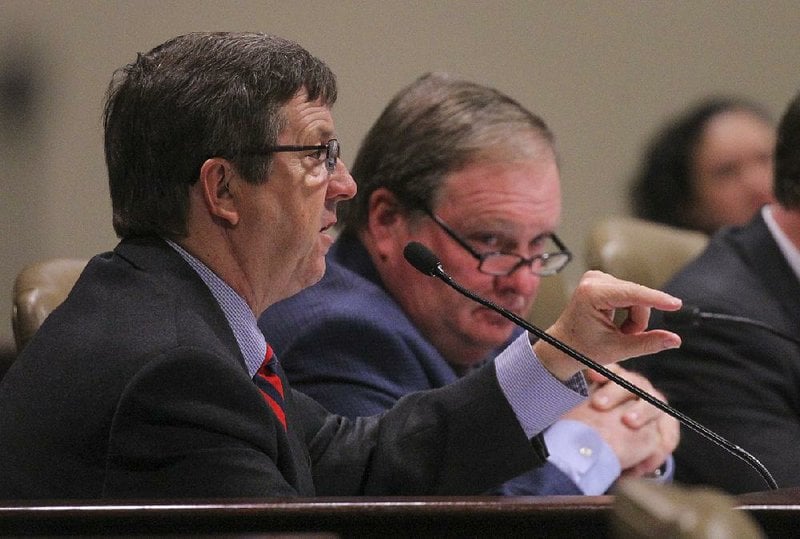 A state legislative task force will soon shift its attention from developing recommendations for possible changes in the tax code to devising plans for phasing in their implementation, after a legislative staff member estimated that various proposals would reduce state revenue by $275 million to $350 million a year.

During Thursday morning's meeting of the Tax Reform and Relief Legislative Task Force, a co-chairman, Sen. Jim Hendren, R-Sulphur Springs, said, "We have a whole lot of proposals here that are going to have a dramatic change in revenue, so we got to be smart about how we implement those.

"We are going to start asking the task force to put together a methodology for implementation [with] triggers, a phase-in and priorities of what comes first and what comes last," Hendren said. The process will begin at the task force's next meeting on Sept. 26-27.

"It is going to be hard for us to determine exactly what the amount we are going to be able to afford in the fiscal year is until we go through budget hearings and determine what the budget is going to be, so we need to be prepared for several different cases," said Hendren, whose uncle is Hutchinson. Budget hearings are scheduled for Oct. 16-Nov. 15; the next regular legislative session begins in January.

"We could end up with anywhere to zero to $200 million [for tax cuts]," he said. "We could do it all in the first year if you had an incredibly strong economy and revenue growth, or we may have to phase it in over several years."

Richard Wilson, assistant director of research for the Bureau of Legislative Research, said a proposal called Option A, plus the rest of the task force's proposals, would reduce total revenue by about $350 million a year in the next several years. Option A would reduce the state's three individual income tax brackets into one and cut the top individual income tax rate from 6.9 percent to 6.5 percent.

The state Department of Finance and Administration estimates that Option A alone would reduce revenue by about $264.8 million a year.

The finance department says that income tax cut proposal would reduce revenue by $191.7 million a year. The proposal also would increase the standard deduction from $2,200 to $6,800 for single taxpayers and $4,400 to $13,600 for married taxpayers, and increase tax rates for some taxpayers that would be offset by the increase in the standard deduction, according to Paul Gehring, the state's acting revenue commissioner.

"I just don't want us to get so far in some other project that we can't come back to that idea," said Teague, who is a co-chairman of the Legislative Budget Committee.

But the Hutchinson-backed proposal was criticized by the governor's Democratic challenger. Henderson, of Little Rock, faces Hutchinson, of Rogers, in the Nov. 6 general election, along with Libertarian candidate Mark West of Batesville. Hutchinson has been governor since 2015.

Henderson said he is astounded by the Hutchinson administration's lack of priority for working Arkansans because the governor's nearly $192 million annual tax cut plan would largely benefit the highest-earning Arkansans.

"After 32 years in politics, Asa Hutchinson could not be more disconnected from what it means to get working Arkansans ahead. In his new proposal, 75% of the tax cut will go towards the state's top earners making more than $80,000 a year. If he thinks this is a serious improvement from his initial proposal to benefit only the wealthiest Arkansans, he still isn't getting the picture," Henderson said in a written statement issued Thursday afternoon.

"Throughout my time working in business and Arkansas public schools, I've learned that it takes investing in public education, public infrastructure, and public safety if we want Arkansas to make serious gains in the next 10 years," Henderson said.

"Working Arkansans will only get an average of less than $100 a year from this plan, but meanwhile cuts could be made to vital state services to pay for this and that money could be more widely invested in providing more equitable education, job opportunities, and safer roads," Henderson said.

In response, Hutchinson's campaign spokesman Jamie Barker said, "Mr. Henderson must have been absent over the last 4 years when we passed tax cuts for low and middle-income Arkansans."

"In the governor's first term we have cut over [$150] million dollars in income taxes that benefits over 90% of Arkansans," Barker said in a written statement. "We did this while increasing teacher pay and investing more in foster care, education, highways and public safety. We have also exempted military retirement from income taxes in our state. The governor's plan for the future will continue to be balanced with additional increases in teacher pay, but Mr. Henderson refuses to even consider the bipartisan legislative tax task force's recommendations.

"While we appreciate Mr. Henderson making clear that he supports higher tax rates, the governor maintains his focus on growing our economy, creating more and better paying jobs, and improving our education system to prepare our students for the future," Barker said.

The task force's other proposals that could reduce or raise revenue by large amounts in the next several years include:

• Creating a nonrefundable income tax credit equal to the amount of property taxes paid on business inventory with a 10-year carry-forward period. The finance department projects that creating this credit may reduce state tax revenue by $70.2 million a year.

• Phasing in a reduction of the top corporate income tax rate from 6.5 percent to 5.9 percent. The finance department projects this would reduce revenue by about $38.7 million a year.

• Repealing the "throwback rule" that's part of the calculation used by Arkansas for the apportionment of income by multistate businesses for income tax purposes. The finance department projects that the repeal would reduce revenue by $24.5 million a year.

• Requiring out-of-state online sellers that don't have physical presences in Arkansas and have more than $100,000 in sales or at least 200 separate transactions a year in Arkansas to collect and remit sales and use taxes. The finance department estimates that this would raise about $35.3 million a year.

The task force also recommended incrementally increasing the carry-forward period on net operating losses to 20 years. Under current law, these losses may be carried forward up to five years for all businesses, except for steel manufacturers, which get 10 years. The proposal wouldn't reduce revenue until fiscal 2026, when the finance department projected that it would reduce revenue by $16.8 million. The estimate gradually increases to $159 million by fiscal 2044.

Nicole Kaeding, director of federal projects for the Washington, D.C.-based Tax Foundation, told the task force, "I think you all are heading in a very good direction with these recommendations."

She said the task force could delay implementation of the nonrefundable income tax credit for property taxes on business inventory and try to expand the state's sales tax base later to fund it.

Kaeding said she supports the task force's recommendation to eliminate the exemption of capital gains exceeding $10 million. She said no other state provides that type of capital gains tax exemption. "I don't see a need to do that," she said. The change would raise about $4.6 million a year that would be used toward cutting income tax rates.

Kaeding said the state should develop "triggers" to phase in tax cuts, but build in some natural growth, including population growth and inflation, totaling about 3 percent a year before the triggers kick in. 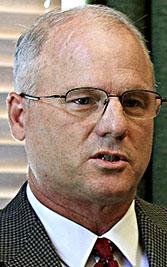