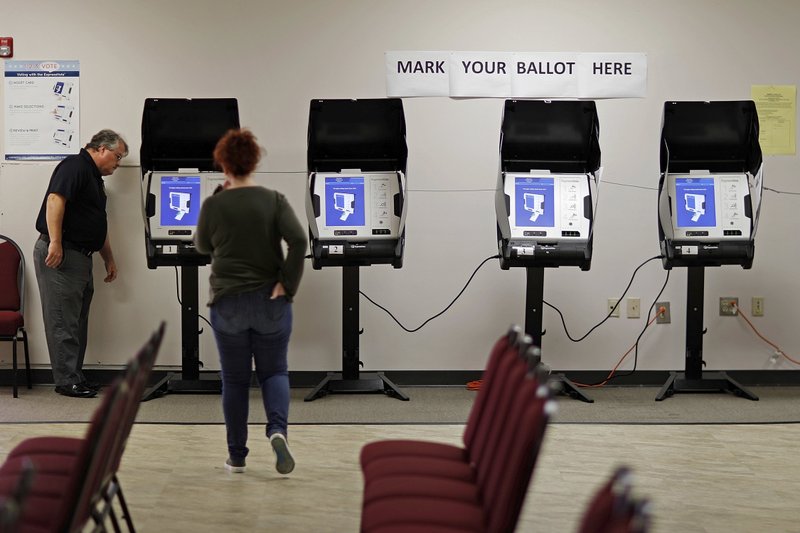 In this Thursday, Oct. 19, 2017, file photo, Kelly Monroe, investigator with the Georgia Secretary of State office, left, takes a look at a new voting machine that produces a paper record being tested at a polling site in Conyers, Ga.

ATLANTA -- Racing to shore up their election systems before November, states are using millions of dollars from the federal government to tighten cybersecurity, safeguard their voter registration rolls and improve communication between county and state election officers.

The U.S. Election Assistance Commission released a report Tuesday showing how states plan to spend $380 million allocated by Congress last spring to strengthen voting systems amid ongoing threats from Russia and others.

All but a fraction of the money has already been sent to the states, the District of Columbia and U.S. territories. The largest chunk -- roughly 36 percent -- is being spent to improve cybersecurity in 41 states and territories.

More than a quarter of the money will be used to replace voting equipment in 33 states and territories, although the bulk of this is unlikely to happen until after the Nov. 6 midterm elections.

States have been scrambling to increase their cyber defenses, upgrade voting systems and provide training to local election officials since it was revealed that Russian hackers targeted election systems in at least 21 states in 2016, although the number is likely greater. There has been no indication any vote tallies were changed.

A Senate report earlier this year urged states to replace outdated voting equipment and ensure all ballots are cast on machines that produce a paper record allowing voters to verify their selections.

Five states exclusively use touchscreen voting machines that provide no such record, along with more than 300 counties in eight other states, according to Verified Voting, a nonprofit group focused on ensuring the accuracy of elections. One of those states, Georgia, indicated that it would use half of its $10.3 million federal grant toward new voting machines, although that amount is just a fraction of what's needed.

The total cost to ensure a paper trail for all Georgia voters could be as high as $120 million, depending on what type of machine the state buys for its 159 counties. The machines will not be in place for the November elections.

New Jersey uses machines similar to those in Georgia, and officials there opted to set aside $2.5 million of its $9.7 million in federal funds to set up a pilot program so local officials can buy or lease voting systems that produce a paper trail. The state has said the program would first operate in small jurisdictions with a small number of voting machines.

Experts remain concerned about the security of those systems, saying hackers could change names, addresses or polling place information and cause confusion, long lines and delays in reporting election results. In turn, such chaos could undermine confidence in the results.

In accepting the federal money, states were required to provide a match of 5 percent and have five years to spend it. Some state officials have urged Congress to create a dedicated funding stream for election security, rather than utilizing a one-time grant program.