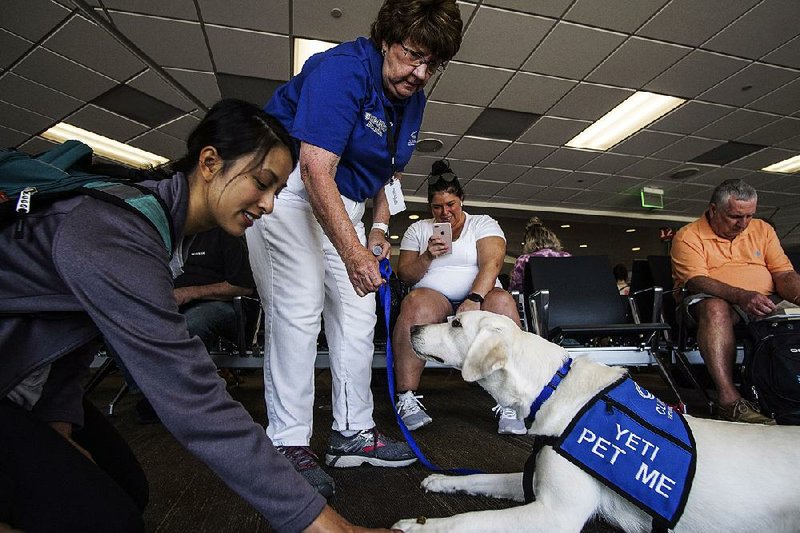 Caroline Chen (left) of Little Rock, who was flying to Seattle, gives some treats to Yeti, a Labrador, as Georgann Freasier, Yeti’s handler, looks on, in the waiting area at Bill and Hillary Clinton National Airport/Adams Field on Thursday.

Sophia Nielsen, 10, who was heading back to San Francisco, pets Tula, one of the therapy animals at Bill and Hillary Clinton National Airport/Adams Field in Little Rock on Thursday.

At airports, passengers routinely see bomb-sniffing dogs with uniformed handlers and give them a wide berth. Other canines spotted at airports are service dogs, clearly at work helping their handlers negotiate life.

But a new breed of dogs showing up at airports has only one task: To be petted. By anyone.

The Bow Wow Buddies teams that recently began roaming the concourse and other areas of Bill and Hillary Clinton National Airport/Adams Field are the latest therapy dogs enlisted to ease the stress of modern air travel if only for a few moments.

Tula and Yeti were all it took for Gloria Jordan of Monticello to stop making her way down the concourse to catch a flight to Denver for business.

Jordan suddenly stopped when she spied Tula, a miniature poodle, and Yeti, a white Labrador retriever, and bent down to pet them.

Jordan left with a smile.

“I love dogs,” she said as she resumed her walk to her gate. “It’s wonderful that people can do this.”

Jordan also was impressed with the dogs’ behavior, which she said reflected their “good training.”

She recalled another handler who recently encountered a girl who was upset at the prospect of taking her first flight. Then she met a dog.

“Now she’s smiling,” Freasier said. “She’s not thinking about flying. I think there are a lot of benefits” from the program.

Tula’s handler is Meredith Catlett, a Little Rock attorney who also is a member of the Little Rock Municipal Airport Commission, which sets policy for the airport.

Catlett is a co-founder of an organization called ABLEPaws, which is affiliated with a 40-year-old national organization called Pet Partners, and dedicated to putting to everyday use the benefits of the human-animal bond. Research has found that time spent with animals reduces blood pressure, and lowers stress and anxiety levels.

Teams from ABLEPaws, which has about 60 members, are frequent visitors to area hospitals, youth homes and other sites in the Little Rock area. All of the members volunteer their time free of charge.

Catlett said the Bow Wow Buddies program was developed after Shane Carter, the airport spokesman, read about similar programs at other airports and knew of Catlett’s involvement in ABLEPaws.

Carter said he looked to Reno-Tahoe International Airport in Reno, Nev., which has Paws for Passengers, for guidance in establishing a pet therapy program at Clinton National.

The goal is to improve the airport experience for passengers.

“You want people when they come to this airport to feel a sense of community, that we are a close-knit community trying to do good things,” Catlett said. “Here you have local volunteers bringing their pets in, trying to give their people a smile, make them feel good. Maybe they’re having a bad day, maybe their luggage is slow to arrive.”

The state’s largest airport has experience with volunteers. Its Angels Squadron is a group of volunteers sporting red vests who are stationed around the airport to offer assistance to passengers or answer questions about the airport and the city.

The Bow Wow Buddies teams, which consist of a dog and its handler, now number about 20. The handlers wear blue shirts and the dogs wear blue vests to identify them as airport personnel.

In case anyone has doubts about the dogs’ role, each vest worn by the dog includes the phrase, “pet me” as well as their names.

The therapy “work” is no walk in the park for the handler or the dog.

“The training is up to the handler, whether they work with a professional or they do it themselves,” Freasier said. “Once the training is complete enough that they feel this dog likes people, likes to go and visit them, they have to take an eight-hour class on things like HIPAA, infection control, how to be respectful, active listening, how to watch your animal while you are speaking to somebody.”

Not all dogs are suited for the therapy field.

“They have a 40-minute, pretty intensive examination with two evaluators who have been trained as evaluators to look at the temperament of the animal, look at whether they can lie down on command, whether they cannot jump on somebody’s lap if they have Kentucky Fried Chicken,” Freasier said. “We test for temperament. Can the animal withstand sudden noises, unusual smells? Can they be around another dog?”

The dogs and handlers are retested every two years. Some dogs tire of participating and are retired.

It seems that the dogs and especially their handlers get as much out of the experience as the passengers do.

“It’s a volunteer activity that I get to do with my dog, who is my favorite being to be with, and make people happy,” Catlett said. “It’s not a huge thing. It’s not going to change the world. But it will make a few people smile.” 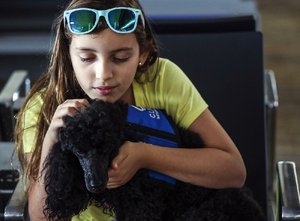 Photo by Mitchell PE Masilun
Sophia Nielsen, 10, who was heading back to San Francisco, pets Tula, one of the therapy animals at Bill and Hillary Clinton National Airport/Adams Field in Little Rock on Thursday.
ADVERTISEMENT