More than $300,000 spent on high-tech parking management system at UA 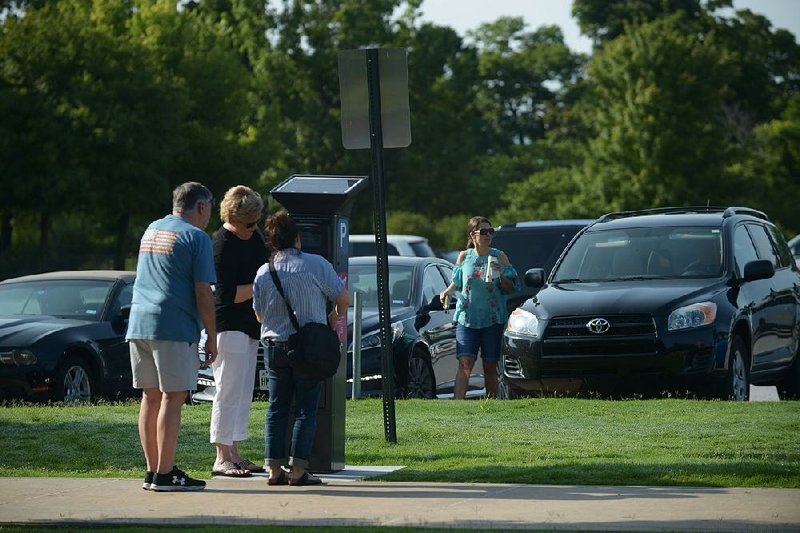 Visitors read instructions Saturday on a paid-parking kiosk for Lot 71 on the University of Arkansas, Fayetteville campus. UA’s plans for a new high-tech parking management system have been delayed.

FAYETTEVILLE -- More than $300,000 has been spent by the University of Arkansas, Fayetteville on a new high-tech parking management system once expected to be ready by fall 2017 and now delayed for years.

The now-delayed implementation of license plate recognition technology aimed to boost efficiency, according to a 2017 UA announcement. Students and staff have seen campus parking not keep up with enrollment growth and also price increases for permits, now $660.83 for students seeking to park near where they live on campus.

Similar systems have been put in place at college campuses in other states. UA has spent $10,091.75 on travel by university staff to six campuses to learn about license plate recognition technology, Rushing said.

But implementation on the Fayetteville campus will wait until after the 2018-19 academic year as UA "needs to focus its technical resources" on a planned overhaul of human resources, payroll and other administrative computer systems, Rushing said.

"The university will not be using license plate recognition technology this academic year and will continue the use of parking stickers and printed tickets for now," Rushing said. The cost to UA for the windshield stickers used as permits in 2018-19 is $37,487, Rushing said.

"We were unable to resolve some technical challenges in the license plate recognition testing phase, delaying our anticipated time frame for launching the technology," Rushing said, explaining that the challenges involved connecting the NuPark system to UA's database system.

"In our case, the type of database we use and the way we exchange data required additional technical considerations," Rushing said.

NuPark provides similar parking technology and services to other campuses, including the University of Kansas, said Kevin Uhlenhaker, the company's chief executive officer and co-founder.

The NuPark contract described not only upfront equipment purchases, but also a five-year schedule of annual subscription payments ranging from $72,400 in the first year of the deal to $81,486.84 in year five.

Rushing said the items purchased so far will be used when the system is in place and there is no effort to get any money back. He said that "both parties have tentatively agreed to suspend further activities in the agreement."

Uhlenhaker said it "hasn't been negotiated yet" whether the annual subscription payment schedule will be followed as specified in the contract. He said that "at this point, the system is still up and able to be used."

As far as the cameras, Uhlenhaker said they are "not doing advanced imaging stuff."

By the time UA gets the license plate system up and running, "I would say they will certainly be less effective than something that was purchased two or three years later," Uhlenhaker said.

But the cameras "will still be usable," he said, adding that "it's certainly not wasted money, by any means."

In bid documents submitted to UA before the contract was signed, NuPark said its "uParkCampus system can be implemented within 90-120 days of contract signature."

Uhlenhaker said the statement was not misleading. After inking a deal with Rutgers University in New Jersey, "their system was up and running in about three months," he said.

"We have been using the NuPark software for selling permits and enforcement since the day after Memorial Day this year. We are happy with the product," Jack Molenaar, senior director for Rutgers' Department of Transportation Services, said in an email.

Gary Smith, UA's director of transit and parking, told the university's staff senate earlier this month about the latest delay, Jeremy McAtee, the staff senate's chairman for parking, transit and safety, said in an email.

Smith back in August 2016 described to UA staff plans for a car-mounted camera system that would do away with sticker permits. Parking department vehicles mounted with cameras would cruise the lots, recording plate information to be read via software.

The system would be "more efficient and probably catch more people" parking without permission, Smith said in August 2016 during his presentation to the staff senate.

In May 2017, UA announced July 1 as the scheduled start date. A campus-wide announcement made via email said UA was "adopting a state-of-the-art, real-time 'smart' system to make parking operations on campus smoother and more efficient."

But in August 2017, after UA pushed back implementation without giving a new start date, Smith told the Democrat-Gazette that the university had underestimated the work involved, noting "a lot of things that have to be set up in the new system."

In December, Smith continued to speak about how the system would be more efficient, but said issues remained with syncing the online sale of parking permissions to UA systems. In the meantime, UA developed a privacy policy for managing data collected by the license plate recognition system, sometimes referred to as LPR.

Rushing said UA has purchased two vehicles for parking lot staff "currently being used for patrolling parking lots and working special events," with the vehicles to be used later for the license plate recognition system.

The purpose of the trips, each involving four UA parking representatives, was "to learn about LPR through first-hand experiences and discussions at institutions where the technology is being utilized," Rushing said.

David Lieb, a Denver-based consultant with Walker Consultants, said "more and more campuses are introducing LPR as a tool for managing parking."

The agency has done work for UA in the past but was not involved with the NuPark deal, Lieb said.

Changes involving UA's financial, human resources and other administrative systems are also taking place at more than 15 schools in the University of Arkansas System, according to a UA announcement.

Several schools have raised student fees to help cover the upfront costs of the Enterprise Resource Planning information technology, but UA System President Donald Bobbitt said in May it "has the potential to save the System between $60-$90 million once fully implemented."

McAtee, with the UA staff senate, said in an email that despite "a little confusion," there has been "very little" effect on employees because of the delay in implementing license plate recognition technology.

"A little more communication would have been nice. But overall, parking is the same," McAtee said.

He noted concerns about parking permit rates, however.

Since fall 2016, student resident reserved permits have increased in price about 5.5 percent to $660.83 for the nine-month school year, according to rate information from the University of Arkansas System Board of Trustees.

Rushing, asked if any of the price increases had to do with spending on the license plate recognition system, said "not at all."

He said parking decks built on campus within the last 20 years, including the Garland Avenue Parking Garage, "were built with an assumption of annual permit increases to cover the cost of the debt service."

Rushing said UA continues to look "for ways to keep those rates as low as possible while paying the debt service and also accounting for increased maintenance and labor costs due to the university's growing parking inventory and inflation."

An annual transit report for 2017, the most recent available, compares 2016-17 academic year rates at UA with averages for other Southeastern Conference schools. The data could not be verified by the Democrat-Gazette, but the report listed UA's student reserved rate for that year as $627, higher than the $553 "SEC Average," while the student permit rate of $97 was below the $238 "SEC Average."