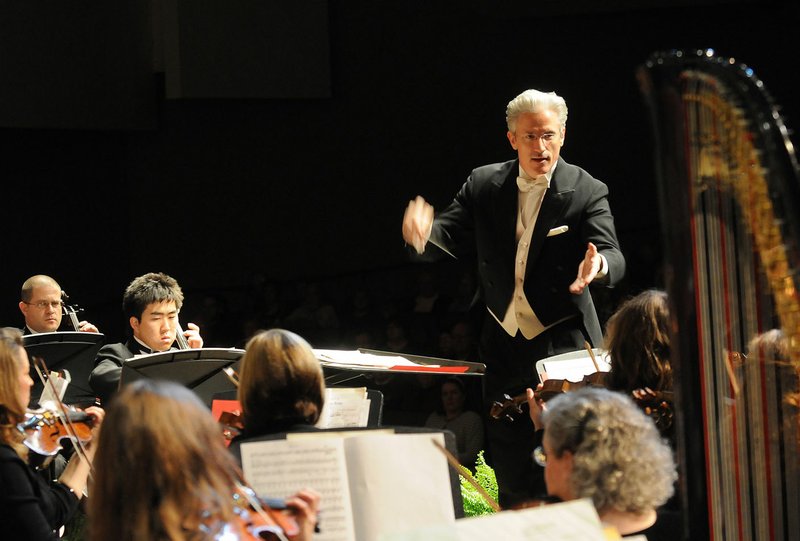 File Photo Under the baton of music director Steven Byess, the Arkansas Philharmonic Orchestra has planned a season that welcomes families to attend.

You're never too young for classical music.

At least, that's what Jason Miller believes. And as executive director of the Arkansas Philharmonic, he's putting his programming where his opinion is in this, the orchestra's ninth season.

Sept. 29 — “Halloween Fantasia”: Including “Devil’s Dance” from “The Witches of Eastwick”; Grieg’s “In the Hall of the Mountain King”; “Witches, Wands and Wizards” from “Harry Potter and the Prisoner of Azkaban”; and Wagner’s “Ride of the Valkyries,” 3 p.m., Arend Arts Center in Bentonville.

"We're making a very conscious effort to be as family friendly as possible," says Miller. "We believe there's a stigma, if you will, that orchestra concerts are stuffy and for adults only, and that is not the case at all, especially with the APO. We really want the entire family to come and enjoy the concerts.

"We have programmed some family-friendly concerts in the past," he adds, "but we also have realized through that that there are going to be some kids who can't sit through an entire concert. That doesn't bother us -- but we understand it might bother the parents. So for the first time ever, we've created a Classical Kids' Club, which will take place in a room right off the [Arend Arts Center] lobby that will be easily accessible to parents. They can check the kids in, teaching artists will welcome them, they'll have games and fun and room to run around, but they'll also be learning about the music."

"We'll be listing the length of every movement, so if you see a 17-minute piece coming, you could check them in to the Kids' Club [at intermission]," Miller says. A fee of $5 per concert gives a child a reserved seat in the hall and access to the Kids' Club, which Miller describes as a "fun learning environment appropriate for ages 5 to 12."

"It's the Sunday school method for orchestra concerts," he says. "It just seems so logical! Why haven't we done this before?"

Under the baton of music director Steven Byess, the season opens with a particularly family friendly performance titled "Halloween Fantasia" in September, and December will see the return of the popular Christmas concert.

"We had one year off, we tried something different, and it was wrong," Miller says simply. "Everybody loves Christmas with the APO, and we've added a matinee on Sunday, Dec. 16. That's another way we're trying to be more family friendly -- more matinees."

The APO is also continuing its dinner series, "An Evening With the Maestro," which Miller says was quite successful in the past.

"We have added three dates this season and are partnering with innovative chefs in the area to bring a delightful mix of music, food and wine," he explains. "It truly is an unique gastronomical event that is highlighted my our APO musicians. Make sure to sign up for our email newsletter to hear where our next dinner will be."

And the APO will help christen a new concert hall in the second half of the season.

"We're at the Arend Arts Center for the first three concerts, then perform in April at the brand new Bentonville West Performing Arts Center in Centerton," he says. "That will be a really exciting evening with a concerto by Michael Daugherty, commissioned for the Nashville Symphony and based on four of Hemingway's novels.

"There really is something for everyone this season."