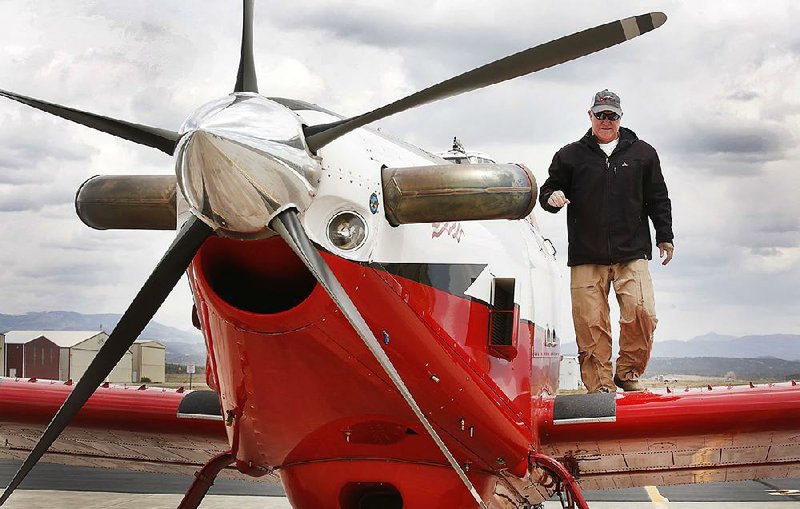 Joel Hampton of Stuttgart checks his Air Tractor 802 at the Durango Air Tanker Base in Colorado before a firefighting sortie in May.

At least three Arkansas pilots are working as aerial firefighters out West this summer.

They are flying the same type of airplanes that are used to dust crops in the Arkansas Delta -- Air Tractor 802's.

But instead of crop-dusting, they are dropping fire retardant or water over forest and grassland fires in Colorado, Idaho and Washington state.

Joel Hampton of Stuttgart said he has worked on about 40 forest fires this year. He's based in Rifle, Colo., during the four-month summer fire season, which is June through September.

"The job, the mission, is fun," he said. "I really enjoy this work out here."

The most rewarding part, he said, is helping save someone's home from fire.

Hampton is working this year for the Colorado Division of Fire Prevention and Control through a company called CO Fire Aviation. The previous two years, he flew on a federal contract fighting fires for the Bureau of Land Management in Colorado, Wyoming and South Dakota.

Operating under the Department of the Interior, the Bureau of Land Management manages more than 245 million acres of public land primarily in 12 Western states, including Alaska.

When lightning strikes and a fire is just starting, he said, there might not be enough time to get a large tanker aircraft from Denver before the fire gets out of control.

"The baby's easier to handle than the monster," he said. "That's the concept of having these airplanes out across the West, these crop-dusters."

Hampton said he spent 21 years in the Air Force, earning several medals, including the Bronze Star, after flying 520 combat hours out of Kandahar, Afghanistan.

When he retired from the Air Force, Hampton took a job in the United Arab Emirates.

"They wanted me to go over there and teach them how to drop bombs from crop-dusters," he said.

It was a new program in which they wanted to use Air Tractor 802's for military purposes, Hampton said.

"It was through this program that I learned to fly Air Tractors," he said. "Never dreamed that would eventually open a door to firefighting opportunities."

There are about 90 small airplanes -- called single-engine air tankers -- configured for firefighting that are available in the United States, said Randall Eardley, a spokesman for the Bureau of Land Management's national Fire and Aviation program. There are about 160 pilots certified to fly those planes for firefighting, he added.

Instead of spray booms on the wings, single-engine air tankers have been adapted with tanks and bottom-release doors. A "small handful" of the 90 planes are contracted to specific states, but the vast majority of them are contracted to the Bureau of Land Management, Eardley said.

Of those 90 airplanes, all but four are Air Tractor 802's, he said. Three are Turbine Dromeders and one is an Air Tractor 602.

Fifteen of the 802's are on "floats" so they can land on water, Eardley said. They are configured as "scoopers." They refill with water by skimming on the surface of rivers and lakes.

Until recently, the Bureau of Land Management relied heavily on surplus military bombers for fire-retardant aircraft, but "years of dropping bombs and torpedoes and then heavy loads of retardant took a toll on air frames," Eardley said.

"We literally started seeing wings fold up and fall off during retardant runs, and we completely shut down the entire air tanker program for a period of time while we assessed what was going on," he said. "We have discussed purpose-built aircraft for firefighting for years, but the economics just never penciled out."

Certification to be an aerial firefighter for the federal government requires meeting certain requirements, Eardley said.

Ongoing training is also required. Eardley said the Office of Aviation Services certifies pilots and aircraft for the Department of the Interior.

Pilots who are working on state contracts are often required to meet the federal requirements for certification, Eardley said.

"Typically, states will specify in their contracts that the aircraft and pilot need to meet interagency 'carding' requirements, which means they need to be certified to work on federal land," he said. "Land ownership and jurisdictions are so intermixed in so many areas of the West, it would be tough to have an aircraft not certified to work across the landscape."

So far this year, single-engine air tankers at the federal and state level have flown more than 11,000 hours, completed more than 10,000 sorties and dropped more than 11 million gallons of fire retardant or water, Eardley said.

Nathan Higginbottom of Poughkeepsie, Ark., has been dousing fires in Washington state this summer.

"They really like this Fire Boss here because they have plenty of water, and it's a very effective aircraft," he said. "You've got to have a water source for them. They scoop 800 gallons in about 15 seconds. You land on the water and you run at about 65 knots on the water."

Higginbottom is working for the Washington State Department of Natural Resources through a company called Dauntless Air.

Higginbottom's experience with float planes started in 2008 when he lived on the White River and flew his Cessna 180 on amphibious floats to work in Batesville.

In 2011, he went to Alaska where he flew float planes until 2013 and then came back to Arkansas, spending the next two summers crop-dusting.

Higginbottom began his aerial firefighting career in De Queen in 2015. He flew a single-engine air tanker for Aero Tech Inc., a company based in Clovis N.M., on a private contract protecting Weyerhaeuser timberlands in southwest Arkansas and southeast Oklahoma.

He got certified through the Office of Aviation Services and has spent the past three fire seasons flying on federal and state contracts throughout the western United States.

Higginbottom began working this year's fire season in Minnesota, then went to Washington.

"It's a lot of fun when you're flying," he said. "The worst part of the job is sitting around waiting. It's challenging. You feel like you have a purpose. You're putting fires out and protecting people's houses."

Matt Cunningham of DeWitt is an aerial firefighter in Idaho, where many fires are on grassland instead of forestland.

Based in Mountain Home, Idaho, he said there is National Forest land to the north and Bureau of Land Management grazing land to the south.

Cunningham studied to be a pilot while working on his bachelor's degree at Henderson State University in Arkadelphia. He said he flew a crop-duster for a while, then worked for a decade with a U.S. State Department's air wing, then returned to crop-dusting.

"I was willing to stay at home and continue to crop-dust, but the fire work is very rewarding," he said. "To go out there and help save somebody's house and livelihood is really rewarding. People really just appreciate what you do. In crop-dusting, people don't understand what you're doing. They think 'dangerous chemicals.'"

After fighting fires, "you feel good about yourself at the end of the day," he said.

Cunningham said he is working for Aerial Timber Applicators of Cooperstown, N.D., and is on call for Department of Interior firefighting.

"It's a pretty neat orchestrated ballet between the air tankers and the guys on the ground so everybody can accomplish the mission they need to accomplish," he said.

The Air Tractor 802's are unique because they are steered by a tail wheel instead of a nose wheel, Cunningham said. He said he has more than 12,000 hours of tail-wheel time, mostly from his 15 years of crop-dusting.

While crop-dusting is good experience for aerial firefighting, pilots also need mountain flying time, Cunningham said. He said it's easy to get disoriented flying in the mountains and think you're going down when you're really going up.

Cunningham said 747 Supertankers make for dramatic photos and videos when they drop fire retardant over fires, but Air Tractors can go places the big planes can't. 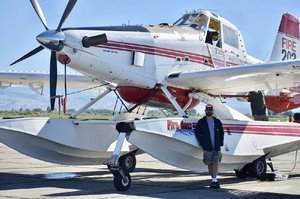 Photo by Special to the Democrat-Gazette courtesy of Marcia Roberts
Nathan Higginbottom of Poughkeepsie poses with his amphibious scooper air tanker, an Air Tractor AT-802 Fire Boss, that he flies in the state of Washington. Higginbottom began flying float planes in 2008 when he lived on the White River.