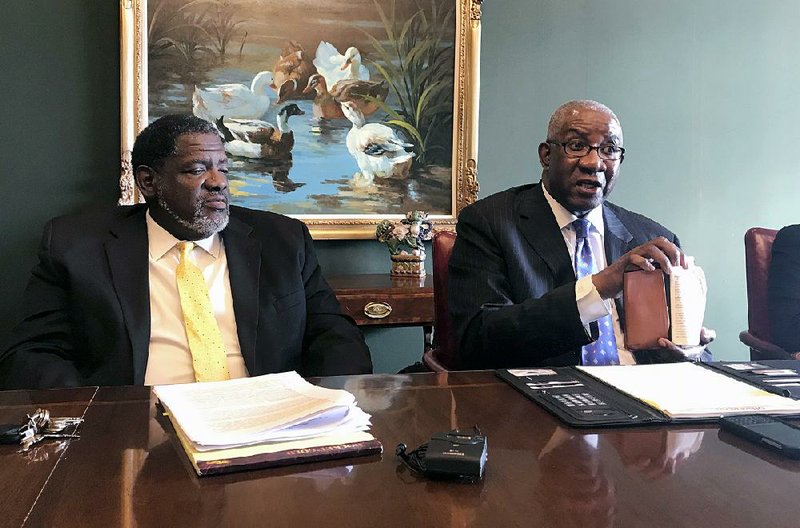 FILE — Pulaski County Circuit Judge Wendell Griffen, right, holds a copy of the U.S. Constitution during a 2018 news conference in Little Rock after a hearing before a judicial ethics panel.

The Arkansas Judicial Discipline and Disability Commission heard arguments Friday on whether to drop ethics charges against Pulaski County Circuit Judge Wendell Griffen stemming from his Good Friday protest against the death penalty in 2017.

Griffen's attorney, Austin Porter Jr., argued at the hearing that the U.S. Supreme Court has been clear in its stance that judges retain their First Amendment right to speak out on issues of public concern.

He said Griffen's views on the death penalty -- which the judge says are religious in nature -- do not preclude Griffen from fairly considering cases involving executions.

On the same day as his protest in April 2017, Griffen ruled in a case involving the state's execution drugs. The ruling temporarily threatened to halt scheduled executions from taking place. Griffen's order was overturned by the Arkansas Supreme Court and assigned to another judge, who reached the same conclusion as Griffen. That judge's order also was overturned by the justices.

Rachel Michel, a special prosecutor from Mississippi hired by the disciplinary commission to investigate Griffen's actions, said at Friday's hearing that Griffen clearly violated Arkansas' judicial canons barring activities that would "appear to a reasonable person to undermine the judge's independence."

The commission adjourned Friday after hearing the motion to dismiss and to consider whether to proceed with a trial later this year. No decision was made by late Friday.

After the commissioners adjourned, Griffen and his attorneys raised further issues with the investigation, which has gone on for more than a year.

During the hearing, Michel, the prosecutor, repeatedly referred to Griffen by his first name, as "Judge Wendell." In a press conference after the meeting, Griffen said the references reflected "cultural incompetence" and disrespect given to black Arkansans that Griffen said was widespread early in his life.

"It's ironic that the [judicial commission] brought over a lawyer from Mississippi to address me by my first name," Griffen said.

The judge added that he would not have tolerated a similar lack of courtesy titles in his courtroom. He said the commissioners should have corrected her.

A message left with Michel's offices at the Mississippi Commission on Judicial Performance in Jackson was not returned Friday.

If his motion to dismiss is denied, Griffen's legal team said they would pursue a discovery of records related to the Arkansas Supreme Court's 2017 decision to strip Griffen of his eligibility to hear death penalty cases. Last fall, Griffen filed suit in federal court against the seven state Supreme Court justices for that decision, though the case was dismissed by an appellate panel last month.

In response to a reporter's question Friday, Griffen said he did not plan the protest in April 2017 with the intent of sparking a public debate over judicial ethics. He described the protest as a "pastoral decision ... entirely consistent with my notion of the religion of Jesus."