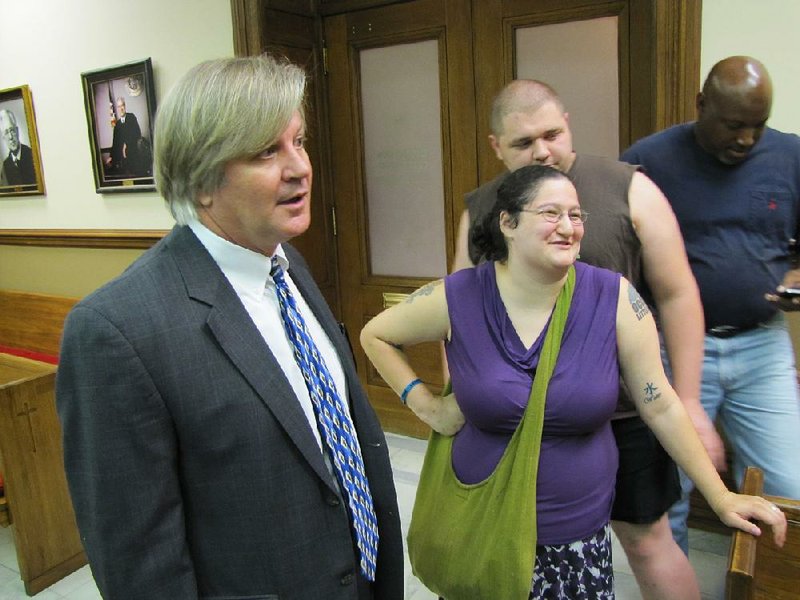 Attorney David Couch (left) is shown with Kaitlin Lott in this file photo.

A proposed initiated act to gradually raise the state's minimum wage by $2.50 an hour by 2021 will be on the Nov. 6 general election ballot, Secretary of State Mark Martin reported Thursday.

Leslie Bellamy, director of elections in Martin's office, said the office determined that the Arkansans For A Fair Wage ballot committee, led by attorney David Couch of Little Rock, turned in 84,526 valid signatures of registered voters. That's more than the 67,887 signatures required under the Arkansas Constitution to qualify the measure for this year's ballot.

The federal minimum wage is $7.25 per hour and, of the states bordering Arkansas, only Missouri's minimum wage of $7.85 per hour is higher than the federal level. A proposed ballot initiative in Missouri would gradually increase that state's wage to $12 an hour in 2023.

"I think we'll have the ability to communicate our message to every voter in Arkansas," he said. "I don't think anything is a slam dunk [to get approved by voters], but it polls very well."

The proposal has support from outside the state. Through July 31, the Arkansans For A Fair Wage committee reported raising $505,300 in contributions and spending $475,357.58. So far, its largest reported contributions are $350,000 from the Sixteen Thirty Fund; $100,000 from the Fairness Project; and $50,200 from the National Employment Law Project. All are nonprofit groups in Washington, D.C.

Couch said he expects to see an attempt to kick the proposal off the ballot.

"I see where the [Arkansas State Chamber of Commerce] has filed a ballot question committee that seeks to have it disqualified," he said.

"If just over 1,209 signatures from the initial turn-in are declared invalid by the Secretary of State or by a judicial authority, the measure will NOT meet the requirements for certification to the ballot," the committee said in a document on "minimum wage facts."

But Couch countered, "While the secretary of state did allow the cure with a 1,209-signature cushion, if challenged, there are several thousand other signatures that were not counted that we believe should have been."

If the proposal passes, only California, Washington state, Massachusetts and Washington, D.C., would have a minimum wage at least as high as Arkansas, according to the Strong Economy committee. The District of Columbia's minimum wage is $13.25 per hour; Washington state's wage is $11.50; and the wages in Massachusetts and California are $11 per hour, according to the National Conference of State Legislatures.

But Couch said that "comparison is not accurate because we don't immediately go up to $11, but it is phased in over time."

Asked if he's opposed to the proposal, Gov. Asa Hutchinson told reporters on Thursday, "I have always said that we ought to periodically raise the minimum wage.

"I prefer that it be done by legislative enactment versus putting it on the ballot periodically. It's easier to adjust on a regular basis versus setting now what [is] going to happen over the next three years and incremental increases when you don't know what the state of the economy is going to be, so it's not my preference," the Republican governor said.

"That's my comment for now. As to how I'll vote, I'll probably make that more clear down the road," Hutchinson said.

The Legislature last raised the minimum wage in 2006.

In a special session called by then-Gov. Mike Huckabee, the Democratic-controlled Legislature and Huckabee, a Republican, raised the wage from $5.15 to $6.25 an hour. That led to the abandonment of a campaign by supporters of a proposed constitutional amendment to raise the wage to $6.15 and require the state to annually adjust the wage according to the cost of living.

Democratic gubernatorial candidate Jared Henderson said Thursday that "the governor has never been consistent on his support for raising the minimum wage as we saw him flip-flop on his position during the 2014 campaign and as he continues to dodge the issue now, but I am proud to stand with working Arkansans in support of this measure."

In September of his successful 2014 campaign for governor, Hutchinson said he planned to vote for the wage proposal then on the ballot "even though it is not the ideal way to raise the rate, I will vote for it because it is in line with the main objective of raising the minimum wage in Arkansas, which I have consistently supported."

But in December 2013, when that proposal was first submitted to the attorney general's office for approval, Hutchinson said he opposed it.

Democratic Attorney General candidate Mike Lee, who supports the change, said in a written statement, "I am thrilled that Arkansans have overcome the roadblocks put up by my opponent. Arkansans have a right in the constitution to propose ballot items.

"Attorney General Leslie Rutledge repeatedly denied attempts to allow petitioners to gather signatures to place this issue on the ballot. The Arkansas Supreme Court finally stepped in, telling her she must authorize the ballot language or rewrite it herself," he said.

In response, Rutledge said, "As I've stated previously, I will work with the legislature to ensure that Arkansans have a clear and certain path to place matters on the ballot and replace the current confusing and time-consuming process.

"I will continue creating a pro-growth, pro-jobs environment for Arkansans by defending our State against criminals, con artists, and overreaching government regulations," the Republican attorney general said in a written statement. Her campaign statement didn't state a position on the wage proposal.

"Hard-working Arkansas families are long overdue for a raise. Many are working multiple jobs and still unable to afford life's basic needs," Tucker, who is a state representative, said in a written statement. "We have a lot of work ahead of us to address all of these important issues, but this specific proposal certainly improves the ability of hard-working Arkansans to earn their way through this world, and that is why I support it."

Other measures approved for the ballot are:

• Issue 1, which would limit attorneys' contingency fees; limit noneconomic damages to $500,000; cap punitive damages, with certain exceptions, to the greater of either $500,000 or three times the amount of compensatory damages awarded; and allow the Legislature to amend and repeal the state Supreme Court's rules of pleading, practice or procedure with a three-fifths vote.

• Issue 3, which would limit state representatives to three two-year terms and senators to two four-year terms and all lawmakers to serving a maximum of 10 years in the Legislature.

Amendment 94 to the Arkansas Constitution, approved by voters in 2014, allows lawmakers to serve up to 16 years. Senators, who draw two-year terms after once-a-decade redistricting, are allowed those beyond the 16-year limit.

Another proposed constitutional amendment would authorize the state to issue licenses for four casinos. Those backers have until Aug. 24 to turn in roughly 15,000 more valid signatures needed to qualify the proposal for the ballot. If that casino proposal qualifies, it would be Issue 4 on the ballot, said Chris Powell, a spokesman for Martin's office.

The proposed initiated act to raise the minimum wage will be Issue 5, regardless, Powell said.