Black Oak, population 262, has earned a small spot on the nation's library shelves and its music charts. Now the tiny northeastern Arkansas community is hoping for an economic renaissance, as well.

The hometown of writer John Grisham and the namesake of a rock 'n' roll band received a $1.9 million federal grant this week to build a wastewater collection system. Coupled with a $687,000 federal low-interest loan, the Craighead County hamlet will have enough money to ship its wastewater 5 miles north to Monette, population 1,501.

The money will move Black Oak into the 21st century, says a city councilman. The cost will be $19,378 per customer.

"It's kept us from growing for years and years and years. Adding sewer will really add new life to our community," he said. The mayor said the use of septic tanks will cease.

Dunigan, who is running for re-election this year, is eager to get started.

"We're hoping to begin construction shortly after the first of the year if we can get everything worked out," he said. "Maybe by next September, a year from now, we'll be able to go online and get going."

Black Oak residents have been talking about updating their wastewater system for decades, city officials say. One of the arguments even ended in a homicide, according to news reports.

The $2.6 million aid package is coming from the U.S. Department of Agriculture. The agency this week announced that it is awarding $124 million in loans and grants to communities in 23 states.

The money will "finance drinking water, stormwater drainage and waste disposal systems for rural communities with 10,000 or fewer residents," it said in a news release.

No other Arkansas towns were included on the list.

Black Oak residents will repay the $687,000 loan over the next four decades at an annual interest rate of 2.375 percent.

In its announcement, the USDA said the new collection system will serve 135 users in Black Oak and the surrounding countryside.

"Most of the individual users' septic systems are malfunctioning. This project will construct a public wastewater system that meets current health and sanitary standards," it stated.

On Tuesday, Hutchinson said he was glad to lend a hand.

"My office was delighted to assist Mayor Dunigan and the town of Black Oak in acquiring this USDA Rural Development grant for a new wastewater treatment plant," the governor said in a written statement. "These grants make a big difference, especially to our state's smaller communities, and, in this case, this new plant will serve not only Black Oak but the neighboring town of Monette, as well."

It gained a small dose of fame in the 1970s, thanks to some local musicians and their band, Black Oak Arkansas. Several of its albums sold well, and its single, "Jim Dandy" peaked at No. 25 on the Billboard charts in February 1974.

A 2001 novel by Grisham, A Painted House, also focused attention on Black Oak.

The town is peaceful, city officials say, though there was one act of violence that made headlines nearly two decades ago.

In 1999, 75-year-old Clay Wallace Jr. fatally shot Robert Qualls, 65, after the two men debated the merits of a new sewer line, according to an article by Reuters.

Before things degenerated, they'd been drinking coffee at a Black Oak restaurant, according to the news report.

The restaurant where the argument began shut down years ago.

The town's Main Street hasn't been a commercial hot spot for decades.

There are still three houses of worship, however. Downtown is sandwiched between the Church of Christ to the south and the Assembly of God to the north. The Baptists worship somewhere in the middle.

There's a city park, a veterans monument, a City Hall, a post office and a cotton gin.

A mural is being painted, and efforts are underway to open a museum, Dunigan added.

"I think it's going to be a great impact on the community. We're moving into the 21st century, more or less, in the way I see it," he said.

"The mayor has worked diligently. He's kept his nose to the grindstone, and he's really put a lot of work into it," Hutchison said.

"What we're all hoping and praying for is that with a sewer system, we might entice some new growth," he said.

Black Oak is a great place to live, the councilman said.

Dunigan said he's thrilled that the grant has been approved.

Information for this article was contributed by Emily Walkenhorst of the Arkansas Democrat-Gazette. 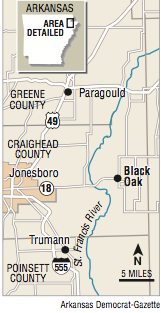 A map showing the location of Black Oak.