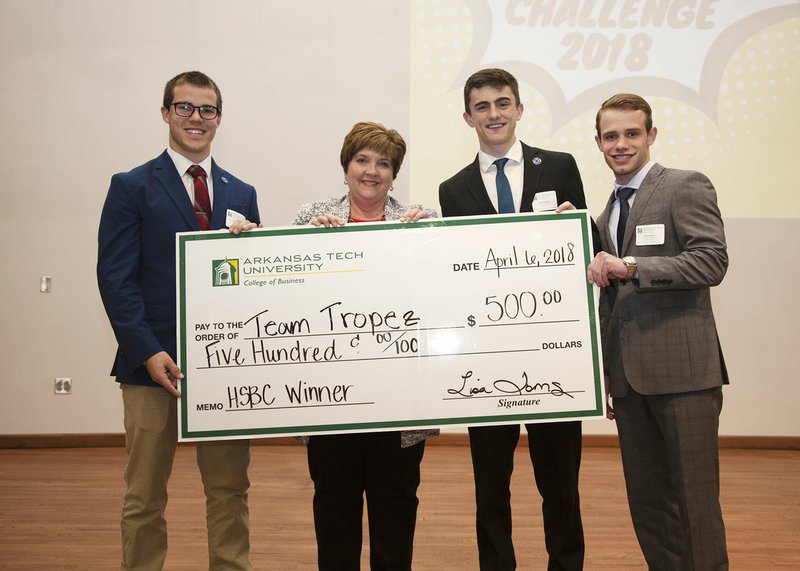 Courtesy photo A team from Farmington High School was the overall winner of the High School Business Challenge sponsored by Arkansas Tech University in Russellville. Team members (boys, from left) Caleb Williams, Coleman Warren and Tanner Green captured the $500 first prize. Cameron Waterman of Clarksville won a $500 book scholarship in recognition of her entrepreneurial spirit and presentation skills. The annual contest asks high school students to develop a marketable idea, create a business plan and then present the concept to a panel of judges. Criteria includes the quality of the business, organization and structure, marketing, profitability, resources and professionalism. Teams from Bentonville High School and Clarksville High School were among the finalists.

Luke Barber of Lavaca, a student at the University of Arkansas at Fort Smith, will serve as the 2018 John Paul Hammerschmidt Fellow. Barber will work in the office of U.S. Rep. Steve Womack, AR-3 and the inner workings of the legislative process through a curriculum earning him college credit. His duties will include extensive legislative research for Womack, attending hearings and interacting with the constituents of the congressional district.

The JPH Fellowship is named for former Arkansas Rep. John Paul Hammerschmidt (1966-1993), who died April 1, 2015. It is geared towards college students with an interest in public service.

Grant Reader and Ashley Massey, juniors at Northwest Arkansas Classical Academy, have been chosen for Governor's School, a six-week, summer residential program in the concentrations of math and visual arts, respectively, at Hendrix College in Conway. Applicants demonstrate creativity in academic or creative fields, possess above average ability in a particular discipline area, display a high degree of self-motivation and meet the intellectual, social and emotional maturity required to thrive in an environment that emphasizes theoretical and process-related learning.

The Bentonville Kiwanis Club has worked for 30 years with local schools in Benton County to recognize young people for their accomplishments in their schools and communities that touch the hearts and lives of others. The Kiwanis Club presents these awards to young people for their accomplishments which otherwise may not have been acknowledged or recognized. The Kiwanis Club recognized students at a special luncheon in their honor April 3 at Fulbright Junior High School in Bentonville.

Travis McCloskey of Bella Vista, an international business major, received a departmental honor from Arkansas State University in Jonesboro during the college's annual Convocation of Scholars honors banquet. The outstanding graduate awards were presented to the senior in each degree program who has most excelled in scholarship, leadership and service to the respective departments.

Sarah Sullivan of Fayetteville, a junior biochemistry major at the University of Tulsa, has received a Goldwater Scholarship for her research on the regulatory function of a well-known tumor suppressor protein on cancer cell metabolism. The award is given to students who demonstrate the potential to make significant contributions to their chosen fields.

Sullivan's personal experience as a type one diabetic led to her interest in the complex mechanisms that regulate metabolism, the structure and interactions of proteins and the pathways connecting biochemical, cellular and life processes. She has completed a DAAD German Academic Exchange internship at Johannes Gutenberg University in Mainz, Germany, attended the American Chemical Society's annual meeting and conducted research as a member of the Tulsa Undergraduate Research Challenge. Sullivan plans to pursue a doctorate in biochemistry and study the structural dynamics of protein glycosylation as it relates to cancer metastasis, immune system evasion and the development of cancer stem cells.

Students from the Bentonville-Ignite program won the statewide 2018 Arkansas ProStart Invitational management competition. The entire team will travel in late April to Providence, R.I., to compete at the 2018 National ProStart Invitationals. The Bentonville Ignite winning management team consists of seniors Robyn Surber and Ryan Le, and juniors Anna Harrison, Chloe Moore and Tim Farmer. Phil Dreshfield, a chef with Brightwater: A Center for the Study of Food, trained the team.

ProStart is a career-building program developed by the National Restaurant Association Education Foundation and gives high school students a taste for success in the restaurant and food service industry by blending classroom teachings with work experience.

Students in the theater program at Southern Arkansas University in Magnolia perform Hairspray from Thursday to Sunday on the school campus.

Arkansas Tech Who's Who

Forty students from Arkansas Tech University in Russellville have been selected for inclusion in the 2018 edition of Who's Who. The selection is based on academic achievement, service to the community, leadership and involvement in co-curricular activities. and the potential for continued success.