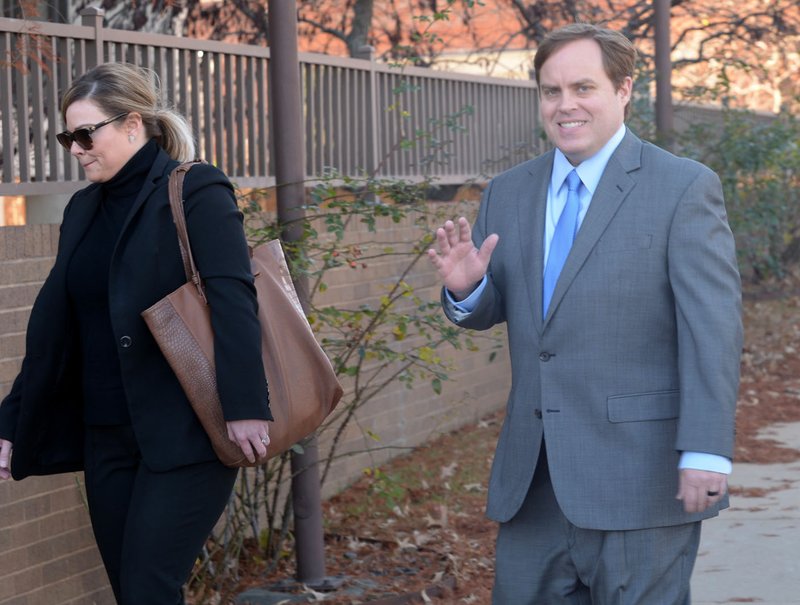 FAYETTEVILLE -- One of the groups at the center of former state Sen. Jon Woods' corruption trial wouldn't have qualified for the $400,000 grant it received, but administrators allowed AmeriWorks to borrow the tax-exempt status of another nonprofit company, Mike Norton testified Tuesday morning.

Norton, of Harrison, was director of the Northwest Arkansas Economic Development District from 1990 through 2014. In 2013 and 2014, federal prosecutors say Woods and three co-conspirators directed the district to award grants from the state General Improvement Fund in exchange for kickbacks. The development district administered the grants, which have since been ruled unconstitutional.

Norton, state Sen. Bart Hester, R-Cave Springs, and Mayor Tim McKinney of Berryville, who is a member of the Northwest development district's board, all testified Tuesday board approval was fictional and lawmakers controlled the grants. Direct lawmaker control of such local grants by awarding them in legislation had been declared unconstitutional in an even earlier state Supreme Court ruling.

McKinney testified quarterly board meetings rarely lasted more than an hour, had other business besides awarding grants and members received little information on the grants they were approving other than the name of the recipients, the amounts awarded and the lawmakers supporting each proposal. Grants supported by lawmakers got awarded, McKinney said. Grants without lawmaker support did not.

But the board had the legal authority to reject the grants, Woods' defense attorney brought out in cross-examination of Norton and McKinney. And Randell Shelton, Woods' co-defendant, played no role in getting these grants approved, his defense counsel got the witnesses to confirm.

"The board had the ability, they just didn't use it," Patrick Benca of Little Rock, Woods' attorney, said in cross-examination of Norton. "That's not Jon Woods' fault, is it?" Norton replied it wasn't.

Woods and former state Rep. Micah Neal, both R-Springdale, directed $400,000 in grant money to AmeriWorks, court and state records show. Neal pleaded guilty Jan. 4, 2017, for his role in the scheme and was the government's first witness in the case. Neal said he received $20,000 delivered by Woods for steering $125,000 to AmeriWorks. Grant records show Woods directed $275,000 to the company.

AmeriWorks was incorporated by lobbyist Russell "Rusty" Cranford and described in a grant application as a work-training program. Cranford, 56, is set for trial June 11 in federal court in Springfield, Mo., on one count of conspiracy and eight counts of accepting bribes in an unrelated indictment.

Records show AmeriWorks accepted the grant Sept. 26, incorporated Sept. 27 and deposited the $400,000 check Sept. 30. Since it wasn't incorporated and didn't have a 501(c)3 tax status as a nonprofit when it applied for the grant, Norton said he met with Cranford and Woods at Neal's Cafe in Springdale to discuss the issue. Micah Neal was in his family's restaurant at the time and joined the discussion as his time allowed, Norton said.

They agreed to use the tax-exempt status of Decision Point, Norton said.

AmeriWorks had no business address of its own and was having its grant correspondence sent to offices of Decision Point, a Bentonville-based nonprofit corporation that provides behavioral and substance abuse treatment. Cranford represented Decision Point as a lobbyist.

Decision Point staff helped file the grant, and the organization received the money on AmeriWorks' behalf. Cranford signed the application for the grants in question, according to state records and court documents. The grant checks from the Northwest district for the program were made out to "Decision Point d/b/a AmeriWorks."

That should never have been the case, Decision Point's parent company, Preferred Family Healthcare of Springfield, Mo., said last year when asked by the Northwest Arkansas Democrat-Gazette about its involvement.

"I have no idea why there is ever a reference to 'Decision Point dba AmeriWorks,'" said parent company spokesman Reginald McElhannon.

Despite the grants, AmeriWorks failed to gain additional financial support and never got off the ground, according to an August 2014 letter from Cranford to the Northwest district returning the $400,000, according to Economic Development District records. Cranford returned the money the day after federal investigators spoke to him, prosecutors said in court documents filed earlier in the case.

Woods was indicted in March 2017, accused of a kickback scheme involving such grants issued in 2013 and 2014. Two alleged co-conspirators -- Shelton, formerly of Alma, and Oren Paris III, former president of Ecclesia College in Springdale, were indicted with Woods.

Shelton played no role in the AmeriWorks grant, the government acknowledges. His defense argued unsuccessfully for a separate trial.

Norton confirmed on the stand Monday he resigned Sept. 27, 2014, at the request of the district's board because of the state of the district's finances. In particular, the board found money earmarked for transportation projects had been used to meet the staff's payroll, he testified. The board also found late payments to grocers who supplied senior citizen centers run by the district, he said. He didn't know of any kickback plan, he testified.

Norton also testified he downplayed the degree of control lawmakers had over the grants in written communications from the district so such records wouldn't be used against the grant program in court where its constitutionality was being challenged.

The kickback allegations also involve $550,000 of the more than $717,500 in state General Improvement Fund grants Ecclesia, a private Christian college, received from 2013 through 2014, the U.S. Department of Justice contends.

The trial of Woods and Shelton began April 9 in federal court in Fayetteville.

Paris pleaded guilty April 4 to one count of conspiracy and will testify for the government. He resigned as Ecclesia's president and from the college's board the previous day. His sentence is also pending.

Paris disguised the kickbacks as consulting fees paid to Shelton's company, Paradigm Strategic Consulting, according to the indictment. Shelton then passed the money along, the government contends.

Defense attorneys have said the money transfers to and from Woods were loans and money to pay back loans.

Woods directed a $200,000 grant to Ecclesia in September 2013, grant records show. Neal supported a $50,000 grant to the college and Woods another $150,000 in December 2014, also according to grant records. The amount of money Woods is accused of receiving as a kickback isn't specified in the indictment. It claims much of that money was paid in cash, except for one transaction made to Woods by wire transfer for $40,000.

In one transaction, Paris authorized $50,000 to Shelton's firm Sept. 27, 2013 -- the same day Paris signed an agreement for the college to accept a $200,000 state General Improvement Fund grant, the indictment says. Shelton used the $50,000 that day to open an account for his business, which had been incorporated the day before, the document reads.

Less than a week later, on or about Oct. 1, 2013, Shelton transferred $40,000 by wire from that business account into the personal bank account of Woods, according to prosecutors.

Hester was one of the lawmakers who used development districts as a "holding entity" to keep grant money to be used gradually throughout the two-year budget cycle as local needs arose, he testified. Woods was more prone to award his money quickly, then approach other lawmakers who still had money available later as needs arose, Hester testified.

Hester did award Ecclesia improvement grants in 2013 and again, at Woods' request, in 2014, Hester said. Hester awarded the grants because the college is in his district and, as a contractor, he could tell many of the buildings were in need of repair when he toured the facility. "Buildings were not finished, and the dorms were in disrepair," he testified. Many of the buildings' roofs needed replacing, he said.

The government has 22 witnesses remaining and will need five to six more working days to present its case, Assistant U.S. Attorney Kenneth Elser told the court. Then the defense phase of the trial can begin.