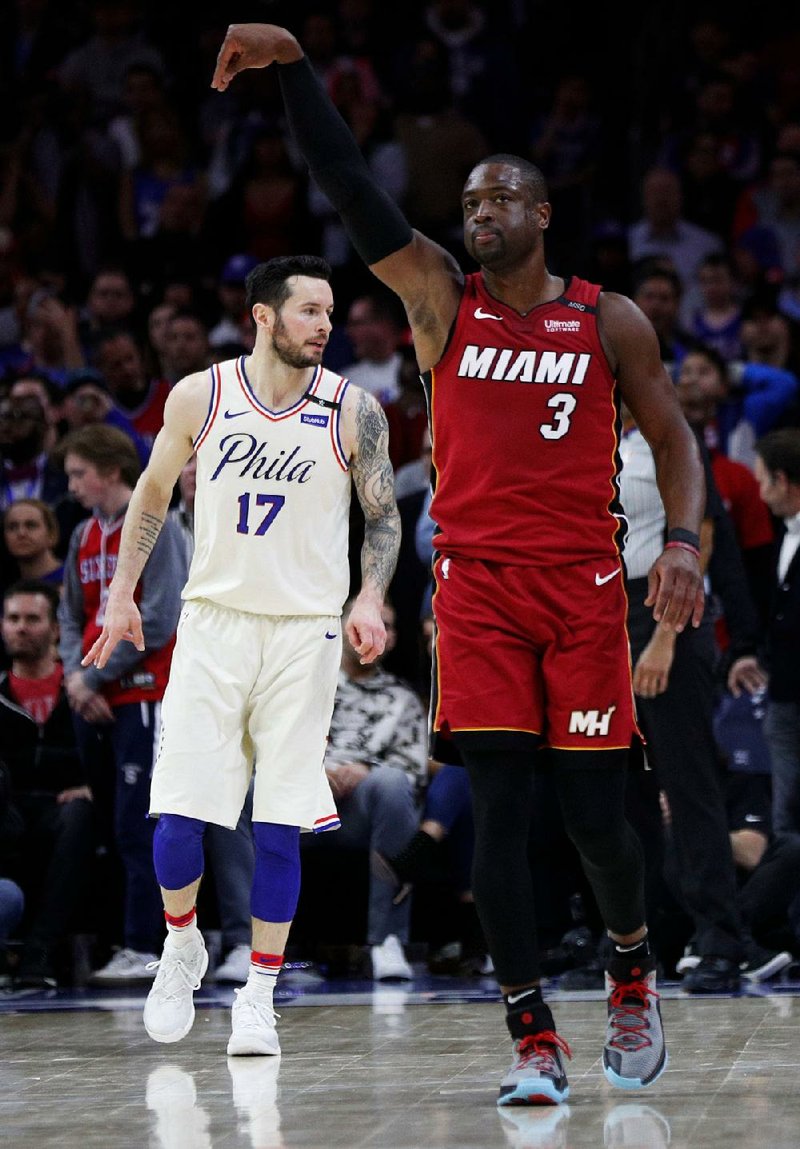 Miami’s Dwyane Wade scored 28 points in leading the Heat to a 113-103 victory over the Philadelphia 76ers on Monday night in the NBA playoffs.

PHILADELPHIA -- Dwyane Wade snuffed out one 76ers' rally by popping a 16-foot fadeaway with the shot clock ticking down. Wade made a halfhearted attempt at reaching his hand out toward a fallen defender before he scooted on his way.

Wade was up, the Sixers were down and suddenly, a series.

He turned in a vintage performance, scoring 28 points to end the 76ers' 17-game winning streak and lead the Miami Heat to a 113-103 Game 2 victory over Philadelphia on Monday night and even the first-round playoff series.

The 36-year-old flashed the form of a three-team NBA champion with the Heat, not the journeyman who bounced around the last two seasons with forgettable stints in Chicago and Cleveland.

Wade made 11 of 17 shots and put on a show in the second quarter and put it away in the fourth.

"He can settle the group with his experience, his championship experience," Spoelstra said.

The Sixers badly needed injured All-Star center Joel Embiid to settle them. The Sixers nearly pulled off a big comeback and rallied from 16 down to just two points late in the fourth.

Philly fans were going wild and suddenly the home-court edge that had made the Sixers unbeatable for a month seemed like it would perk the team back up for one more notch on the winning streak.

Wade made two big buckets down the stretch that pushed back the Sixers and tied the series as it shifts to Miami for Game 3 on Thursday.

The Sixers lost for the first time since March 13 to Indiana. They won 16 consecutive to end the regular season and the first game of the playoffs and played their 10th game in a row without Embiid.

Embiid went on Instagram after the game and wrote, "sick and tired of being babied."

Wade's play resembled his glory days at times and he carried the Heat in a sensational second quarter that was the difference. He pump-faked his way to 15 points in the quarter -- impressive enough, even moreso that he outscored the potent Sixers by two points.

Wade made his first seven shots of the game and passed Larry Bird for 10th on the NBA's career postseason scoring list.

The Heat slowed the game down -- exactly the kind of style where the Sixers needed Embiid in the middle -- and used a collective of defenders on Ben Simmons that rattled the rookie point guard early.

The passing-and-pushing offense that got the Sixers to the No. 3 seed in the East failed them for the first time since early March.

But there was life left in the fourth.

Saric was fouled by Wade and sank both from the line to make it 91-82 and he followed with a three the next time down that sent the crowd into a frenzy. Saric broke up a pass on defense that led to a Simmons dunk and suddenly 18 consecutive victories was within reach.

Wade contributed with baskets, assists and free throws over the final four minutes to close out the victory.

Simmons led the Sixers with 24 points and Saric had 23.

"I hate this feeling but maybe it's a good reminder for everybody for next game to lock in," Simmons said.

Goran Dragic scored 20 points and James Johnson had 18 for Miami.