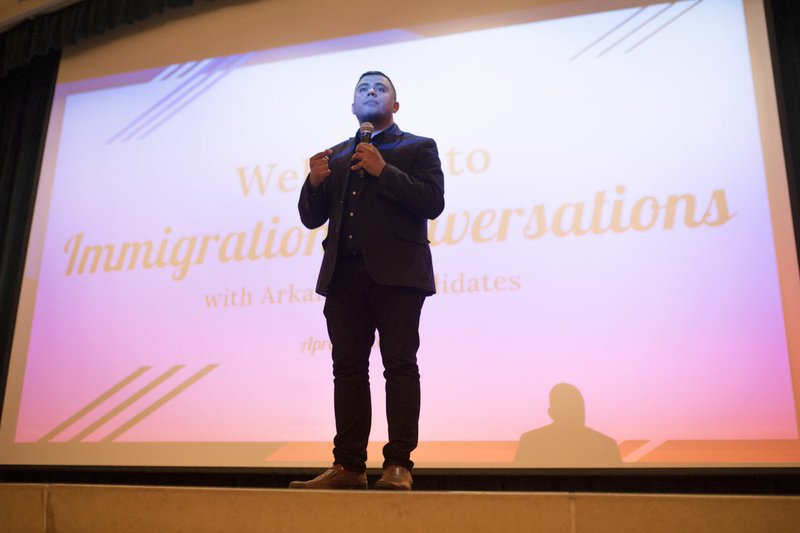 SPRINGDALE -- Dozens of political candidates from around the state gathered to learn more about immigration and workers' rights directly from immigrant speakers Saturday at The Jones Center.

The event was hosted by the Progressive Latinx in Arkansas Politics, an organization which focuses on empowering the Latinx community to get involved in local and state wide elections.

As a candidate in the 2018 Arkansas elections, I pledge to:

• Be an ally and choose to see immigration for the humanitarian issue it is.

• Stop using the term “illegal” when referring to undocumented/unauthorized immigrants.

• Make my website/campaign materials accessible to other languages.

• Host at least one meet and greet outreach event in my region or area.

• Consult with those directly affected before taking a stance on immigration legislation.

• Speak out against anti-immigration legislation.

• Educate and inform others on what I heave learned today.

Mayra Esquivel, an organizer and speaker, said Saturday's "Immigration Conversations" event was designed to put a face to issues immigrants from a variety of places around the world face in the United States.

"We've always known that the immigration conversations that have been happening at the federal, state and local levels have not always been accurate, because they are not being said by immigrant communities and individuals themselves who are going through these struggles and this fight," Esquivel said. "We knew it was important to get everyone together -- our colleagues, our fellow immigrant individuals, our fellow fighters -- all in one room for especially those who are aspiring to be elected officials."

Organizers said they want this to be the first step and officials should now take the initiative to reach out to immigrant communities.

"Even if some of us cannot vote, they still have a voice," Esquivel said. "Their power lies in their labor and in humanity itself."

Jared Henderson, a Springdale native, is a Democratic candidate for governor and former state leader of the Teach for America program. Henderson is challenging incumbent Republican Gov. Asa Hutchinson in this year's general election.

Henderson said Saturday's event taught just as much -- if not more -- than any day on the campaign trail.

"It just really opened our eyes to the reality that our immigrant population makes us stronger as a country," he said. "We are at our strongest when we celebrate diversity and we really promote inclusiveness, and that starts with understanding the real stories of our fellow citizens. It just deepens my convictions to fight for those things."

Humanity was a theme woven through the multiple speakers' comments, whether data or person-experience driven. Speakers represented documented and undocumented immigrants; children of immigrants; those from Mexico and across the Americas as well as Middle Eastern counties, India and the Marshall Islands.

About 43.2 million immigrants live in the United States. Most immigrants, 76 percent, are in the country legally, while a quarter are unauthorized. In 2015, about 44 percent were naturalized U.S. citizens, according to Pew Research Center data.

Organizer Sadaf Raza is from a Pakistani Muslim family. She will graduate from the University of Arkansas in May with plans to go to law school. She spoke about visa issues those coming from Muslim countries -- especially children -- face in the United States and about the hatred she has personally faced.

Indians offer skills that American companies want, and American employers have turned to the nonimmigrant H-1B visa to import them, she said.

More than 300,000 Indians -- including children -- are waiting for permanent residency cards as of June 2015, the latest year official data on H-1B visas is available. An H-4 visa is issued to dependent family members of H1 visa holders.

Those who have been in the process since 2008 are just now getting their green cards, Raza said. This is really important for the children that come on H4, because if they don't have a green card approved by the age of 21, then they aren't eligible for residency and will have to leave, she said.

"It's a lot like the situation Dreamers are put in, because they live their whole lives here and they don't know what is going to happen," she said.

The United States is a scarier place for Muslims now than it was after the Sept. 11 attacks, she said.

"Let's call it what it is, a Muslim ban, not a travel ban. I'm sorry I am really passionate about this; actually, I'm really not sorry," Raza said, tearing up, as the audience applauded. "The reason I am crying right now is because I am thinking of all the Syrian children that were gassed to death and did not have the opportunity to come here; and my family in Pakistan and if that would have happened to them, I would be broken.

"You need to have the same empathy as a candidate. You need to know what is going on."

The contribution of immigrants in the United States and Arkansas was also a focus of Saturday's conversations.

"Immigrants do their share," Esquival said to the audience. "You are seeing immigrants, undocumented too, being business owners, taxpayers, neighbors. They are such an important part of Arkansas. I think that is important to take into account. They are the ones that make this are diverse and into a thriving community."

In Arkansas, immigrants make up about 5 percent of the population. They paid $614.4 million in federal taxes and $291.1 million in state and local taxes in 2014, according to The Contributions of New Americans in Arkansas August 2016 report.

Immigrant business owners made up 6.5 percent of all self-employed Arkansans and generated over $162 million in business income in 2015, according to the American Immigration Council.

Undocumented immigrants in Arkansas paid an estimated $62.8 million in state and local taxes in 2014. Their contribution would rise to $77.2 million if they could receive legal status, according to the Pew Research report.

DACA recipients in Arkansas paid an estimated $15.9 million in state and local taxes in 2016, according to the Institution of Taxation and Economic Policy.

Speakers also discussed many issues that affect immigrant close to home, such as poultry workers' rights.

Poultry production workers develop life-long injuries, such as carpal tunnel syndrome, because of the fast, repetitive motions they do every day. They then find it difficult to receive compensation as they do not have access to many health care services, said Humberto Marquez, speaker and activist.

Because of how fast the line is moving, they are often not allowed to use the restroom, Marquez said. This is a humanitarian issue, but also who wants to eat the chicken from a place where workers are peeing on themselves, he said.

"We shouldn't put profits above people," Marquez said. "We don't need your charity. We need your solidarity."

Organizer Irvin Camacho said sometimes candidates do not know how to reach out to and get connected to immigrant communities. He ran in 2016 for Arkansas House of Representatives, in District 89.

"I've realized it's not that people don't care; they just don't know how to create that bridge," Camacho said speaking to the candidates present Saturday. "No one has excuses anymore. You can show up to one event and learn from different communities. Then, it is your responsibility to continue the conversation. It will your responsibility to make sure you are outspoken about issues that affect many communities present today."

Most if not all candidates present signed a #ARPledgeToProtect that stated they would "be an ally and choose to see immigration for the humanitarian issue it is."

Robb Ryerse is an independent Republican running for representative for the state's third congressional district. He has been advocating for immigration reform, but he realized Saturday he has been unintentionally discriminatory, he said.

"So often we talk about statistics and we forget there are real people and stories behind these numbers. It's a human rights issue," Ryerse said. "For me, today, I realized from the pledge I was signing that all my campaign material is in English. I need to put my money where me mouth is, so to speak. That's going to be priority over the next couple of weeks."

Arkansas Senator Joyce Elliott was the last speaker at the event. She has fought for more than a decade to pass legislation that would help immigrants get in-state tuition in Arkansas instead of paying out-of-country rates, which can be three times more. She told the audience not to wait until an issue affects them personally to act.

"The real power of being in the United States lies in folks who decided to take that dreaded trip here. Who say, 'I am choosing America,'" she said. "There have to be things that affect other people more than they affect you for which you have an obligation to stand. Don't be one of those people who have to wait for something to happen to you before you say, 'I get it.' That's not the American way. It's OK not to know everything. It's not OK to do nothing." 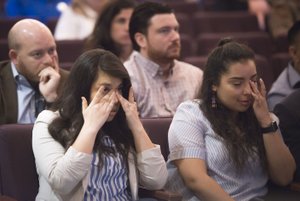 NWA Democrat-Gazette/CHARLIE KAIJO Youth activists Mayra Esquivel (from left) and Michel Rangel tear up Saturday while listening to a friend share a story about racism she experienced during an immigration conversation forum at The Jones Center in Springdale. Immigrant Youth of Arkansas hosted an immigration conversation with candidates running for office in Arkansas. Topics included DACA, the Dream Act, the Immigration and Nationality Act Section 287(g) and Marshallese immigration issues. “Today is a platform we have created to be able to inform Arkansas candidates running for office about the realities behind the struggles and issues that the immigrant community faces nationwide and in Arkansas,” said youth activist Mayra Esquivel. “We’re wanting to debunk and misconceptions people have about immigrants and put a real face to these issues.”