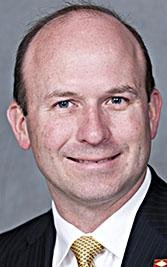 Neal was the first witness in the federal corruption trial of Woods and consultant Randell G. Shelton.

Also today, U.S. District Judge Timothy Brooks ruled statements made by Woods during a time when he was cooperating with federal investigators cannot be used to impeach Neal’s testimony, for now.

Woods cooperated with federal investigators from November 2015 through early 2016, according to a March 2 ruling from Brooks. In a discussion held away from jurors, Shelton’s attorneys asked to use some of his statements in their cross-examination of Neal today. Woods’ attorneys objected.

Woods of Springdale; Oren Paris III, former president of Ecclesia College in Springdale; and Shelton, formerly of Alma, were indicted in March 2017. Paris pleaded guilty April 4 to one count of conspiracy and will testify for the government.

Neal of Springdale pleaded guilty Jan. 4, 2017, to one count of conspiracy. He admitted receiving two kickbacks, one in 2013 and one in 2014, totaling $38,000 in exchange for directing grants to two nonprofit groups. His sentence is pending.

Woods is accused of taking kickbacks from Paris in return for directing $550,000 in Improvement Fund grants to Ecclesia, all in 2013 or 2014. Paris reportedly disguised the kickbacks as consulting fees paid to Shelton’s company, Paradigm Strategic Consulting, Assistant U.S. Attorney Kenneth Elser said in his opening statement Tuesday afternoon. Shelton then passed money along, the government contends.

Neal testified this morning that Shelton delivered $18,000 in $100 bills stuffed in two Arvest bank envelopes in December 2014 behind his family’s Springdale restaurant, Neal’s Cafe. The money was a kickback for directing $50,000 in Improvement Fund grants to Ecclesia, Neal said.

“It’s like a slush fund. It’s what it is,” Neal said of the grants, adding they also helped win votes and garner media publicity.

The fund consists of state tax money left unallocated at the end of each fiscal year and interest earned on state deposits. Each legislator was given a share of the fund to be directed to a nonprofit group or government entity. The state Supreme Court declared this method of distribution unconstitutional in a ruling Oct. 5.

A broad investigation into Improvement Fund grants is ongoing, Brooks noted in a ruling last month.

Shelly Koehler of Fayetteville, one of Shelton’s attorneys, said Tuesday Shelton has a long history of successful enterprises including fundraising that extends to before he entered college. He was helping Ecclesia pursue an $18 million expansion plan, she said.

Neal said he became involved in the kickbacks because he was having financial trouble and asked Woods how he made money. Neal said he asked Woods because he observed Woods had a nicely furnished Little Rock apartment with sports memorabilia such as a baseball bat signed by Pete Rose and a signed photograph of Michael Jordan.

Woods said he had a deal worked out and came back to him a few days later with the kickback plan in which the two would receive 20 percent of any grant money steered to Ecclesia and another nonprofit, AmeriWorks, Neal said.

Defense attorneys noted today that Neal had other means of financial support, including $6,000 in legislative per diem and other reimbursements he collected the same month he said he accepted the money from Shelton.

Neal’s guilty plea included his taking kickbacks along with Woods for $400,000 in state grants to AmeriWorks. Neal said he received $20,000 delivered by Woods for steering $125,000 to AmeriWorks. Grant records show Woods directed $275,000 to the company.

AmeriWorks was incorporated by lobbyist Russell “Rusty” Cranford a day before it received the grants. The $400,000 from the 2013 grant was returned Aug. 14, 2014, after federal investigators questioned the company’s founder about the grants, according to Woods’ indictment.

Woods and Neal, both Republicans, then cooperated to use part of the refunded $400,000 to steer another $200,000 to Ecclesia in return for another kickback, the indictment says.

Cranford, 56, is set for trial June 11 in federal court in Springfield, Mo., on one count of conspiracy and eight counts of accepting bribes in an unrelated indictment.

Neal also testified he put in his personal account a $1,000 campaign donation from Cranford for his 2012 state House race. Neal said Woods told him to make sure his campaign showed a deficit at the end of the year so Cranford could legally write a check to the campaign fund.

Woods grew up in Springdale and graduated from the University of Arkansas with a degree in marketing in 2002. He was working as a loan officer at a bank when first elected to the state House in 2006. At the time, he was also a member of the rock band A Good Fight.

He served three terms in the state House before defeating incumbent Sen. Bill Pritchard, R-Elkins, in 2012. He did not run for re-election in 2016, but collected the largest amount of per diem, mileage and other expense payments among senators that year at $33,692.

Woods also was a partner in a consulting business, Woods Enterprises, beginning in 2007, according to his statement of financial interest filed with the Arkansas Secretary of State. Woods listed income of more than $12,500 from both A Good Fight and the consulting business each year until 2014, when his expense payments from the state and wife’s salary were the only sources of income of more than $12,500, according to his filings.

He incorporated another business, Titan Consulting, in 2016 and listed income from the business of more than $12,500 that year.