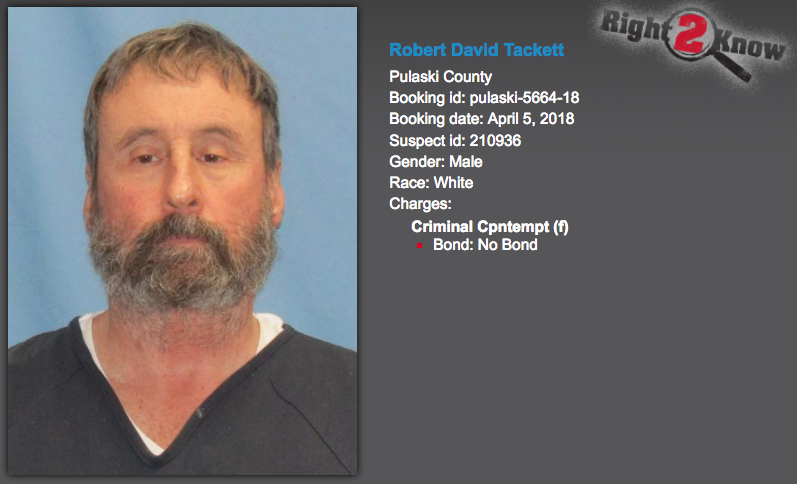 A suspect in an attempted arson of a Maumelle home was arrested Thursday morning without incident while on his pontoon boat on Lake Ouachita by the Montgomery County sheriff's office, with assistance from Arkansas State Police and Arkansas Game and Fish Commission officers.

Police had issued an felony warrant Tuesday for Robert David Tackett, 63, of Maumelle, on charges of criminal intent to commit arson of a Creek Valley Lane residence he co-owned in Maumelle, said Capt. Jim Hansard of the Maumelle Police Department.

Hansard said Thursday that Maumelle police had notified Arkansas Game and Fish officials while Tackett was being sought because Tackett was believed to be pulling a trailer carrying a pontoon boat.

"We got a call [Wednesday] that they had located the truck and boat trailer at Lake Ouachita with no boat," Hansard said. "They were pretty convinced he was out on that lake somewhere."

Tackett's estranged wife and business co-owner, Roxane Tackett, called Maumelle police from her residence Monday to report that her husband had "destroyed the business" while it was closed, Hansard said. All chairs and booths had been sliced open, baking equipment bent and broken, and glass fixtures and cases were broken, according to a Maumelle police report.

An officer accompanied Roxane Tackett to 105 Creek Valley Lane, also owned by the Tacketts, which was listed in the police report as Robert Tackett's residence. The front-door lock had been changed, Hansard said, but there was no visible damage.

On Tuesday morning, Roxane Tackett again contacted police and said she had obtained a new key and could smell gasoline from the front door of the Creek Valley Lane residence. Once the responding officer arrived and detected a gasoline smell coming from inside the house, the officer notified the Maumelle Fire Department.

"They go in and find four separate places in the house rigged with gasoline and timers, in order to detonate the house, basically," Hansard said. "According to her [Roxane Tackett], the lone suspect is her soon-to-be ex-husband, Robert Tackett."

Maumelle police notified the Arkansas State Police and the Bureau of Alcohol, Tobacco, Firearms and Explosives to assist in the investigation. Neighbors were evacuated until Tuesday evening because of the possibility of other detonation devices on the property, the police report said.

MorningSide Bagels announced on its website this week that the business closed as of Monday "for personal reasons," and would seek a new owner.