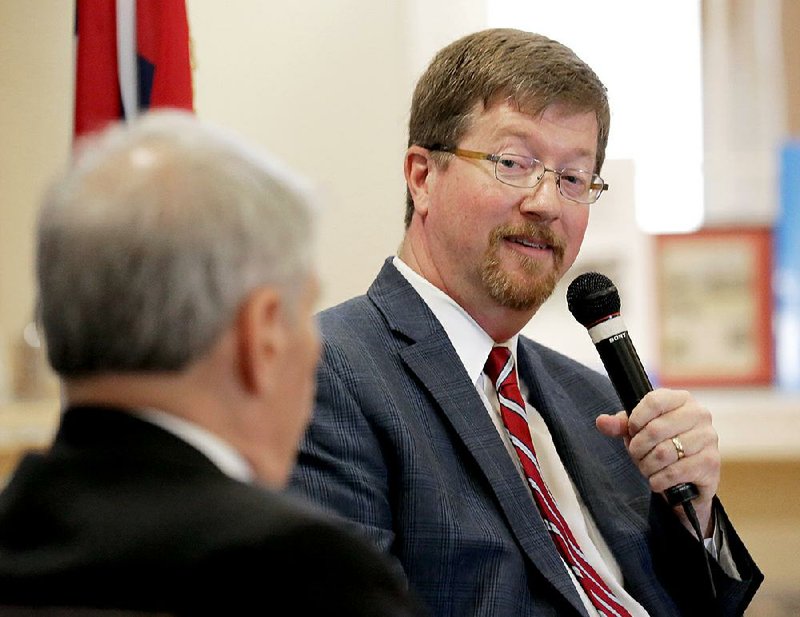 Arkansas Education Commissioner Johnny Key on Wednesday publicly held out the possibility for 2018 school board elections in the Little Rock School District, which has been operating under state control without an elected school board since January 2015.

Key said changes in state law earlier this year require all of the state's school districts to hold annual school board elections in either May or November of any year, to coincide with dates for preferential primaries in May or the general election in November.

"I don't know that we would be ready by May," Key said about a Little Rock district election in response to questions from Skip Rutherford, dean of the University of Arkansas' Clinton School of Public Service, at a noon-hour interview program at the school.

"I would think that November could be an early window, but it depends on what we find and what the state Board [of Education] determines from the study that we do," Key said.

In any case, Key went on to say, he does not see the state management of the Little Rock district stretching out for the entire five years -- until 2020 -- as is permitted by law for keeping a school district under state governance before choosing to either return it to a local board or merge it into one or more other districts.

"So, it is probably somewhere in that year four is what we would be looking at, year three or year four," Key said.

The Little Rock district's School Board was removed and the superintendent placed under the commissioner's direction more than two years ago when six of the district's 48 schools were labeled as academically distressed. That was because fewer than half of the six schools' students scored at proficient levels on state math and literacy exams over three years.

Three of the six schools have since been cleared of the label, but the remaining three have not, preventing the Education Department staff from recommending that the state Education Board vote to reinstate local governance.

But now, Act 930 of 2017 has expanded the measures for releasing a district from state control beyond just test results, Key said Wednesday.

The Education Department staff is currently doing those kinds of system reviews -- identifying gaps and necessary supports -- in the Little Rock district and in the Pine Bluff-based Dollarway district, which is the only other district now under state control and labeled under Act 930 as being in "Level 5-Intensive Support." The state agency staff is expected to recommend to the state Board of Education at its November meeting "transitional support plans" to address deficiencies in the districts during the remainder of the school year.

Rutherford pressed and received from Key assurances that if a school board election is set for May, that decision would be made early enough -- in December or January -- to give people necessary time to decide whether to run for a board seat.

During the hourlong interview program before about 100 people in the Clinton School's Sturgis Hall, Rutherford also asked Key about open-enrollment charter schools, statewide pre-kindergarten education, chronic absenteeism among students, and the national epidemic of opioid and prescription drug abuse.

"When it comes to Johnny Key and charter schools, the word is that you have never met a charter school in Little Rock that you didn't like," Rutherford told Key at one point to some laughter in the audience, members of which included past and present state Board of Education members, a former director and assistant director of the Department of Education, Education Department staff members, teacher organization leaders, a Little Rock School District attorney, community activists and Clinton School students.

Rutherford, who was a Little Rock School Board member from 1987-91, argued to Key that there has been no difference between a locally elected school board and the state education commissioner/state Board of Education when it comes to "micromanaging" the Little Rock superintendents since the state takeover. He cited Superintendent Mike Poore's request earlier this month -- not granted -- that there be a pause on approving new charter schools.

Key said state education boards are in the role of applying state policy that can be contrary to the desires of local districts. State officials have to seek the balance between what is done for districts versus what is done for students and their families, he said.

"We understand that you want a delay, but on the other hand there are students and families who have said, 'We have been waiting for opportunities for a different venue for our education and they have been blocked to us,'" Key said.

"Somebody is going to be upset when the decision falls on the other side of the balance," he said, adding that state Education Board members have voiced those pains or conflicts in their deliberations.

Rutherford told Key that he believes there is merit in some charter schools, specifically mentioning eStem Charter Schools in Little Rock and the Future School in Fort Smith. He also said there will be benefits to city neighborhoods in revitalizing the old Mitchell and Garland elementary schools for charter schools.

"Yes," Key responded, and cited the Education Department staff's recommendation earlier this year that the Covenant Keepers School charter be revoked. That decision by the agency's Charter Authorizing Panel was reversed by the state Board of Education.

"To say I never met a charter school I didn't like obviously confers to me some authority I really don't have," Key said, "because I don't statutorily or in practice dictate" which schools will make it.

The event Wednesday did not include questions from the audience, which angered Anika Whitfield, leader of the Save Our Schools grass-roots organization that was started in opposition to the Little Rock district move last winter to close three campuses and reconfigure another at the end of the 2016-17 school year.

District leaders said at the time that the changes were necessary -- despite objections from neighborhood members and others -- to cut expenses and operate more efficiently at a time of declining state desegregation and other revenue.

In an email later Wednesday to Rutherford that she shared with others, including the Arkansas Democrat-Gazette, Whitfield said, "It is very disappointing and disrespectful for you to have hosted a public conversation and invited an audience without allowing time and space for any questions." She also said she was shocked that he "allowed statements to be made unchecked and unchallenged as if both you and Mr. Key speak only factually, without human error. That is not a reality."

Had she been able to speak, she said, she would have talked about the closing of the schools this year and how former district schools are to be used without consulting with neighbors.

"When will people who are white and privileged take off their fearful blinders and begin to see the continual disease that you permeate through American culture because of the need to hold on to something that was never yours to have in the first place?" Whitfield, who is black, wrote to Rutherford, who is white.

Rutherford said in response to Whitfield that the Clinton School program speakers sometimes take questions and sometimes don't, depending upon available time.

"In this case today," Rutherford said in an email, "I prepared a series of questions for [Key] that I thought covered a broad spectrum of local and state education issues. When I realized that we were at 1 p.m., and I saw some people getting up, I realized that it was time to end the program. I did conclude by saying 'Please come up and ask him any questions that you have.' Many people did so." 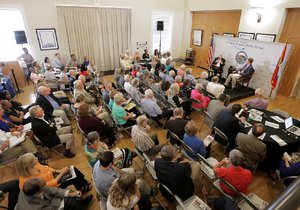 Photo by John Sykes Jr.
About 100 people gathered Wednesday at the Clinton School of Public Service in downtown Little Rock to hear the school’s dean, Skip Rutherford, interview state Education Commissioner Johnny Key about the Little Rock School District. No questions were taken from the audience.