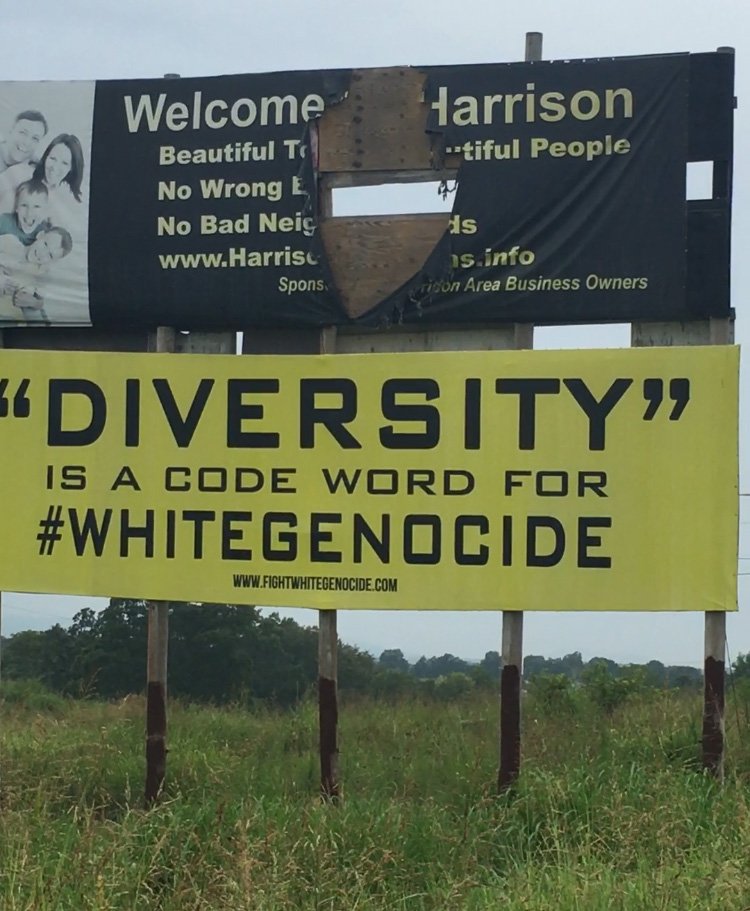 Two billboards containing messages that some people found offensive were removed last week in Harrison. The lessee had neglected to make a $20 permit renewal payment that’s due to the state every other year.

When she offered two billboards for lease on her family farm near Harrison three years ago, Carrie Myers said she had no idea they would be emblazoned with racially tinged messages.

One of the signs along U.S. 65 read: "Welcome to Harrison. Beautiful town. Beautiful people. No wrong exits. No bad neighborhoods."

Underneath it, a second bright yellow sign with black lettering read: "Diversity is a code word for white genocide."

Myers, who is white and adopted a Hispanic daughter 12 years ago, said she thought there was nothing she could do because the billboard lessee would have a right to free speech under the First Amendment to the U.S. Constitution. She had signed a five-year lease.

But after two Harrison lawyers got involved, the billboards came down Wednesday.

The lessee had neglected to pay a $20 permit renewal fee that is due every two years to the Arkansas Department of Transportation, said Kelsey Bardwell, who credited her law partner Catherine Golden for catching the violation.

The Transportation Department sent a letter to the lessee, Brian Bryant of Harrison, on Feb. 1, 2016, saying it was his "final notice."

"Signs with expired permits are illegal and their removal is required," according to a letter signed by Jeff Ingram, head of the Transportation Department's beautification section.

But the billboards remained up for another year and a half while Bryant paid $75 a month to Myers, even though the wrap on the top billboard was badly torn.

"We kept thinking surely it will fall," Myers said. "I think we even prayed some about that. ... That's just not who Harrison is anymore. The signs are offensive to a lot of people I know, including me and my family."

Bardwell said Bryant hired Harrison Sign Co. to remove the printed wraps that were attached to the wooden billboard frames on Myers' property.

Myers credited Golden and Bardwell for helping her and Harrison, which has had similar billboards for years.

"They came to my rescue," said Myers, who has a half dozen billboards around town.

"I did not think as a landlord I had a right to censor their signs regardless of how despicable I thought they were, because of free speech," she said. "My daughter has black friends. I have black friends. I don't even think about your color."

Bardwell said she is encouraging Harrison landowners to put a clause in their contracts saying they get to approve any billboard wrap before it goes up on their property.

"We were able to help her find a way to get them down," Bardwell said. "Landowners have their own free speech rights when it comes to their property."

Bryant didn't return a voice mail left for him Monday at the telephone number on his initial permit application with the Transportation Department.

Thom Robb, leader of the Knights of the Ku Klux Klan, said in an email that he didn't put the billboards up.

"But from what I understand, they are not being 'removed' as such but are being relocated," he wrote.

When asked in an email where the signs would reappear, Robb didn't respond.

Bardwell said a member of Harrison's Community Task Force on Race Relations referred Myers to her law firm, and they did the work pro bono.

Harrison received national media attention in 2013 when a billboard went up in town that read "Anti-Racist is a Code Word for Anti-White."

Bardwell said that billboard is gone, but there is still a billboard on the eastern edge of Harrison advertising "White Pride Radio."

Harrison has been dogged by image problems since race riots in 1905 and 1909 that drove all but one black person out of the city. The problem was exacerbated in the 1980s when Robb moved to rural Boone County and began using a Harrison post office box for the group's mailing address.