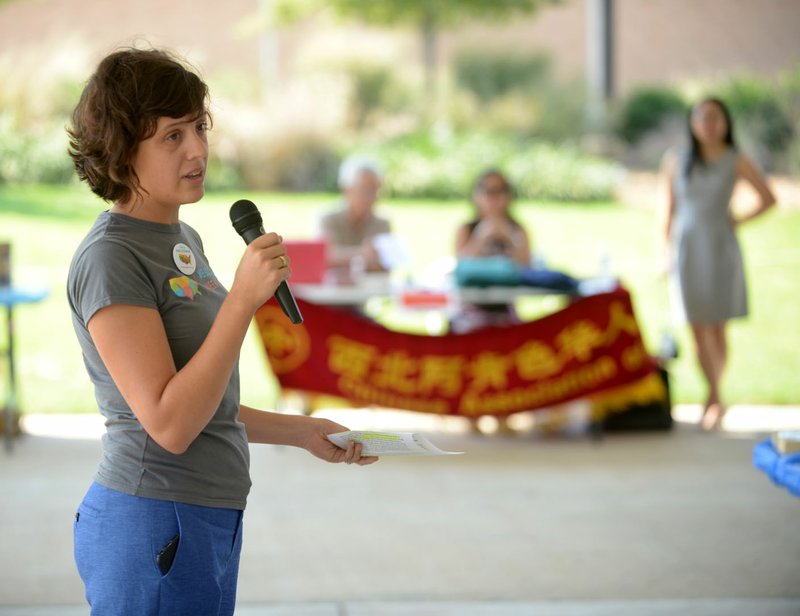 The program allowing thousands of Arkansas teens and young adults to stay in the country may survive despite the president's decision to end it, political scientists and others said last week. 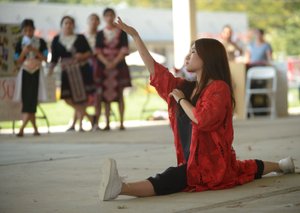 NWA Democrat-Gazette/ANDY SHUPE Cuihua Chen, a student at the University of Arkansas, performs a dance Saturday while representing the Chinese Association of Northwest Arkansas during a local observance of National Welcoming Week hosted by EngageNWA and the Northwest Arkansas Council's WelcomeNWA initiative at Shiloh Square in downtown Springdale. The event featured information about area agencies for people new to Northwest Arkansas as well as performances by regional cultural groups.

The fate of the Obama-era program known as Deferred Action for Childhood Arrivals, often called DACA, is hardly guaranteed. State Republicans -- whose party long opposed the program -- and DACA supporters alike raised concerns about other changes to the immigration system that could come with deferred action's renewal. One such change could be stricter limits to immigrant numbers.

The University of Arkansas School of Law Immigration Clinic will hold a public informational session about changes to the deferred action for childhood arrivals program Monday.

President Donald Trump's administration earlier this month announced the program would stop taking applications and let the two-year work permits for its recipients expire. He said it would be up to Congress to fix the issue.

Deferred action offers two-year, renewable permits for more than 800,000 people who were brought into the country illegally as children, have no serious criminal history and are mostly aged in their teens to mid-30s.

Almost 6,000 people in Arkansas were among the group as of March, with another 2,000 who were eligible but hadn't applied, according to the nonpartisan Migration Policy Institute.

Immigration reform has a troubled history, with no major changes in two decades despite repeated attempts by both major parties. Congress never approved DACA, and Republicans in Arkansas and elsewhere called it an unlawful use of presidential authority.

The push to keep the program through legislation has a couple of advantages over other attempts, said Janine Parry, a political science professor and director of the 18-year-old Arkansas Poll at the University of Arkansas, Fayetteville.

For one, it is a relatively focused, narrow policy that affects a specific group of people with whom members of the public can sympathize even if they oppose illegal immigration, she said. These things can make building support for the policy easier.

Immigration as a general issue, in contrast, is huge and complex. Efforts to change it wholesale often fall victim to the same kind of problem that plagued Republican efforts to change health care this year, when yearslong calls for repealing the Affordable Care Act tripped over policy details and the real-life impact of changing them, Parry said.

"We feel strongly about it, we know little about it, and the details are complicated," she said, which is why successful policy changes can be frustratingly incremental. The deferral program, though, "is a small piece that stands a chance of being addressed even in this environment."

Republican leaders have changed their approach. Trump in his campaign, for instance, called for restricting immigration and said DACA would end immediately when he became president. Last week on Twitter, Trump asked, "Does anybody really want to throw out good, educated and accomplished young people who have jobs, some serving in the military?"

"I see some meaningful changes in the rhetoric on the Republican side, so that does mean something," said Xavier Medina Vidal, professor of Latino Studies and assistant professor of political science at the university. He credited the sympathetic narrative of people who qualify under the program.

"It's not new that the lives of very vulnerable people are being toyed with by, I think, both sides of the aisle," Medina Vidal added, pointing to other proposals that Congress could attach to a more permanent DACA policy.

For example, Sen. Tom Cotton, R-Ark., has said the deferral program must come with limitations to the rest of immigration -- like curtailing the ability of immigrants to sponsor their family members for visas -- to avoid giving an incentive to enter the country illegally. Trump took the same stance on Twitter on Friday.

The Migration Policy Institute doesn't offer DACA estimates on the county level for Arkansas, but Northwest Arkansas is home to around 40 percent of the state's Hispanic people, based on 2016 estimates by the U.S. Census Bureau. DACA recipients include Koreans, Chinese and other nationalities but are overwhelmingly from Mexico and other Spanish-speaking countries, according to the institute.

Based on that proportion, between 2,000 or 3,000 of the state's 6,000 DACA recipients could be going to school or working in the Fayetteville-Springdale-Rogers Metropolitan Statistical Area.

The Immigrant Resource Center in Springdale has seen a surge of people renewing their permits before the Trump administration's Oct. 5 deadline, said Erick Sanchez, the office's manager and a deferral recipient himself.

Zessna Garcia-Rios, 28, said she plans to keep seeking a master's degree in political science at the university and working as a graduate assistant. She hopes to work with nonprofit groups or political campaigns afterward.

She came into the U.S. when she was 3 and renewed her deferral permit in August, which means she should get about two years under the program even if Congress fails to act. The family prepared for deportation by making sure her younger siblings, who are citizens, can contact their extended family back in Durango, Mexico.

"I have no regrets, absolutely none. It changed my life completely," Garcia-Rios said of the program. "Now I get to put my activist cap back on."

Northwest Arkansas' representatives in Congress, all Republicans, haven't said they would oppose DACA outright but have given the program varying degrees of public support.

Sara Lasure, spokeswoman for Sen. John Boozman of Rogers, last week said only that the senator looks forward to Congress's pursuit of "a legislative solution to fix our broken immigration system."

Rep. Steve Womack of Rogers said in a statement earlier this month Congress can find a way to "champion" lawful immigration and bring the "proper relief" to young immigrants who know no other country as home. But his spokeswoman didn't answer questions last week about what proper relief would be, citing Womack's busy schedule.

He's called for pairing the program with the proposed RAISE Act, a bill he co-sponsors. The proposal would eventually cut legal immigration in half, allowing around 500,000 new lawful permanent residents instead of around 1 million, his office has said.

It would eliminate adult citizens' and legal residents' ability to sponsor their adult parents, adult siblings and adult children who wish to join them. They still would be able to sponsor spouses and minor children. The bill would also put in place a merit-based system for awarding visas based on immigrants' skills and education, for example.

"Otherwise, we're going to be back here in three or four years talking about what to do with the next 200,000 young people who were brought into this country illegally from 2018 to 2023," Cotton said.

Some supporters of tighter immigration have denounced any kind of deal extending DACA's protections, seeing it as caving on the law and encouraging more illegal border crossings.

"The parents who made the difficult choice to violate the law also bear considerable fault for the legal peril their children are in today," Benjamin Dierker, a legal intern at the Center for Immigration Studies, which supports tightening immigration overall, wrote in an online post Sept. 10. "Ending the incentive for more illegal and dangerous immigration is the only compassionate option currently on the table."

Arkansans have taken a variety of positions. Republicans like Gov. Asa Hutchinson have said they support a combination of reform and tighter border security, something Democratic leaders in Congress have signaled they'd be willing to do. Sanchez and other local activists have called for a "clean" DACA bill with no add-ons.

"I hope they can work something out that moves the ball down the field" toward more holistic reform that makes the border more secure and improves the immigration system overall, said State Rep. Charlie Collins, R-Fayetteville. He said he supported Cotton's merit-based idea and thought the bill could be a starting point.

As for deporting DACA recipients, "I certainly would not think that's a good idea."

Cotton has said his primary motivation in his bill is to protect Americans with a high school diploma or less. They often compete directly with immigrants for low-skill jobs, which holds down their pay, he has said, though he acknowledged other economic forces are also to blame.

Census estimates support his contention people with low levels of education have seen their wages rise more slowly than others' in recent years. People with at least a college degree in Northwest Arkansas saw their earnings go up by around 30 percent from 2005 to 2015 without taking inflation into account, compared to a bump of around 20 percent for those with a diploma or less.

Construction, manufacturing and other businesses in Arkansas saved $147 million in wages a year with immigrant labor, supporting another part of Cotton's argument, a 2013 report by Little Rock's Winthrop Rockefeller Foundation found.

Several employers and economic experts have said the bigger picture rebuts Cotton's argument. Years of study have found many immigrants are working in agricultural or production jobs citizens simply won't take, said Mervin Jebaraj, interim director of the university's Center for Business and Economic Research. Even if that weren't the case, immigrants' spending, taxes and savings feed into even more jobs than they hold, he said.

"There's plenty of jobs going around for people with the right qualifications," he said, pointing to local construction firms that say they can't find enough skilled people to hire. Taking away part of the labor force by cutting immigration can backfire, he added, by prompting companies to move to where workers are available or to automate.

An analysis from the University of Pennsylvania's Wharton School projected Cotton's bill would raise average wages just 0.23 percent in the first decade, enough to bump a $10 hourly wage to $10.02. The country would also have a million fewer jobs because of the smaller number of workers, shoppers and savers, the economists there said.

Reports from Moody's Analytics and the nonpartisan Congressional Budget Office in the past few years have projected similar effects.

Cotton's office has criticized the Pennsylvania report as incomplete and based on an untested economic model.

Kimberly Burham, special projects director for the Pennsylvania group, said the model they used was developed over years and uses detailed Census and economic data. She noted the model projected keeping the RAISE Act's emphasis on more skilled immigrants while leaving the number of immigrants alone was projected to slightly boost the economy.

Jebaraj said workforce training programs that begin during school and expose students to different trades, such as welding or health care, can also improve the fortunes of people with diplomas. Several chambers of commerce and schools in the area continue to build and expand such programs.

"Northwest Arkansas has been a leader in this," Jebaraj said.