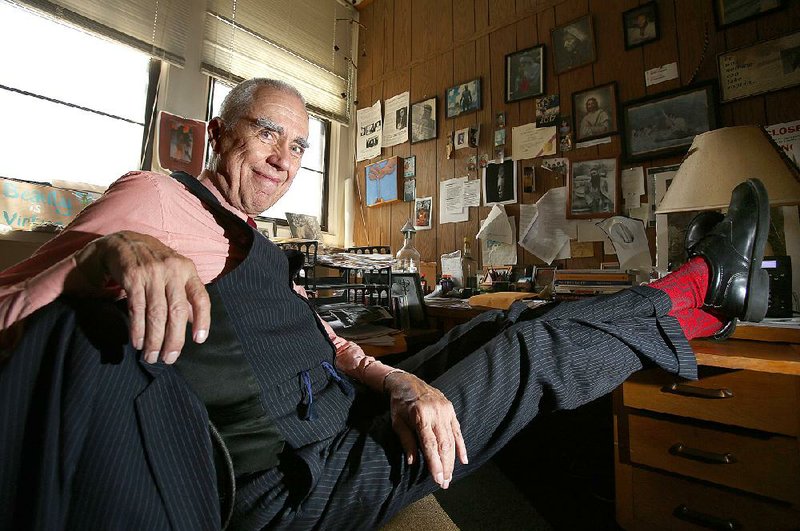 Robert “Red Hawk” Moore sits in his office at the University of Arkansas at Monticello.

MONTICELLO -- Robert Moore was 18 years old, a freshman at Illinois State University in Normal, Ill., when he wrote his first poem.

Given the choice for an English composition assignment to write an essay, a short story or a poem, Moore went with the poem, figuring it would be easier.

Titled "Black Is the Color of Sorrow," it was about his black friends back home in Decatur, Ill., and their struggles.

Moore had problems as well, growing up in the 1950s in a home with a violent, alcoholic father and a mother who drank herself into unconsciousness each night. He and his older sister, Joy, were more concerned with survival and avoiding their father's rage than the typical childhood preoccupations.

After writing his poem, he left his dorm room for a while. When he came back, his roommate was there.

"I read that poem on your desk," the roommate said. "You can't turn that in. It's not your work. You must have copied it."

Moore, who is also known as Red Hawk and is now 74, was thrilled.

"It was the best compliment anybody could have ever given me," he says. "At that moment, I became a poet. He gave me the highest praise he could have given me. I got recognition and honor, which I'd longed for since my childhood. I'd had no love, I was ashamed of myself, but here is a genuine compliment. From that point on, I began to try to write poetry."

He got an A for "Black Is the Color of Sorrow."

And so, his soul burning with poetry's fire, he wrote another.

It was the beginning of a lifelong search for truth and love through verse.

"My poetry was the first thing to show me the way to God."

WISDOM OF THE TAO

Moore sits in his lovingly cluttered second-floor office in the Memorial Classroom Building at the University of Arkansas at Monticello, where he has taught remedial English for the past 20 years.

He is tall, thin and quick with a smile and laugh. His bushy eyebrows look ready to take flight and he is dressed in a dark, three-piece,

pinstripe suit (minus the jacket), a pink button-down shirt and burgundy tie and socks.

"He always wears a suit," says Mark Spencer, dean of UAM's School of Arts and Humanities. "He believes it's important to model success for students. But sometimes, with the suit, he wears a bulbous red clown nose."

There is no clown nose on this August afternoon, as Moore talks about his latest volume of poems, Return to the Mother: A Lover's Handbook.

Subtitled Poems of Self Remembering and Self Observation Inspired by Lao Tsu's Tao Te Ching, the book's 94 poems are each 16 lines and take their titles from the text of the Tao Te Ching, the Taoist work credited to Lao Tsu, from the 6th century B.C.

"Lao Tsu was a great spiritual master, like Jesus," Moore says. "The Tao Te Ching has been one of my constant companions and friends for 50 years."

Return to the Mother: A Lover's Handbook is his eighth book of poetry, all published under the name Red Hawk, and is the final installment of a trilogy that began with the nonfiction works Self Observation: The Awakening of Conscience: An Owner's Manual from 2009 and 2015's Self Remembering: The Path to Non-Judgmental Love: A Practitioner's Manual.

Return to the Mother is a distillation of the earlier books, Moore says.

"The aim is to be more present to my life and to the moment -- which is my life unfolding in front of me -- so self-remembering/self-observation is 'the practice of presence.' When I am present in the now-of-the-body I am open and available for love to find and use me."

Hohm Press of Prescott, Ariz., has published five of Moore's books, including the trilogy.

"Red Hawk really crafts a poem. He gets in there really deep," says Hohm Press publisher and general manager Dasya Zuccarello. "He is able to communicate what's going on with himself, which reflects a lot of what's going on for other people, at a very sensitive level. It's very moving and it really communicates."

Some of his books have been translated into Chinese and Romanian.

"This is one of my poems," Moore says, laughing while holding open a copy of an earlier work published in China. "What does it say? I have no idea!"

Moore, who was the 1991-1992 Hodder Fellow in the Humanities at Princeton University and whose work has appeared in The Atlantic, The Kenyon Review, Poetry and other publications, says the inspiration for the new poems struck while traveling with his wife, Chandrika, to North Carolina.

They stopped at a coffee shop and bookstore in Abingdon, Va., where Moore thumbed through a copy of Wayne Dyer's Change Your Thoughts, Change Your Life: Living the Wisdom of the Tao, which took sundry translations of the Tao Te Ching and followed with commentary.

"I took out my pen and these lines started suggesting poem titles," he says. "So I began writing down the lines as poem titles. By the time I'd covered both sheets of paper, I decided I'd better just buy this book."

When he and Chandrika arrived at the cabin where they were staying in Ashe County, Moore continued writing.

"For seven days, Lao Tsu spoke to me and I began to write this book," he says. "The first poem was 16 lines. Every one after that, 16 lines. I realized after the second one that I was being given a form here. I'll blame Lao Tsu. This book is sourced by Lao Tsu. I just took notes and tried to be faithful and present in my body so I didn't interfere with the transmission."

The result is what Moore calls a dialogue, a call-and-response with the Chinese philosopher, and is in part a celebration of the feminine side of humanity and the universe.

"He talks about the mother over and over," Moore says. "Who is this mother? It's the Earth, of course. More than that, he's speaking of the divine as feminine, giving birth to the world, to the universe."

To augment his poems, Return to the Mother: A Lover's Handbook contains images by six female artists based on the theme "return to the mother."

"I'm humbled and honored," he begins, pausing as his emotions threaten to overwhelm him. "It's a privilege for me that these women have been willing to contribute something so beautiful."

Moore's poetry, which he writes longhand, is straightforward, devoid of fussiness or pretension; he handles his words and lines with thoughtful economy. It's an approach influenced by William Carlos Williams, Shakespeare, John Keats, John Milton, Charles Bukowski, William Wantling and Robert Frost.

"Poetry, when it's at its best, is coming straight from the heart and it's love," Moore says. "If it's not comprehensible, which is what I hate about so much modern poetry, it makes me feel stupid. It's not coming from the heart because love is clear. Love is simple. Love is plain. My poetry is plainspoken, man, it's not fancy."

"The philosophic depth" of his work is what makes Moore's poems unique, UAM's Spencer says. "He gives readers what the greatest of artists give: timeless, universal truth."

In the '60s, Moore was being published in underground poetry magazines and by 1968 a chapbook of his verse was published. He winces at the memory.

"Nobody's ever seen it," he says. "Nobody will ever see it. It's amateurish. I wanted to get published so bad, but now this book was out and I realized I'm no good, just a fool. Ignorant."

The experience was a revelation.

"Anybody can get published," he says. "That's not where it's at, man. It took 15 years before I would allow another book to be published. When I put it in print, it had better be the best I can possibly do and it had better be something that I'm willing to die for."

The early '70s were a rough period. Moore went through a painful divorce in 1974 that found him separated from his two daughters for a time. He lost his job teaching at the University of Arkansas at Little Rock and spent the next 18 years outside of academia, working at Publisher's Bookstore in Little Rock for a while. He also taught driver's education and health classes in the Job Corps program in Little Rock.

"That was hard-core teaching," he says.

He spent two years on an Oregon ashram run by Indian guru Osho, where he met Chandrika, and also became interested in the teachings of George Ivanovich Gurdjieff, the early 20th-century Armenian mystic and teacher of esoteric Christianity (Moore and his wife attend regular meetings with a Gurdjieff group in Little Rock). He later became a follower of spiritual teacher and author Lee Lozowick.

In 1981, during a sojourn to the Buffalo River in the middle of an ice storm and at the end of a four day fast, he spied a pair of red-tailed hawks soaring over a mountaintop toward the rising sun. From that vision he took what he calls his Earth name, Red Hawk.

His second book, Journey of the Medicine Man, published under his new name, was released by Little Rock publisher August House in 1983.

He and Chandrika, who have been married for 32 years, operated The Vegetable Garden, a Little Rock vegetarian restaurant on Kavanaugh Boulevard from 1992 to 1996.

"I never worked so hard for so long for so little in my life," he laughs.

In 1997, Moore was hired at UAM (a life changing event immortalized in the poem "The Impossible Elegance of Power" from The Art of Dying).

"This is where I was meant to be," says Moore, who has three grandsons. (Return to the Mother: A Lover's Handbook is dedicated, among others, to them, his daughters and Chandrika.)

Along with his Earth name, Moore adopted a hand-drawn symbol of two hawks flying toward the sun, one with flapping wings and one following behind. They represent the need for healthy, loving relationships. 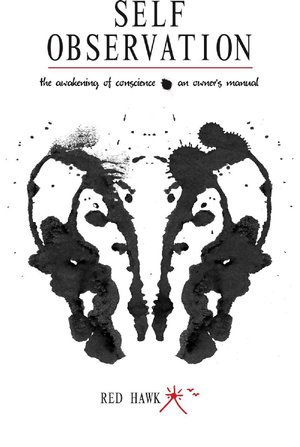 Book cover for Red Hawk's "Self Observation: The Awakening of Conscience: An Owner’s Manual" 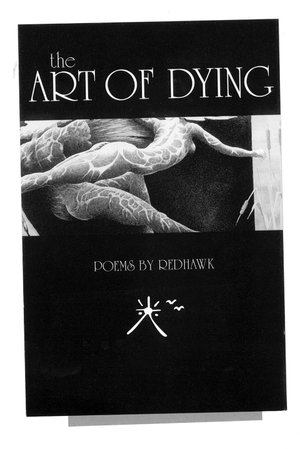 Book cover for Red Hawk's "The Art of Dying" 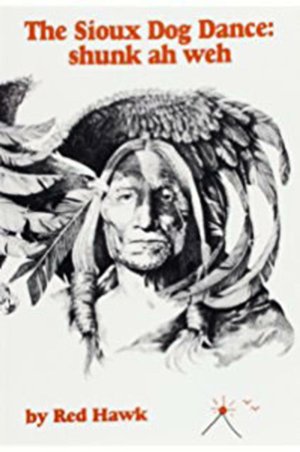 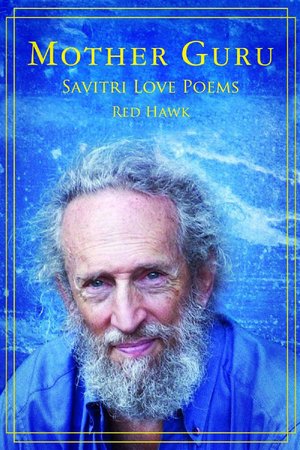