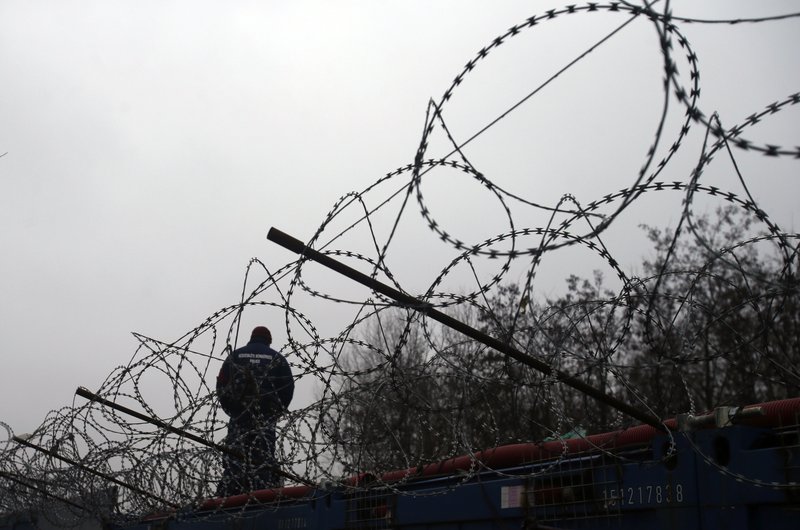 FILE - In this file photo dated Wednesday, Feb. 8, 2017, a Hungarian police officer stands guard at Serbia's border with Hungary near a makeshift camp for migrants in Horgos, Serbia. The European Court of Justice on Wednesday Sept.6, 2017, rejected efforts by Hungary and Slovakia to stay out of a European Union scheme to relocate refugees. (AP Photo/Darko Vojinovic, FILE)

BUDAPEST, Hungary -- The European Union's top court on Wednesday rejected legal action by Hungary and Slovakia to avoid accepting refugees under an EU plan, a decision seen as a victory for countries bearing the greatest burden of Europe's migrant wave.

In a long-awaited ruling, the European Court of Justice said it had "dismissed in its entirety the actions brought by Slovakia and Hungary."

Hungary branded the ruling "outrageous and irresponsible," while Slovakia said it would accept the verdict even if it still opposes legally binding EU refugee quotas.

Human-rights group Amnesty International welcomed the ruling, saying Hungary and Slovakia had been trying to turn their countries into "refugee-free zones."

Greece and Italy have been on the front line of the torrent of migrants and refugees flooding into Europe in the past few years, as hundreds of thousands of people from war zones such as Syria and Iraq or job-seekers mostly from Africa have arrived on their shores.

EU countries agreed in September 2015 to relocate 160,000 refugees from Greece and Italy over two years, but only about 27,700 people have been moved so far, according to figures released Wednesday. Hungary and Slovakia were seeking to have the legally binding move annulled.

Hungary and Poland have refused to take part altogether, while so far Slovakia has accepted a handful of refugees from Greece.

The refugee-sharing plan was adopted by the EU's "qualified majority" vote -- around two-thirds -- and the European Court of Justice held that this was appropriate, saying the EU "was not required to act unanimously" on this decision.

The court also noted that the small number of relocations so far is due to a series of factors that the EU could not really have foreseen, including "the lack of cooperation on the part of certain member states."

Slovakian Prime Minister Robert Fico said he respected the court decision but that his government still does not like the relocation scheme, which some see as a system of quotas imposed on countries by unelected EU bureaucrats in Brussels.

Fico said the plan was a temporary solution. He said he believes his country doesn't face any sanctions from the EU over its stance. EU officials say countries will still have to share eligible asylum-seekers arriving in Greece and Italy up until Sept. 26.

Despite the court ruling, Polish Prime Minister Beata Szydlo said her country will stick by its refusal to take in refugees.

"This absolutely does not change the position of the Polish government with respect to migration policy," she said.

Welcoming the court verdict, EU Migration Commissioner Dimitris Avramopoulos warned Hungary, the Czech Republic and Poland that they could face legal action if they don't live up to their refugee obligations "in coming weeks."

Slovakia is not included in the legal action as it recently agreed to host a few refugees.

Gabriel said the ruling confirms that the solidarity measure approved by EU leaders is not just in keeping with European values but also adheres fully to European law. He said "solidarity is not a one-way street."

The Hungarian Helsinki Committee, an advocate for asylum-seekers, urged Hungary to give refugees an opportunity to make their case for asylum.

"The lesson of the verdict is that helping people fleeing war and terror is truly a common responsibility for Europe," the group said.

Hungarian Prime Minister Viktor Orban's government has made migrants a key political issue since early 2015 and ahead of the parliamentary election expected in April 2018.

Hungary's position is that only its elected leaders should be able to decide who is allowed into the country. Orban has said the large influx of mainly Muslim immigrants threatens Europe's and Hungary's cultural identity.

In mid-September 2015, Hungary closed off its southern border first with Serbia and later with Croatia with a fence protected by razor wire. The fences have mostly stopped migrants from passing through Hungary on their way to Western Europe but Hungary has also greatly reduced the chances for asylum-seekers to submit applications in the country.

In other news, the EU said the bloc's migrant agreement with Turkey was working well but that more effort was needed to speed asylum applications.

"The EU-Turkey statement continues to work and deliver results," Avramopoulos said, adding that migrant arrivals in Greece from Turkey had dropped 97 percent since the deal began in March 2016.