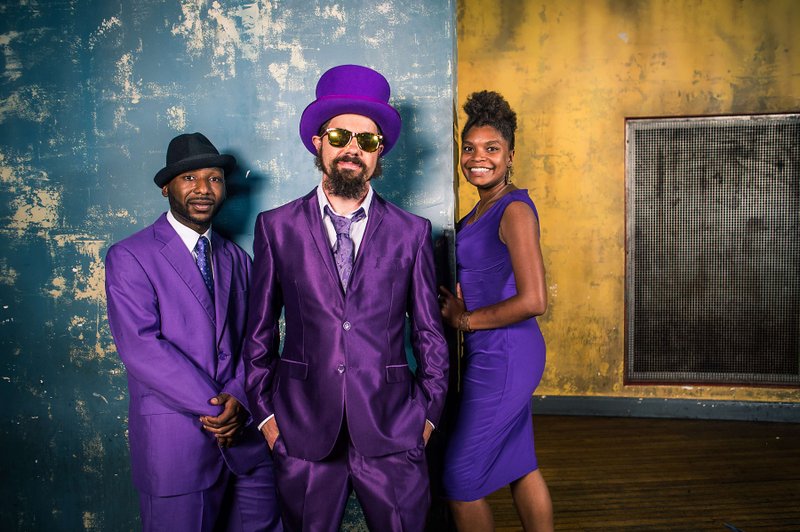 Courtesy Photo Secret Agent 23 Skidoo, center, also known as Joel "Cactus" Sullivan, spent his 20s touring as a rapper. He's still on the road, but his audiences have changed. Now he puts words to beats for kids and families.

Nothing about Joel "Cactus" Sullivan suits the stereotypes about rappers -- well, maybe the purple suit. But if the only rapper you know is Run DMC, Sullivan -- aka Secret Agent 23 Skidoo -- is a surprise on many fronts.

The moniker "Cactus," he says, is based on a cartoon character he drew when he was a teenager in southern Indiana. Ask him about "sharing the stage" with acts like Mos Def and P-Funk, and he'll explain that means "played on the same stage on the same night, not 'touring with.'" And he's quick to say that getting into hip hop for kids was the best decision he ever made, not just for his career but for his family.

Sullivan explains he was touring with a 12-person band -- two drummers, five or six vocalists, "very complex, intellectual, funky, socially conscious hip hop" -- and "it was a blast." But while a 12-person band where everyone had an equal vote "was a lot of things, stable was not one of them." And with a daughter turning 5, he wanted more stability, a chance to pursue "big ideas" he had, and a way to spend more time with her.

"So I taught my daughter to rap, my wife is a fantastic dancer," and for the next five or six years, the family did "everything from playing the Smithsonian to Lollapalooza to India" together. His daughter even came up with her own stage name: MC Fireworks.

That little girl is now 16, and she is no longer the only inspiration for his music, Sullivan says. "It's not about what your kid is doing on the playground but about what kids are doing on playgrounds." But he's stayed with his belief that rap can be "positive and optimistic" and that "the power of music is contagious."

"Every album I experiment with how far can we take it, how deep can these stories get, how much can I make it sound like straight-up '70s soul or reggae or whatever?" he says, adding that "a lot of people underestimate what kids are capable of. They think you have to keep everything very simple, very calm, very happy. But imagine being a kid in this world right now: Is it calm? Is it always happy? Is it simple? Not at all. Whatever successes I've had might mean I'm right about some of this stuff."

Print Headline: 'The Power Of Music Is Contagious'