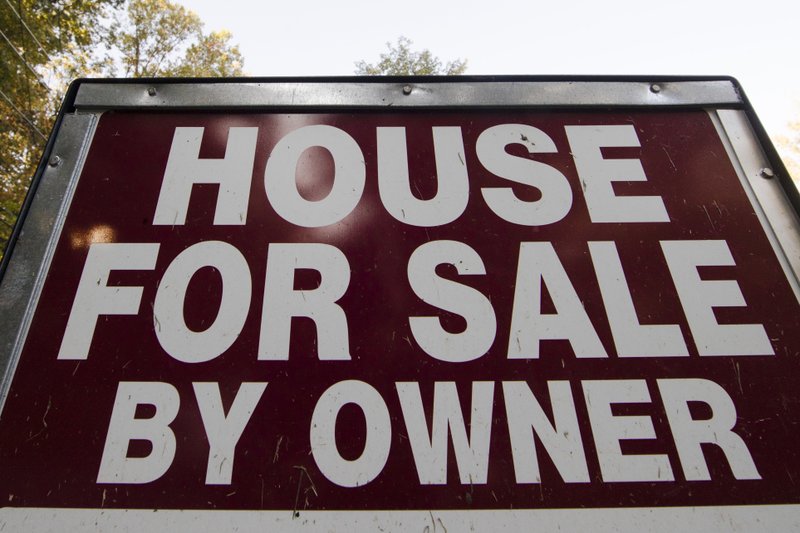 This Tuesday, Oct. 17, 2017, photo shows a "House for Sale by Owner" sign in a yard in Fort Washington, Pa. On Friday, Oct. 20, 2017, the National Association of Realtors reports on sales of existing homes in September.

The number of homes for sale sank 6.4 percent from 12 months ago to 1.9 million homes, the fewest in any September since the National Association of Realtors began tracking the number in 2001.

The Realtors group said Friday that sales of previously owned homes increased 0.7 percent in September to a seasonally adjusted annual rate of 5.39 million. That's the first increase after three months of declines.

Yet sales have fallen 1.5 percent from a year ago, the first year-over-year decline since July 2016. That's because so few homes are for sale, particularly at lower prices. Buyers have bid up housing costs: The median home price rose to $245,100, up 4.2 percent from a year ago. That's faster than wage gains.

"It's simply impossible to sell more homes when the number of homes for sale keeps falling," said Svenja Gudell, chief economist for housing data provider Zillow. "And the parts of the market most in need of more homes for sale, the low-to-middle segments, are also those experiencing the biggest inventory shortfalls."

Home construction has been slowed by a shortage of available workers, developers say. Home construction fell 4.7 percent last month, partly because of the hurricanes. And many homeowners are reluctant to sell with so few other houses available, creating a vicious cycle.

In Houston, home sales rose 4 percent in September from a year ago after falling 25 percent in August. Lawrence Yun, chief economist for the Realtors group, said some of that gain may reflect investors purchasing damaged properties.

In Florida, Hurricane Irma sharply lowered sales last month, which were 22 percent lower than a year ago, the Realtors said.

New construction may slow even more in the coming months, keeping inventories low, the Realtors said. Construction workers -- and building materials such as lumber -- are being diverted to repair and rebuilding work in the aftermath of the storms and the wildfires in California. That should slow new-home building and limit the number of homes for sale.

Employers are hiring and mortgage rates remain low, which typically would lift sales. But the number of lower-priced homes available is falling sharply, according to data from Redfin. It calculates that the number of newly-listed homes for less than $260,000 plunged 14.9 percent last month from a year ago. New listings priced between $260,000 and $470,000 fell 4.7 percent.

"The housing market is running on fumes due to low inventory," said Redfin chief economist Nela Richardson. "The inventory shortage is most severe for affordable homes. There has not been an increase in homes priced under $260,000 in two years.

Only homes priced above $470,000 -- the most expensive one-third of the market -- saw listings actually increase, by 2.3 percent.

That hasn't been the case in upscale Greenwich, Conn., where listings for higher-priced homes have dropped for the past four quarters.

Luxury-home listings in Greenwich have plunged 31 percent from a year earlier, according to a report Thursday by appraiser Miller Samuel Inc. and brokerage Douglas Elliman Real Estate. That's largely because sellers who failed to get their hoped-for price quit trying to find buyers and took their properties off the market to wait for a better day.

"Inventory is declining but sales aren't rising," Jonathan Miller, president of Miller Samuel, said in an interview. "It's mostly listings being pulled off the market."

Tastes are changing in Greenwich, home to many Wall Street executives who take the 50-minute train ride to Manhattan. Sales of lavish mansions on several acres have languished, while smaller homes closer to downtown get scooped up. In the third quarter, sales of luxury homes -- the top 10 percent of deals by price -- fell 13 percent from a year earlier to 21, the firms said. Condo purchases, meanwhile, jumped 35 percent to 58 transactions, the most for a quarter in data going back to 1999.

"We really don't have enough of those listings to sell," he said. "We need more."

The combination of low interest rates and rising home prices has created conditions that are attractive to house flippers. The real estate strategy -- in which a home is bought, renovated and resold quickly -- requires fast access to money, and developers are willing to pay higher interest rates for it. The loans are backed by the property and are short, typically running for a year or less. And the funds that finance them offer reliable returns of about 8 percent, for those who can meet minimum investments, generally $100,000.

The finance industry around house flipping has been active for decades, and it has been ticking up lately. Last year, 5.7 percent of all home sales were flips, the highest level since 2006, according to Attom Data Solutions, a national property database. The trend, popularized on TV series like HGTV's Flip or Flop and Flipping Out on Bravo, is attracting the interest of Wall Street: Last week, Goldman Sachs bought Genesis Capital, a leading lender to house flippers.

But the loans, sometimes referred to as fix-and-flip or hard-money loans, come with risks, including developers unable to pay them back and a drop in real estate prices that could make properties hard to sell or even rent.

Chris Gutek, a former equity analyst at Morgan Stanley who has been an independent investor in Grand Rapids, Mich., for the past decade, said he lost money on loan funds in 2008 but remained bullish on the sector.

"I was getting nice 12 to 13 percent interest for a few years, but I had one very bad experience in 2008," Gutek said. "I lost a bunch of money. It was not good underwriting."

Information for this article was contributed by Christopher Rugaber of The Associated Press, buy Paul Sullivan of The New York Times and by Oshrat Carmiel of Bloomberg News.