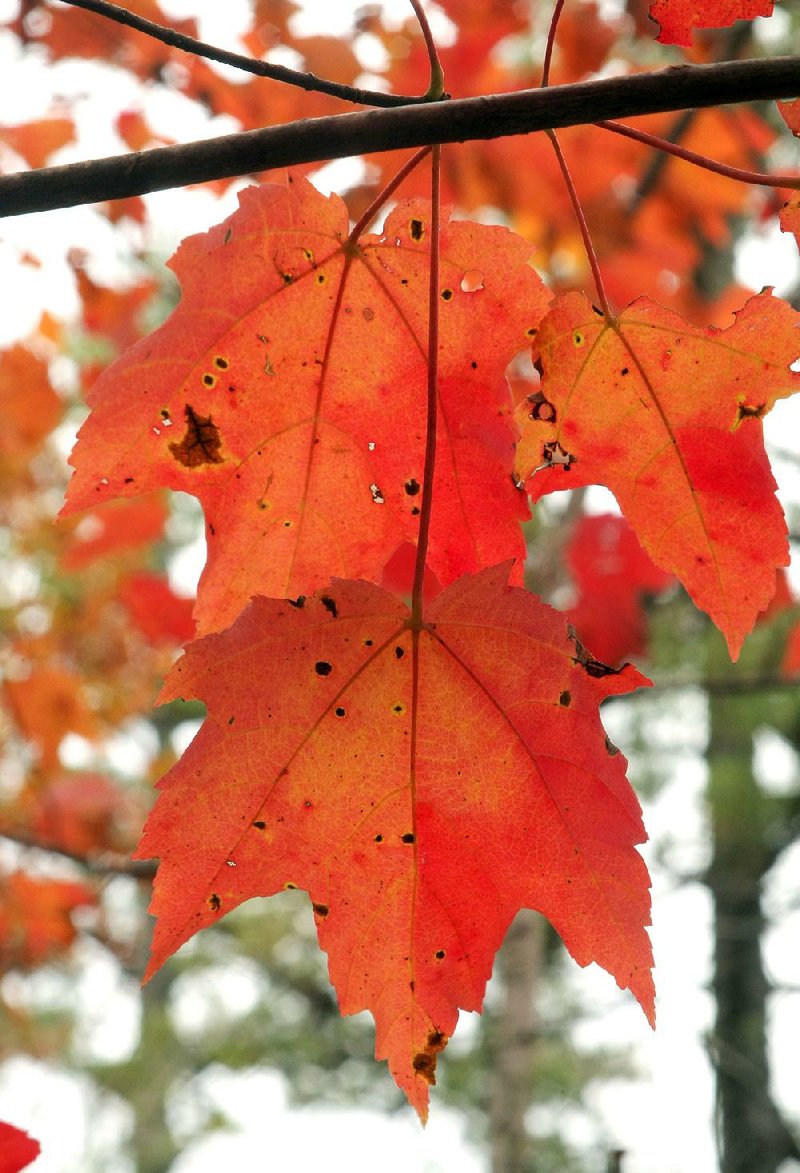 Autumn colors are developing this month across Arkansas.

When Joyce Kilmer wrote "I think that I shall never see a poem lovely as a tree," his often quoted and sometimes parodied verse failed to mention the captivating colors of fall foliage.

Making up for that omission each autumn is the Arkansas Department of Parks and Tourism, which provides ample online details updated weekly on the development of arboreal hues across the Natural State.

The report, updated each Friday, indicates that the turning of the leaves is in progress but not yet at its prime. More rain would help foliage to brighten. The peak color periods are estimated to be as follows:

The arkansas.com website also highlights eight routes where autumn leaves are likely to be especially vivid. They include:

• Crowley's Ridge Parkway National Scenic Byway. This drive runs roughly the length of Crowley's Ridge in otherwise flat northeast Arkansas. It begins a bit north of Piggott and winds its way through fertile land as far south as Helena-West Helena.

• Boston Mountains Scenic Loop. Most interstate highways are a blur of big trucks. But I-49 along with U.S. 71 provide views of colorful leaves from Alma to nearly the Missouri border. The landscapes include tree-garnished canyons and mountain passes.

• Talimena National Scenic Byway. Spanning one of the highest mountain ranges between the Appalachians and the Rockies, this itinerary takes leaf peepers winding for 54 miles. It follows the crests of Rich Mountain and Winding Star Mountain to Ozark National Forest.

• Scenic 7 Byway. Here's another popular route that spans the state. Arkansas 7 runs from the Missouri border to the Louisiana border. Driving its full length takes in the Grand Canyon of the Ozarks near Jasper, Buffalo National River, Hot Springs National Park and DeGray Lake.

• Pig Trail Scenic Byway. A somewhat challenging drive along Arkansas 16 and Arkansas 23 combines fall foliage with cozy small towns, proceeding north through the Ozark Mountains and winding up in Fayetteville.

• Interstate 530. The interstate stretch between Little Rock and Pine Bluff might not leap immediately to mind as a trove of autumn leaves. In fact, bottomland hardwoods can generate brilliant fall colors.

• Mount Magazine Scenic Byway. Arkansas 309 is the roadway for this stretch of fall foliage. Starting in Havana, it climbs northwest to Mount Magazine, the state's highest elevation at 2,753 feet. The route then winds down to Paris, taking in Cove Lake along the way.

For updated information on fall-foliage conditions around the state, visit arkansas.com/travel-tools/seasons/fall/fall-color-locations.

Print Headline: Peak season is near for dazzling fall colors on scenic byways