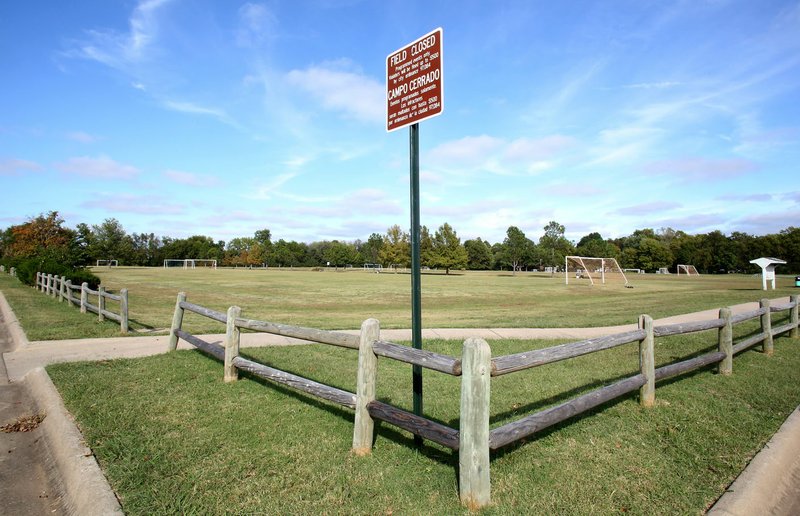 Lewis Soccer Fields in Fayetteville is one of two parcels the University of Arkansas is selling. The lease between the city and the university is set to expire in 2018. University officials hope to eventually sell the 27 acres at Lewis Soccer Fields, appraised at $4.1 million. Youth soccer programs there will move to Kessler Mountain Regional Park. - Photo by David Gottschalk

FAYETTEVILLE -- Aspiring builders could put a cottage on the outskirts of town or an apartment complex near a school if they buy either of two pieces of land the University of Arkansas, Fayetteville wants to sell.

The university intends to sell Lewis Soccer Fields, which the city has used for youth teams and other programs since 1993, as well as 103 wooded acres off Old Wire Road. 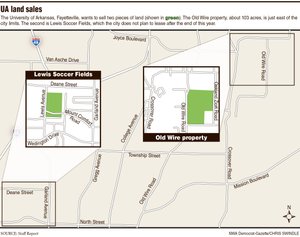 Photo by Chris Swindle
The University of Arkansas, Fayetteville wants to sell two pieces of land.

The university is selling a third parce. It’s about 40 acres in the Baldwin community, southeast of Fayetteville, and was appraised at $180,000. The property is bisected by Ed Edwards Road, also known as Washington County 53, as it climbs Robinson Mountain heading south from Baldwin. Most of the university property is to the west of the road, where a deep ravine plunges into thick woods. Stonebridge Meadows Golf Club lies about 2 miles away as the crow flies.

“This property was conveyed to the state of Arkansas by David Walker on Oct. 9, 1871, for the nominal sum of $1, ‘for the use of the agricultural university,’” according to UA System President Donald Bobbitt. “The deed does not contain any restrictions on the sale of the land and it was one of several land donations to secure the location of the Arkansas Industrial University in Fayetteville.”

The Lewis fields, made up of 27 acres across the street from Asbell Elementary School, appraised for $4.1 million, or about $150,000 an acre. The Old Wire property, east of Joyce Boulevard and Crossover Road, has an appraised value of more than $2 million, which comes to about $20,000 an acre.

Money generated from the land sales would go toward university laboratory needs. About 40 percent of the new Don Tyson Center for Agricultural Sciences, which has a dedication set for November, is unfinished. The Crop, Soil and Environmental Science facilities date back 70 years and need an upgrade, said Mark Cochran, vice president for agriculture.

The administration of the University of Arkansas System Division of Agriculture wants to handle the sales in-house and will wait at least three months before formally listing the properties, Cochran said.

Administrators want to sell the properties at the appraised value, Cochran said. There are no restrictions or requirements in the deeds, so the university is free to do what it wants with the properties.

"We feel very fortunate with these properties," Cochran told the UA System Board in September. "We acquire land in a whole lot of different ways."

Time to move on

Two parcels make up the entire Old Wire Road tract. The H.C. Schmieding Produce Co. profit sharing plan, an Arkansas trust, sold the wooded acreage to the university's board in 1975 for $150,000, according to the Division of Agriculture. Schmieding Produce has its headquarters in Springdale.

The agriculture division wanted to do fruit research on the property at one point but it didn't work out, said Mary Hightower, division spokeswoman.

The city began leasing the Lewis property in 1993 as an exchange. The university allowed the city to put in soccer fields on the 27.5 acres it owns across from Asbell. In turn, the city provided fire service to the university's agricultural experiment station, which at the time sat outside the city but has since been annexed.

Then-Mayor Fred Hanna, in his 1994 state of the city address, touted the deal as an example of the good working relationship between the city and the university. The 25-year lease expires June 30, 2018.

The Parks and Recreation Department has long planned to move youth soccer and other programs from Lewis to the Kessler Mountain Regional Park. About 1,600 players participate in the soccer program.

City officials agreed to terminate the lease at the end of this year, said Connie Edmonston, parks director. The last soccer games of the season at Lewis Soccer Fields wrapped up last week.

Justin Eichmann, Fayetteville School Board president, said he wasn't aware the land was up for sale. The School Board hasn't discussed the possibility of purchasing it.

Eichmann, like many other parents, has fond memories of his children playing soccer at Lewis. He played there himself.

But, Eichmann said, you can't knock the view at the regional park's new fields.

"It's kind of bittersweet. I've been to I don't know how many -- hundreds -- of games there at Lewis," he said. "It's always packed in a lot of people. It seemed like on Saturday mornings every hour there would be a new shift of parents."

Angie Coleman said her son Caleb, 11, and daughters Sydney, 9, and Siena Quinn, 7, played and practiced at Lewis for years. With no benches, parents mixed and mingled. Coleman said she made a lot of friends there.

"It's a really good social scene," she said. "We were all kind of in the same boat."

Division of Agriculture officials haven't decided what to do with the land between the time the lease expires and a new owner takes over, Hightower said.

"We'll develop a plan for the land closer to the time when the City of Fayetteville is finished with the parcel," she said.

The Division of Agriculture won't have to do anything with the city or county governments to sell the land. However, development at either location likely would have to meet certain requirements at both levels.

Mud Creek runs through the Old Wire tract, and a portion of the land is in a floodplain, so a permit would be required to develop there, said Nathan Crouch, senior planner with Washington County.

The area falls under a dual jurisdiction because it's within Fayetteville's planning area, which stretches about a mile outside the city. The county regulates development in the planning area, but changes such as a land split or property line adjustment would go to the city first, then the county, Crouch said.

The Lewis tract is under a zoning that lifts many of the city's typical requirements and guidelines because of the university's status as a public institution, according to the city's code. Government buildings, hospitals and churches also fall in the institutional category.

The zoning remains the same when the land sells, but a developer would almost assuredly request a rezoning from the city, said Quin Thompson, city planner.

The city's 2030 land use map puts the Lewis property under the "non-municipal government" category, but everything around it except for the school has a residential neighborhood classification. That designation can mean anything from single-family homes to large apartment complexes to a mix of commercial and residential, Thompson said.

"The main legal test for appropriate zoning is compatibility with surrounding properties," he said. "So obviously putting an industrial zone in there is not likely to meet that test by any argument I could think of."

"It's time, I think, for both of these properties," Hightower said. "They go back into the tax base, and it'll benefit the community."