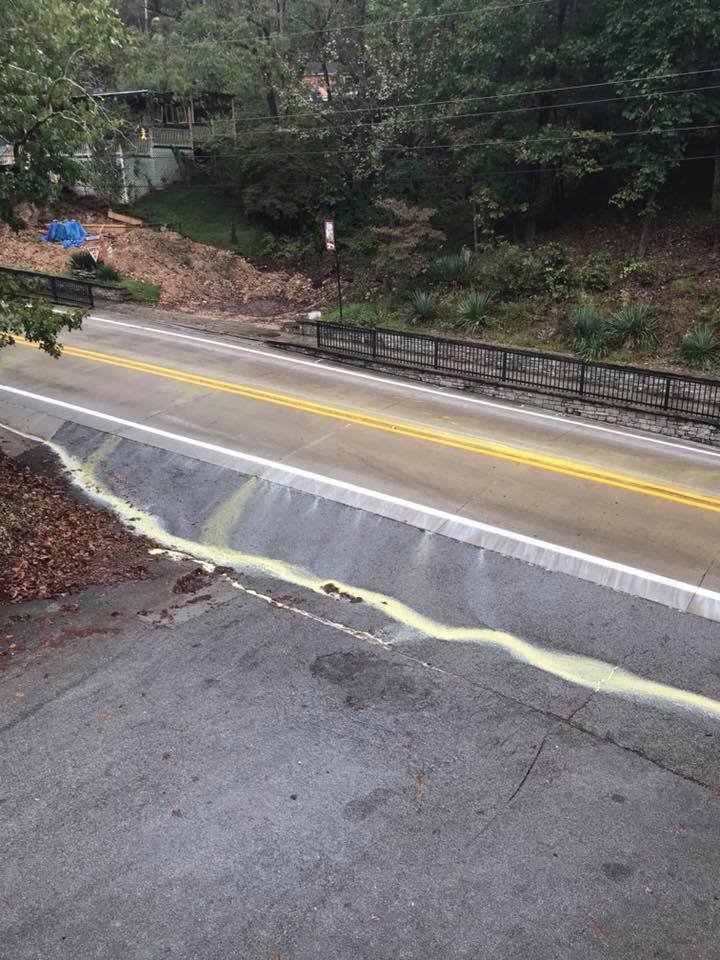 The Arkansas Transportation Department painted stripes on Arkansas 23 through Eureka Springs on Wednesday, but rain quickly washed the yellow paint off the road and into East Leatherwood Creek. (Photo by Damon Henke)

Eureka Springs had a yellowish tint on Wednesday.

The Arkansas Department of Transportation painted the yellow stripes on Arkansas 23 -- also known as Main Street -- just before a rain washed the paint off the road.

By Wednesday afternoon, yellow paint was being tracked into shops and discoloring creeks.

Dusty Duling, manager at the Grand Central Hotel, said he saw lots of yellow when he left to go home at 5 p.m. Wednesday.

"It was just really shocking looking," he said. "I thought 'My God!'"

Facebook was flooded with photos of yellow water in East Leatherwood Creek.

"I don't know if it was the highway department or a subcontractor or who, but painting when it's raining doesn't work," Berry said.

Steve Lawrence, district engineer for the transportation department, said he doesn't know when the rain began on Wednesday but he figures it was after the crew began painting at 7:40 a.m.

"They worked for an hour and stopped," he said. "I guess they were fearing the weather."

Chad Manus, a restaurant manager and school bus driver, said the road was still damp early Wednesday morning from rain on Tuesday. Manus said his fog lights picked up wet spots on the road along with the freshly painted lines.

By late Wednesday afternoon, the water in East Leatherwood Creek was a color somewhere between that of Crystal Light and yellow curry, Manus said.

Damon Henke, owner of Ozark Mountain Vacation Rentals, said it looked like 85 percent of the paint washed off with the rain.

Kim Stryker, the mayor's assistant, said she sent an email to the state Transportation Department saying, "We've got a mess because your yellow paint is flowing freely through the streets of Eureka Springs."

Stryker said they were worried about the Corvettes because of the "splashing river of yellow" in Main Street.

But Dorene Duffer, a director of the Corvette event, said she'd heard no complaints about the paint from any of the car owners.

Lawrence said the road remained open throughout the ordeal, but he sent three people over from his district office in Harrison to warn motorists about the wet paint. One of the employees stayed through the night after putting orange cones in the middle of the road.

"It was not an ideal situation," he said. "Our crews did the best that we could at that time."

Lawrence said he was told the paint isn't toxic. But he said it can be very difficult to clean off a vehicle after the paint has dried. Lawrence said anyone who believes their vehicle was damaged by the yellow paint can file a claim with the Arkansas Claims Commission.

Lawrence said the striping crews work out of the main office in Little Rock, so he didn't have much information about the painting work that was done in Eureka Springs on Wednesday. A spokesman for the Transportation Department in Little Rock didn't return telephone calls or emails on Thursday.

Lawrence said he assumes the department will repaint the yellow lines down Arkansas 23 through Eureka Springs.