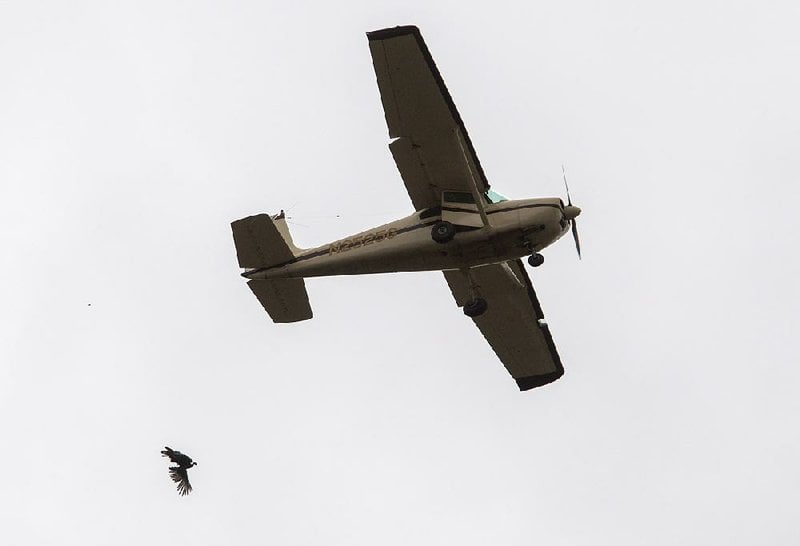 A turkey falls from pilot Dana Woods’ 1959 Cessna 182B at the 2016 Turkey Trot festival in Yellville. - Photo by Jason Ivester

Animal-welfare activists are trying to ground "The Phantom Pilot" before live turkeys fall from the sky during the annual Yellville Turkey Trot festival Oct. 13-14.

Rose Hilliard of Bruno said she went to the Marion County sheriff's office Monday to file a complaint about the 50-year tradition of tossing turkeys from a low-flying airplane.

"They are being told a crime is going to be committed," she said. "I would hope they would do the right thing and arrest and prosecute."

Hilliard was referring to The Phantom Pilot, who has hinted on his Facebook page that he will fly again this year.

"Turkey Trot is around the corner," according to the Aug. 30 Facebook post. "Keep flying, my friends, and I will see you there!"

Then, Sept. 28, he posted an aerial photo of the Yellville town square with the words: "Drop zone established. Payload release has been authorized."

"I just want it to stop," she said. "This is not a nice, community thing. The festival is wonderful, but cruelty to animals doesn't need to be a part of it."

Evans said a deputy has been working on Hilliard's complaint. The sheriff expects to receive the deputy's report Friday.

If an investigation is warranted, Evans said, he'll ask the Arkansas State Police to do it so there will be no conflict-of-interest allegations.

Gemma Vaughan, an animal-cruelty caseworker with People for the Ethical Treatment of Animals, said the state police has repeatedly told the organization that this case falls under the jurisdiction of the sheriff's office.

"We have gone to the Arkansas State Police numerous times over the course of many years," she said.

David Ethredge, the prosecutor for Arkansas' 14th Judicial Circuit, said his office can't prosecute a case unless it first receives an affidavit or misdemeanor citation from a law enforcement agency.

According to Arkansas Code 5-62-103, cruelty to animals is a misdemeanor punishable by up to one year in jail and a fine of up to $1,000. Upon a fourth conviction within five years, cruelty to animals becomes a felony in Arkansas, and the guilty party is ordered to undergo a psychiatric evaluation.

Hilliard, who describes herself as an animal-rescue person, said she isn't directly affiliated with PETA.

But Vaughan said people who are directly affiliated have filed similar complaints with the sheriff's office.

"The use of live animals in this event makes Yellville seem as backward as you can get," she said. "The turkey drop is a throwback to a sorry time when human beings were bone-ignorant of animals' feelings."

The identity of The Phantom Pilot isn't always revealed, but Dana Woods, a Mountain View pharmacist and alderman, admitted last year that he has been The Phantom Pilot for about 15 years. Newspaper photographs in 2015 revealed the identification number of Woods' single-engine 1959 Cessna 182B. He flew again as The Phantom Pilot last year.

Investigators with the Federal Aviation Administration met with Woods and determined he wasn't doing anything that violated their rules because turkeys were being "released" from his plane as it flew over Crooked Creek, which is two blocks south of the Yellville square, where the festival is held.

It's legal to drop objects from airplanes as long as they don't damage people or property on the ground, said Lynn Lunsford, a spokesman for the FAA in Fort Worth.

But animal cruelty isn't the FAA's jurisdiction, he said.

It's not clear on The Phantom Pilot's Facebook page who the pilot is. There have been different Phantom Pilots over the history of the festival.

According to a Roller Funeral Homes obituary for Harold C. Mears of Harrison, who died in July at the age of 84, he was "one of the first Phantom Pilots of Yellville's Turkey Trot."

For more than 50 years, during the annual Yellville Turkey Trot festival, an airplane flies by and several live turkeys are dropped -- at the beginning released over the crowd and now over the creek.

Most of the turkeys glide to a landing and are then caught by people at the festival, who sometimes have them for dinner during the holidays. Last year, about a dozen turkeys were dropped from Woods' plane, and two of them reportedly died on impact.

There were no airplane drops of turkeys from 2012-14. Woods resumed the practice in 2015. He said the hiatus wasn't because of outside pressure. During that time, turkeys were tossed from the roof of the Marion County Courthouse or from a stage in front of the courthouse.

In a March 15 letter, Trevor Smith, a "legal fellow" with the PETA foundation, asked Evans to charge Woods and any accomplices with cruelty to animals.

Vaughan said PETA was informed in April that it needed to make that complaint in person, so a PETA representative did that in July, but the organization has yet to hear back from the sheriff's office.

She noted that Evans wasn't sheriff when the festival was held in 2016.

This will be the 72nd annual Turkey Trot festival. A logo on the Yellville Area Chamber of Commerce's website shows a turkey in a tunic and laurel leaf crown, striking a Julius Caesar pose. Above the turkey's head are the words "I came. I trotted. I conquered."

The festival features music, food and a parade. It also includes a Miss Drumsticks pageant, in which "the winners are chosen while their faces and upper bodies are hidden," according to the chamber's website at yellville.com/TURKEY-TROT.html.

"They certainly have a big role in organizing the event," Vaughan said of the chamber. "They have sponsored this for many years. They have the ability to end this practice."

Whether wild turkeys can fly has been a central issue of the turkey-drop debate, which received more attention after a 1978 episode of the television show WKRP in Cincinnati in which turkeys were dropped from a helicopter as a Thanksgiving promotion and hit the ground "like sacks of wet cement."

"As God is my witness, I thought turkeys could fly," said Gordon Jump, who played WKRP manager Arthur Carlson on the TV show.

Wild turkeys can fly at speeds up to 55 mph, but they usually fly from treetop to treetop, at an altitude of less than 100 feet. Woods said last year that the turkeys were released at an altitude of about 600 to 700 feet over the creek.

Yvonne Vizzier Thaxton, a professor of poultry science at the University of Arkansas, Fayetteville, said that altitude would be enough to cause stress to the birds. She called the turkey drop a "horrific act of abuse."