Beyond Bielema: The search for Arkansas' next football coach 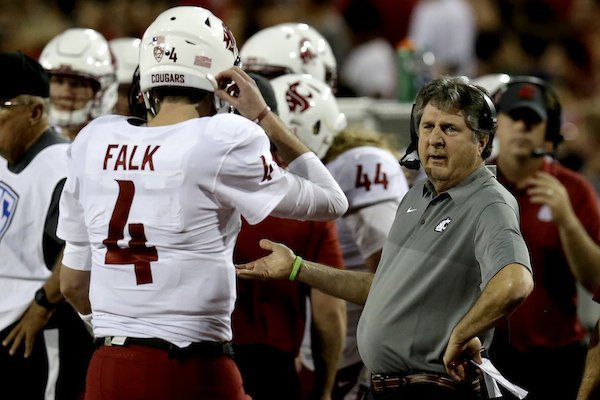 FAYETTEVILLE -- Washington State Coach Mike Leach endeared himself to Arkansas Razorbacks' fans -- especially those in central Arkansas -- when he was asked earlier this season about the loudest visiting stadiums he's experienced.

Leach was Kentucky's offensive coordinator in 1998 when the Razorbacks rallied to beat the Wildcats and star quarterback Tim Couch 27-20 in War Memorial Stadium.

"Entirely concrete structure," Leach said. "It's as if you had a football game in the neighbors' basement and all the kids were yelling louder than hell."

Leach said the noise level and deafening echo in War Memorial Stadium was evident even in pregame warmups.

"You'd clap your hands and you'd hear it five times," he said. "When you figure there's 45,000 and you multiple that times five, that equals approximately 250,000 people.

Could Leach hear the War Memorial Stadium crowd cheer for his team when the University of Arkansas, Fayetteville plays Ole Miss next season in Little Rock?

Arkansas has a coaching vacancy with the firing of Bret Bielema on Friday.

Leach has been among the coaches many Razorbacks fans have been talking about since the early part of this season.

Earlier this week BetOnline.com, in anticipation of Bielema's dismissal, listed Leach as the favorite to be Arkansas' next coach.

After a Razorbacks fan started a petition in September calling for Leach to be hired at Arkansas, the coach of the No. 13 Washington State Cougars was asked about it.

"I don't make anything of it," Leach said. "I'm busy worrying about getting a first down against Oregon State."

Washington State got 27 first downs in its 52-23 victory over the Beavers.

Here's a look at some possible candidates for the Arkansas job.

Keep in mind that no one connected Bielema -- who came to Arkansas from Wisconsin -- to the Razorbacks until the day he was hired. 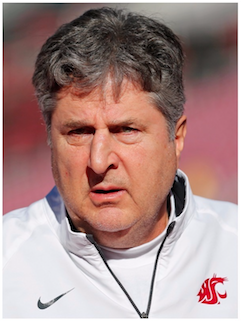 WHY IT MAKES SENSE TO HIRE HIM Leach has won at two programs that aren't traditional powers in the Big 12 or Pac-12, including an 84-43 record in 10 seasons at Texas Tech. He has previous SEC experience as an assistant at Kentucky and would bring an exciting offense and off-beat sense of humor. There's more money and more exposure in the SEC than in the Pac-12.

WHY IT DOESN'T MAKE SENSE Leach hasn't coached in the SEC in nearly 20 years and has been leading programs that aren't in the media spotlight on a daily basis. How would he do in the SEC pressure-cooker? Would he be able to recruit the South well enough to sign the athletes Arkansas needs to win in the SEC? 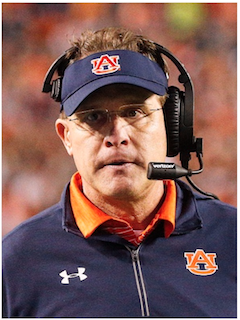 RECORD 54-23 overall in six seasons, including 10-2 this season at Auburn.

WHY IT MAKES SENSE TO HIRE HIM Malzahn grew up in Arkansas, where he became a renowned high school coach. He was the Razorbacks' offensive coordinator in 2006 when they last won the SEC West, and Auburn's offensive coordinator in 2010 when he won the Broyles Award as the nation's top assistant coach. He coached Arkansas State to a Sun Belt title in his only season there before taking the Auburn job. He'd have pressure to win at Arkansas, but nothing like the pressure at Auburn.

WHY IT DOESN'T MAKE SENSE Auburn is set up to compete for SEC and national titles on a consistent basis. Malzahn called plays for the national champion Tigers in 2010. Plus, it would take a ton of money for Arkansas to hire him. Much more than the $4.2 million Bielema was paid. 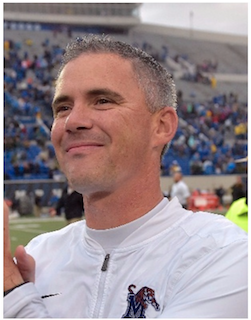 WHY IT MAKES SENSE TO HIRE HIM Norvell played at the University of Central Arkansas and was a graduate assistant there, so he should have a pretty good understanding of the state. He's had a big season at Memphis -- right in the middle of SEC country -- and has a good background as an offensive coordinator. He has coached in a Power 5 conference at Pittsburgh and Arizona State. His salary of $1.86 million would be easy for Arkansas to top.

WHY IT DOESN'T MAKE SENSE Norvell has been a head coach for only two seasons, both in the American Athletic Conference. He has no SEC coaching experience. Would he be able to hire a strong staff at Arkansas that can coach and recruit well enough for Arkansas to raise its victory total? He also may be in play for a better SEC job, such as Tennessee. 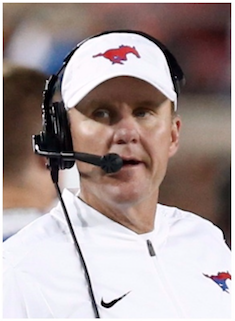 WHY IT MAKES SENSE TO HIRE HIM Morris took over an SMU program that was 1-11 the previous season and has gradually increased the Mustangs' victory total. He was a Texas high school coach for 16 seasons, so he should be able to recruit a talent-rich state crucial to Arkansas. He hasn't coached in the SEC, but he was the offensive coordinator at Atlantic Coast Conference powerhouse Clemson. He makes $2 million, so he would be an affordable hire.

WHY IT DOESN'T MAKE SENSE Would Arkansas be able to sell hiring a coach who has a losing record at SMU to the Razorbacks' fan base? Morris never has coached in the SEC and his only college head coaching experience is in the AAC. Morris is a Texas A&M graduate and might be in play for the Aggies' job. 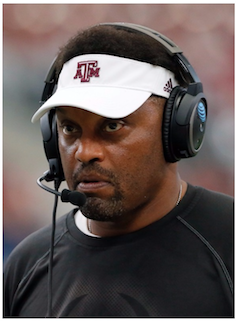 WHY IT MAKES SENSE If you can't beat him, hire him. Sumlin is 6-0 against the Razorbacks as the Aggies' coach. He was 51-25 at Texas A&M going into Saturday night's LSU game. He has coached in Texas the past 10 seasons -- including four seasons as Houston's head coach -- and before that he was an Oklahoma assistant, so he knows how to recruit the Lone Star state.

WHY IT DOESN'T MAKE SENSE Would Arkansas fans accept a coach who according to media reports will be fired at Texas A&M? He never had a losing record at Texas A&M, but his teams have had a habit of fading in November. He peaked in his first season at Texas A&M, going 11-2 with Heisman Trophy winner Johnny Manziel at quarterback, and he's had trouble with quarterbacks transferring. 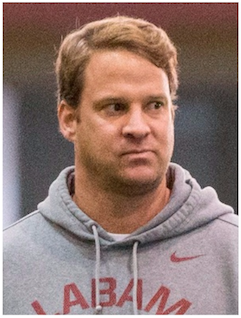 RECORD 43-28 overall in six seasons, including 9-3 at Florida Atlantic this season.

WHY IT MAKES SENSE TO HIRE HIM Kiffin is the son of former Arkansas defensive coordinator Monte Kiffin and a brilliant offensive mind. He took over a Florida Atlantic program that was 3-9 last season and turned the record around. According to published reports, he wanted to leave the Oakland Raiders for Arkansas after the 2007 season when Bobby Petrino was hired to be the Razorbacks' coach. He has extensive SEC experience as Tennessee's head coach in 2009 and Alabama's offensive coordinator from 2014-2016.

WHY IT DOESN'T MAKE SENSE Kiffin can be a loose cannon with what he says and tweets, and he draws attention to himself and his team. He was fired as the Raiders' coach after the 2008 season, left Tennessee after his only season in Knoxville in 2009 to go to USC and was fired as the Trojans' coach midway through the 2013 season. Nick Saban let him go as Alabama's offensive coordinator before playing Clemson in the national title game last year. So Kiffin tends to tick people off. 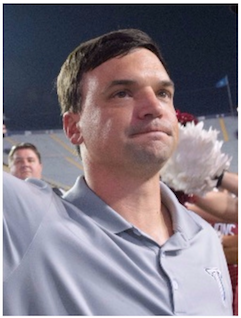 WHY IT MAKES SENSE TO HIRE HIM Brown is 19-5 at Troy the past two seasons, including a 24-21 victory at LSU this year. He knows what it takes to play and coach in the SEC because he was a wide receiver and offensive coordinator at Kentucky. He runs a high-octane offense, as evidenced by Troy's 62-9 victory over Texas State on Friday.

WHY IT DOESN'T MAKE SENSE Is Brown ready for an SEC job after just three seasons at Troy? He was Tommy Tuberville's offensive coordinator at Texas Tech from 2010-2013, but can he recruit Texas the way the Razorbacks need to effectively add players from there? Is this the kind of hire that will get the fans excited? 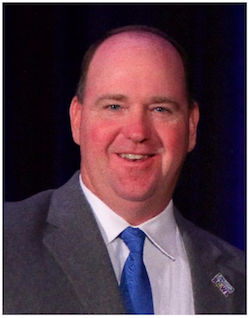 WHY IT MAKES SENSE TO HIRE HIM Holtz understands Arkansas and the Razorbacks. He lived in Fayetteville for seven years from 1977-1983 when his father, Lou Holtz, was Arkansas' coach. Skip Holtz coached in the SEC at South Carolina with his father and has won Conference USA titles at East Carolina and Louisiana Tech. He's 5-3 in bowl games.

WHY IT DOESN'T MAKE SENSE Holtz was 18-21 at South Florida and fired after three seasons in his only head coaching job outside of Conference USA. Razorbacks fans have fond memories of Lou Holtz, and they should respect what Skip has done in his career, but his Bulldogs were 5-6 this season going into their regular-season finale. 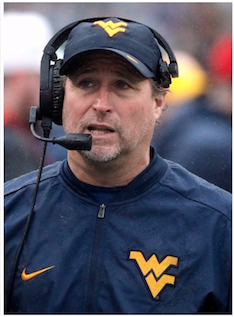 WHY IT MAKES SENSE Holgorsen is known for his high-powered offenses and has built West Virginia into a competitive program in the Big 12. He was an assistant coach at Texas Tech, Houston and Oklahoma State, so he has recruiting experience in Texas. After seven seasons at West Virginia, he may feel it's time to move on to another school.

WHY IT DOESN'T MAKE SENSE Holgorsen has no ties to Arkansas and never has coached in the SEC. He seems to have a pretty good thing going at West Virginia, so why take a chance -- as Bret Bielema did in leaving a winning program at Wisconsin -- on trying to win at Arkansas in the SEC West? 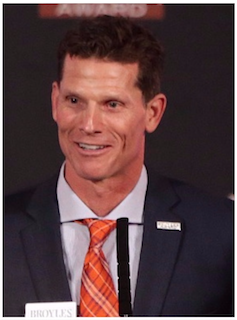 WHY IT MAKES SENSE Venables won the Broyles Award last season when he helped Clemson win the national championship. He's long been considered one of the top defensive coordinators, including a stint at Oklahoma, where he also helped win a national championship in 2000. He appears to be overdue to run his own program, and Arkansas might be a good fit if the Razorbacks can't hire an experienced head coach.