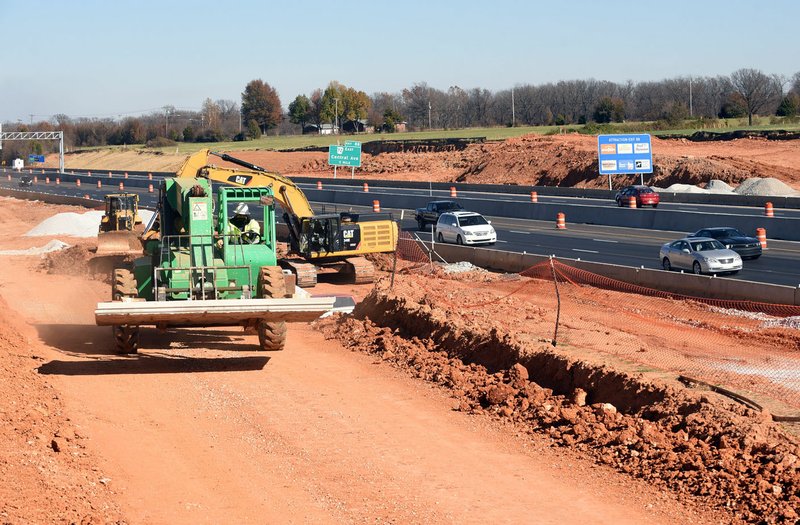 Work is wrapping up on a couple of big Interstate 49 projects in Benton and Washington counties and another is significantly ahead of schedule, according to two Arkansas Department of Transportation district engineers.

The Interstate 49 corridor has 17 projects, including interchange improvements and widening, either recently completed, in progress or planned along the 26 miles between Fayetteville and Bentonville. All the work is expected to be completed or well under way by 2020. 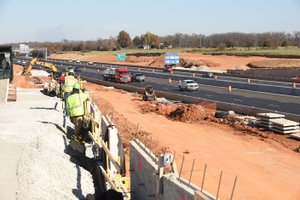 The $1.8 billion Connecting Arkansas Program is one of the largest road construction programs the Arkansas Department of Transportation has undertaken. The 35 projects in the program are expected to widen and upgrade 200 miles of major highways and interstates across the state. It is funded primarily by a temporary half-percentage-point increase in the statewide sales tax voters approved in 2012. The tax expires in 2023.

In 2011, voters permitted the department to issue up to $575 million in bonds to help finance a $1.2 billion program to rebuild the sections of the state’s interstate system that are in the poorest condition. A 4-cent-a-gallon increase in the tax on diesel fuel, enacted by the Legislature in 1999, also is part of the package.

Projects in Northwest Arkansas are expected to receive about $375 million. They include widening Interstate 540 between Fayetteville and Bentonville along with interchange improvements; completion of the Bella Vista Bypass; and beginning construction of the U.S. 412 Springdale Bypass from Interstate 540 to Arkansas 112.

"The big push was to get the extra lanes added so we could carry traffic, and now we're focusing on the interchanges," said Chad Adams, who oversees District 4, which includes Washington County.

Much of the work has been done during off-peak hours to minimize the impact on commuters.

"One of the things that has helped is anything that required a lane closure, we've done it at night so we've not really caused as much disruption, I feel like, as what people might have expected," said Steve Lawrence of District 9, which includes Benton County.

"I-49 is coming along great," said Dick Trammel of Rogers, chairman of the Arkansas Highway Commission. "We're very fortunate the contractors have had good weather."

Widening and interchange work in Bentonville that has slowed traffic for many Wal-Mart employees and visitors is going well despite minor setbacks with utility work, Lawrence said.

"On the Eighth Street interchange project, our estimated completion date is middle of next year," Lawrence said. "The widening project, which goes from Exit 86 up to the 72 interchange, we're expecting it to be complete any time, by the first of the year, I'd say."

Lawrence said bids for a new Exit 85 interchange at West Walnut in Rogers is expected to be let in December 2018.

The other big project in Benton County is completing the Bella Vista Bypass, Lawrence said.

The Arkansas Highway Commission approved a bid Monday to build 8.8 miles of the two additional lanes of the Bella Vista Bypass between North Walton Boulevard and Benton County 34. Kolb Grading was the apparent low bidder at $27.5 million. Weather permitting, construction is expected to begin in two to four weeks. Completion is expected in late 2019.

"We let the job on the other two lanes. Once we get that built, what will remain will be the interchange where you take off on the Bella Vista Bypass," Lawrence said. "We're going to build a full-blown interchange, and then the work from County Road 34 up to the state line."

Earlier this year highway commissioners said they had money on hand for the remaining two lanes of the Bella Vista Bypass and the project would go forward for bids.

"That should encourage Missouri even more to come meet us," Trammel said. "Once Missouri starts, they only have about half the distance to go that we do. Hopefully, in a reasonable time we'll be using four lanes."

Trammel said more than 7,000 cars a day, primarily residents of Gravette and Bella Vista, already use the two lanes.

"That's 7,000 cars that are not on 71 piling up every morning and every afternoon," he said. "We're getting something done."

The Northwest Arkansas Planning Commission announced last month it intends to apply for a federal grant to help cash-strapped Missouri finish its part of the bypass. Regional planners said they are now calling the Bella Vista Bypass the Missouri/Arkansas Interstate 49 Connector Project to better denote its regional significance.

Missouri has acquired the right of way, done an environmental study, designed the road and set aside $18.4 million for the project, regional planners were told. But, Missouri is about $32.4 million short.

The $32.4 million will hopefully come from a federal Department of Transportation grant program known as Infrastructure for Rebuilding America. The money would be given to Missouri, which would then build the highway.

Regional Planning can apply for the money because the entire project, on both sides of the state line, is within it's planning area.

The Northwest Arkansas Council and transportation departments in both states support the idea.

Lawrence said work on the U.S. 412 Springdale Northern Bypass is ahead of schedule.

The bypass is intended to relieve congestion through Springdale on Sunset Boulevard, South Thompson Street and Robinson Avenue, the city's main east-west route, which is designated U.S. 412.

The 4-mile section between I-49 and Arkansas 112 is under construction. It should also serve as a jumping off spot for a planned access road to the Northwest Arkansas Regional Airport.

"The Springdale Northern Bypass, which ties in to I-49, we're expecting to have it done and open to traffic by the summer of next year," Lawrence said. "We actually moved the completion date up by several months, I think eight or nine months just because the contractor is making good progress."

In Washington County, extensive work at the the interchanges of I-49 and the Fulbright Expressway and Garland Avenue should be done soon, Adams said.

"They're working steadily there. The projected completion date is still around the end of the year or first part of next year," Adams said. "They've got all phases going on. They're paving, a lot of asphalt these days."

"We're going to restripe it with five lanes and there will be a center turn lane in that area," Adams said.

Adams said a bid was let Nov. 15 to move a portion of Old Missouri Road to the west of its current location.

That project will move 1.9 miles of Arkansas 265 between Randall Wobbe Lane and Arkansas 264 in Benton County. APAC-Central was the low bidder at $10.2 million. Construction is expected to begin in two to four weeks, weather permitting, and completion is expected in early 2019.

Adams said two of the last interchange projects are coming up further south on I-49.