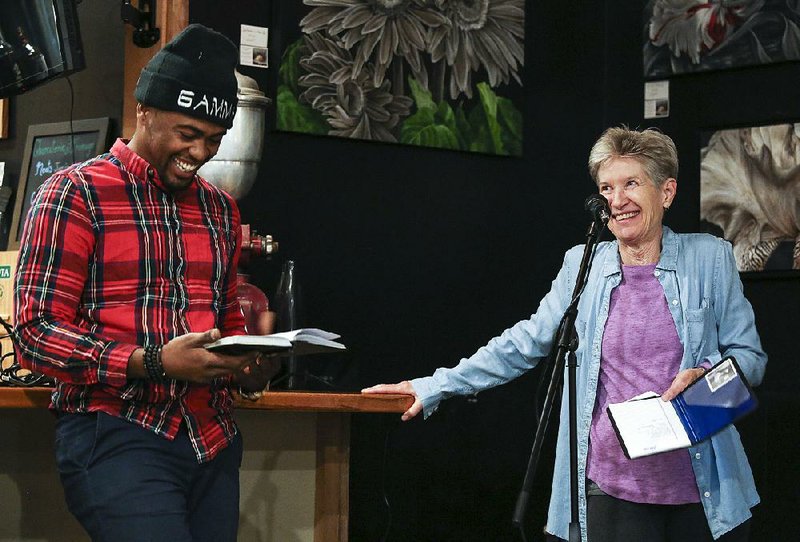 Karen Hayes jokes with Gamma, a poet from Little Rock, while introducing him to the crowd during open mic night at Guillermo’s Coffee, Tea and Roastery in Little Rock on Nov. 9. Hayes gained a newfound love of poetry after her husband was diagnosed with Alzheimer’s several years ago.

Sitting criss-cross-applesauce on the floor of an Alzheimer's care facility, Karen Hayes invited everyone to join her on the moon.

The North Little Rock 63-year-old had cut a circle from a thermal Mylar blanket -- it's metallic sheen a passable lunar gleam -- and laid it on the laminate floor.

From the middle, Hayes announced, "I'm on the moon. Who wants to go?"

She beckoned to the people around her, all patients who live at Brookdale Chenal Heights, a living center for senior citizens in west Little Rock.

They'd all been diagnosed with some form of dementia. When Hayes announced she was on the moon, they looked at her with "puzzlement and wonderment," she recalled.

"Then, there was that willing suspension of disbelief," Hayes said.

Some joined her. Others walked around the edge to avoid touching the moon's silvery surface, she said.

When Hayes' husband, Bob, died in 2014 after being diagnosed with Alzheimer's three years earlier, she began a campaign of artistic projects.

She brought the moon, music and prose to dementia patients. She started writing about the disease that took her husband. And she forged a traveling poetry project, typing poems for strangers she encountered.

For Hayes, the loss of her husband shook free some creative energy.

"I'm a person who's been handed my life back," she said. "Yes, I had a life and mind with [Bob]. Yes, we had things we wanted to do, places we wanted to go.

"I was happy in that life, but that was done."

Hayes said she's always written, but her life took her in another direction.

After her childhood in Hot Springs, Hayes got a bachelor of fine arts degree in theater performance at the University of Tulsa.

Her father died during her senior year. Her mother died the summer after she graduated.

Adulthood hit hard, Hayes said. She eventually became an accounting clerk, like her father. She's held that job for the past 36 years and said she loves the work.

She met Bob, a lifelong bar musician, at a Shakey's Pizza joint on Rodney Parham Road where he played four nights a week. She was a redhead, then. He teased her from the stage, Hayes remembered.

After Bob was diagnosed with Alzheimer's, his descent was swift.

"It was like 'boom.' Crash and burn. It was quick," Hayes said. She was his primary caretaker.

As Bob got worse, Hayes would sing songs -- lots of Hank Williams -- or alter common jingles to make him laugh: "If you're happy and you know it, pick your nose."

He could still strum the guitar. They danced to the romantic Cuban music of the Buena Vista Social Club.

Through those artistic connections, Hayes said she eventually understood how to both be happy as a caretaker and make Bob happy, despite his deteriorating mental state.

"About the time I was figuring that out, he was gone," she said.

After Hayes was widowed in September 2014, she "caught fire," according to her resume. She wrote about Bob, about her experience as his caretaker and about the gorgeous and ugly things Alzheimer's brings to a married couple.

She wrote poems and searched for like-minded poets.

Hayes went to open mic nights at coffeehouses. At a recent reading at Guillermo's Coffee, Tea and Roastery, she recited her work for anyone who'd listen: poetry enthusiasts, high school couples sneaking kisses and a girl who couldn't control her hiccups.

And Hayes began to volunteer at Brookdale Chenal Heights a couple of times a month. She'd bring a typewriter, tell people she was working on a story and ask for their help. Or she'd sing, like she did with Bob.

She would read parts of famous poems and plays that people already knew, like William Shakespeare's Hamlet. Hayes once took in a pumpkin, which became the skull of Yorick, the exhumed court jester whom Prince Hamlet addresses.

Patients passed around the pumpkin, gazed at its orange flesh and repeated, "Alas, poor Yorick! I knew him."

In poetry, "there's no failure," Hayes said. People with dementia would free associate. One day, Hayes wore a devil's tail and asked the assembled cohort if they had a tail, what type of tail would it be?

One man told a woman named Phyllis that if she had a tail, it'd be a peacock's plume.

Famous lines would spark recognition in the faces of men and women who had previously been uninterested, Hayes said.

"It is so surprising when people who have just been tuned out, when they tune in a bit, and then tune in quite a bit," she said.

Hayes began training with the Alzheimer's Poetry Project, an international organization that tries to improve the lives of people with Alzheimer's through poetry.

Gary Glazner, who founded the project, considers Hayes among the best of the thousands of people with whom he's worked.

"She has a great sense of humor, which is really necessary, I think," Glazner said in a phone interview. "She also has that personal connection. ... I think she wishes she knew more about using art when her husband was going through it."

Once a month, Alzheimer's Arkansas, a support organization for people with dementia and their caregivers, hosts a free program called Art Together.

It's a space for those people to socialize through artwork, said Elise Siegler, president of the organization. She's hoping to integrate Hayes' poetry training into Art Together workshops.

"I know this from being a caregiver. There ain't no fun with Alzheimer's," Hayes said. "It's hard to find social places for you to be with your person."

But tapping into "day-to-day joy," often through art, makes the experience bearable, even wonderful, she said.

"I would not wish what happened to Bob and me on anyone, ever," Hayes said. "But I also would not trade that experience for anything on earth.

After her husband's death, Hayes also found respite in randomness.

From Natalie Goldberg's book, Writing Down the Bones: Freeing the Writer Within, she learned about "poetry on demand," the practice of writing poems for people on the spot.

So Hayes gathered a TV tray, two camp chairs and a legal pad, which she eventually swapped out for her jade green Olivetti typewriter, a high school graduation present.

She attended art walks and public library events to chat with passers-by about whatever was on their minds.

Her first "on demand" poem was for two women who met as childhood friends only to fall in love years later.

For a typewriter collector, Hayes wrote: "My typewriter says 40 years / is enough / If it comes by your place / give it a lube / give it some love."

Hayes has concocted poems for strangers on more than 20 occasions. She calls her practice Dogtown Poetry On Demand, "Dogtown" being an old disparaging nickname for North Little Rock that residents now abide and even celebrate.

Her method is to converse with a person, then twist that discussion into short, punchy pieces.

"My poetry, it's not that snooty," Hayes said.

For Hayes, her creative world is opening up.

And when asked if she's an artist, Hayes has begun to answer, emphatically, "Yes." 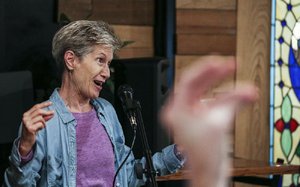