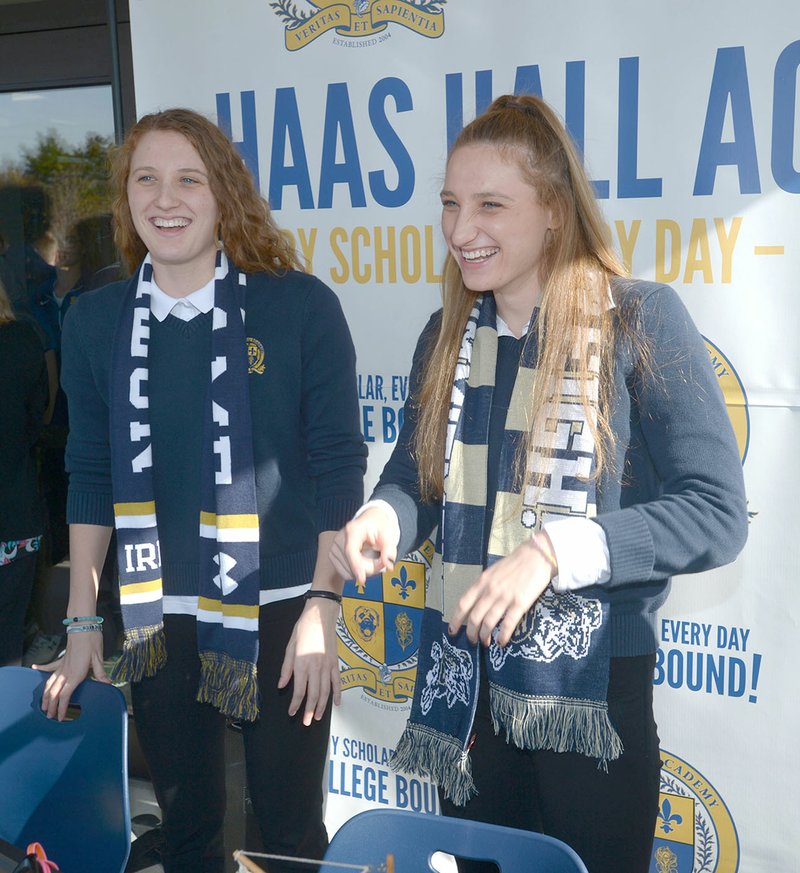 NWA Democrat-Gazette/ANDY SHUPE Haas Hall swimmers Luciana Thomas (left) and her twin sister, Martina Thomas, laugh with friends Friday before signing letters of intent to swim in college at their school in Fayetteville. Luciana signed with Notre Dame and Martina with the Naval Academy.

A signing ceremony was held Friday afternoon at the Haas Hall-Fayetteville campus as classmates, coaches and friends were on hand for the event.

The highly decorated seniors, who led the Haas Hall girls to a state championship last season, are the younger sisters of former Haas Hall swim star Antonio Thomas, who competed in the U.S. Olympic Trials in 2016 in the 1,500 freestyle. Antonio swims collegiately at Missouri State.

"I was looking at a bunch of different schools, both civilian and academies, and I decided to go with the Naval Academy because of the opportunities I can have after," said Martina. "That was an important part of my decision because I wanted to serve in the military."

Martina will have a five-year commitment to the U.S. Navy after she completes her college career, and she has aspirations to be a Navy scuba diver, she said.

"There are a lot of different ways you can do that through the Navy, so I'm not sure which route I will take," she added.

She also considered West Point Military Academy, but said she felt the Naval Academy was a better fit because she wanted to serve on a ship. Martina has already earned her athletic letter of assurance into the academy, but has applied for an appointment to both Arkansas U.S. senators.

Luciana said she chose Notre Dame "because it was the perfect combination of good swimming and good academics."

The state record-holder in the 200 individual medley said she also visited Vilanova, but Notre Dame was her top selection. She visited the South Bend, Ind., campus on an unofficial visit and made an immediate connection with the Fighting Irish coaches.

"They took us around the campus and we met some of the students," she said of the visit. "Everyone made me feel really welcome. The campus is beautiful. They are continuing to build their program and recruiting faster kids."

The sisters have never been apart, and they said they considered attending the same college, but ultimately made the decision to go in different directions.

"We talked about it early on, but we decided to do this separately and chose our own schools," Martina said. "We just felt that each of these were a perfect fit for each of us. But yes, we'll miss each other.

"This is going to be really weird," Luciana added. "I think I will miss her a lot, but I also feel like I will be so busy with everything that right away it won't hit me."

Before the sisters head off to college, they will again have Haas Hall in the hunt to repeat as state champion. Last season Martina won the 200 freestyle and 100 backstroke, and Luciana won the 200 IM and the 100 butterfly. They also both swam legs on the state championship 200 medley and 200 free relays en route to earning all-state honors.

The sisters also said that going to a college away from home is something they both wanted.

"I love Fayetteville, but living here my entire life, I just felt like I wanted to experience something different," Luciana said.