Museum of the Bible 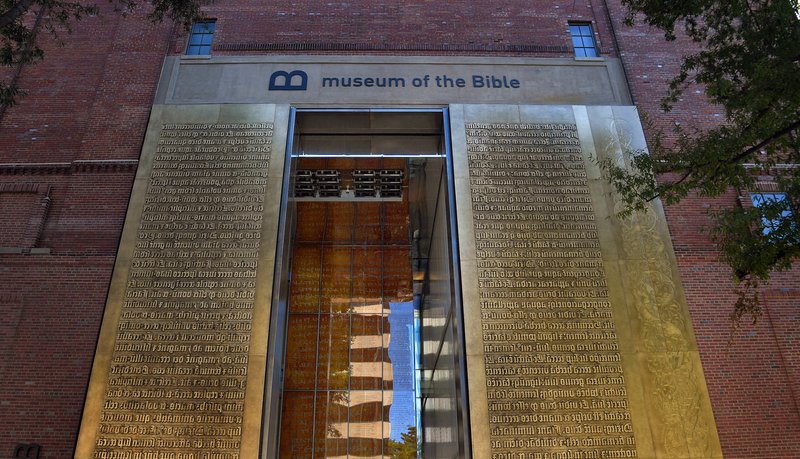 The Washington Post/MICHAEL S. WILLIAMSON The entrance to the Museum of the Bible features relief metal lettering of scriptures in Latin.

WASHINGTON -- The Museum of the Bible, an expansive new institution opening this month just south of the National Mall, is just as notable for what it includes -- vivid walk-through re-creations of the ancient world, one of the world's largest private collections of Torahs, a motion ride that sprays water at you, a garden of Biblical plants -- as for what it leaves out.

The $500 million museum, chaired and largely funded by the conservative Christian family that owns Hobby Lobby, doesn't actually say a word about the Bible's views on sexuality or contraception. The museum doesn't encourage visitors to take the Bible literally, or to believe that the Bible has only one correct form. And in floor after gleaming floor of exhibitions, there's very little Jesus.

This isn't the evangelism that the billionaire Green family first promised a decade ago when they set out to build a museum dedicated to Scripture. At the time, the museum's mission statement promised to "bring to life the living word of God ... to inspire confidence in the absolute authority" of the Bible, the book at the institution's center.

The approach today, while still viewed with skepticism by some scholars, appears to be more modest: "The museum has fence posts -- limits. It doesn't overtly say the Bible is good -- that the Bible is true," said Steve Green, the chief executive officer of Hobby Lobby and the chairman of the museum. "That's not its role. Its role is to present facts and let people make their own decisions."

In this new moment in America, the museum that will open Nov. 17 has a simpler message for the nation, a pitch that seems to have more to do with capturing the attention of a distracted populace than with saving souls. All the museum asks about the Bible: Just try reading it.

The museum, which will be among the largest in a city full of museums, presents broad, sometimes abstract concepts about the Bible, communicated through cutting-edge technology and immersive experiences:

Children's arcade games about "courage." A sensory room with images of animals, minor-key music and creaking boat sounds meant to evoke the "chaos" onboard Noah's Ark (a marked contrast from the Ark Encounter recently opened in Kentucky, which presents a life-size literal vision of Genesis). And many, many examples of the Bible's impact on everything, from calendar systems and fashion to language -- most presented without overt judgment on whether that influence was good or bad.

The point, staff members say, is simply to engage an America that is losing connection with the Bible.

"Our goal isn't to give answers but to arouse curiosity," said Seth Pollinger, a Biblical scholar who is director of the 430,000-square-foot museum's content.

The nonprofit museum's projects also include a high school Bible curriculum organizers hope will be used in schools around the world, and a research arm that invites scholars to study Green's expansive collection of artifacts. Admission to the museum will be free.

Mark Noll, one of the country's most prominent experts on American Christian history, served as an adviser. He compared the Museum of the Bible to the Newseum, another huge private museum.

"Obviously the museum is there to make people think better or think kindly about the effects of Scripture in U.S. history," he said. "But I did think they were trying to be as nonpartisan as they could."

Some remain skeptical of the museum's neutral viewpoint. At the Society of Biblical Literature, the largest association of Biblical scholars, officer Steven Friesen said there's debate in the academic community about whether to do research involving the Greens' collection. He would advise fellow scholars to steer clear.

Friesen hasn't seen the museum yet, but he believes from reading the website that its materials subtly promote a singular version of Scripture; indeed, the museum mostly omits discussion about how the Bible was compiled, and which religious traditions believe which disputed books belong in the Bible. And museum staff say the place for discussing controversial issues such as sexuality and abortion, which aren't mentioned in the exhibits, might be at events hosted at the museum; Friesen thinks those events are meant to draw in influential people to hear the Greens' take on the culture wars.

"My guess is that they've worked very hard at covering what they would like to do, trying to hide the agenda that is behind the museum," he said, defining that agenda as the promotion of their deep faith in the literal truth of the Bible.

Housed in a former design center at Fourth and D streets SW, the museum is built to awe from the first moment, when visitors pass through two 40-foot, 2.5-ton bronze doors showing the text of Genesis 1 -- backward, in Latin. The feeling inside is just as soaring, with much of the interior made of imported Jerusalem Stone.

The museum doesn't try to prove the historical veracity of the Bible, or argue that the Earth is about 6,000 years old as does the Creation Museum in Kentucky. It devotes a display to the Virgin Mary, a Biblical figure whom evangelicals believe has been elevated too highly by Catholics. "Some people are going to walk up and say, 'That's not the Bible,' " Pollinger said about the historic paintings in the museum that depict Mary as a saint.

Jesus is also not central to the museum's presentation of the Biblical story. Visitors walk through a multiroom saga of the Old Testament, and can visit a re-creation of a first-century village in Galilee where actors will tell them what the villagers think of this controversial preacher Jesus. They can watch a movie about John the Baptist. But the story of Jesus' crucifixion and resurrection is almost absent.

The museum opens at a moment of heated conflicts about religion -- from President Donald Trump's comments about athletes kneeling during the national anthem, and the battle between conservative religious rights and LGBT rights, to a host of other issues. Pollinger said many advisers to the museum were motivated by a desire to soothe the super-charged climate around religion in American public life.

The question for the museum and its small army of diverse advisers will be how well it can balance its stated goal of being nonsectarian with the history of its leadership.

Mark DeMoss, a museum board member and prominent evangelical public relations executive, said people just need to get in the door and see for themselves.

"I know no one person or two or three people are responsible for the story of how the Bible is being told in this museum. It's the product of dozens and dozens of people from a wide range of backgrounds," he said. "The fact that it is as broad and ecumenical and nonsectarian as it is, I think there will be criticism from the religious left and the religious right -- which would mean to me that we probably got it just about right." 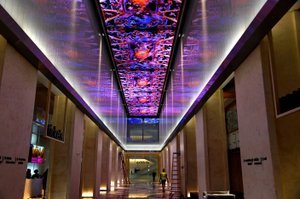 The Washington Post/MICHAEL S. WILLIAMSON The high-tech ceiling in the hallway at the entrance to the Museum of the Bible will feature digital images and movies as well as running scripture verses.

Print Headline: Museum of the Bible