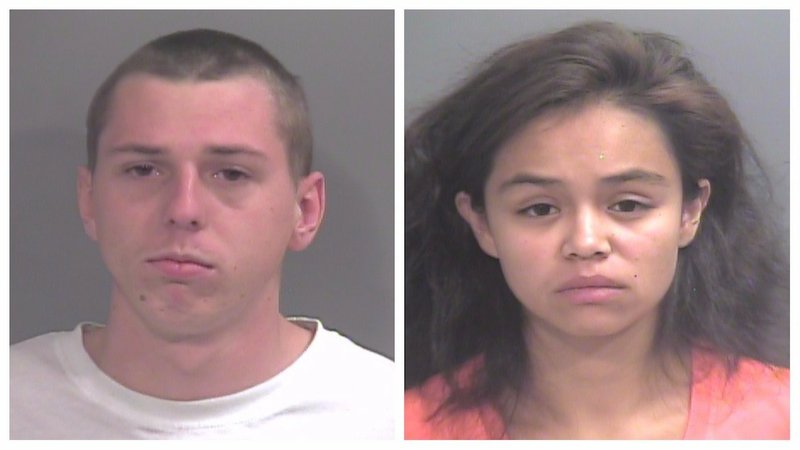 Tyler Hobbs, 21, of Farmington (left) and Maria Giron-Molina, 21, of Decatur

FAYETTEVILLE -- Police arrested a man and woman in connection with the death of a 1-year-old boy at Foxborough Apartments, according to a news release.

A person commits abuse of a corpse if, except as authorized by law, he or she knowingly:

(1) Disinters, removes, dissects, or mutilates a corpse; or

(2) Physically mistreats a corpse in a manner offensive to a person of reasonable sensibilities.

Hobbs called police Monday afternoon and told dispatchers the child fell down the stairs a "few days ago" and started having a seizure, according to a preliminary report.

Hobbs told dispatchers and later to police after the child's fall, he did CPR and the child started breathing, but stopped. Hobbs told police he got scared and didn't know what to do and "called Monday because he wanted to turn himself in," according to the report.

As the call continued, Hobbs said the child died Oct. 15.

Officers arrived about 6 p.m. at Foxborough Apartments, 920 N. Leverett Ave., No. 707. They spoke with Hobbs as well as Giron-Molina, the child's mother. Both are 21 years old.

Officers found the body in an advanced state of decomposition in a plastic container covered with blankets in the closet of the bedroom where the couple slept, according to the report.

Giron-Molina said Hobbs told her the child fell at a park, according to the report.

Noting the inconsistencies in the couple's stories, investigators spoke with Hobbs again, according to the report.

Hobbs then told police he had a headache and the boy was crying uncontrollably. The boy had knocked a picture frame and lamp off a bedside table. Angered at the boy's refusal to calm down, Hobbs said he picked the boy up and covered the child's mouth with his hand to muffle the crying. Hobbs said the child hit and scratched him, so he shook the boy back-and-forth, according to police.

Hobbs told police he was under the influence of marijuana and he blacked out, and when he came to the child wasn't breathing. Hobbs said he did CPR. The initial effort was successful, but ultimately the boy died without receiving medical attention, he told police.

The couple conspired not to contact the police. After two weeks passed, the two were planning to give Giron-Molina's other two children to her family and then contact police. Giron-Molina told police she was afraid of losing custody of her children, according to the report.

Hobbs expressed remorse for his actions and said he didn't intend to harm the child, according to the release.

Misty Steuart is the director of marketing and staff development for Trinity Property Management, which manages Foxborough Apartments.

Giron-Molina signed a lease for the apartment less than 30 days ago and was the only name on the lease, Steuart said. Giron-Molina said she was going to live there with her three children. She passed the standard residency qualifications and had no felony convictions, Steuart said.

Steuart said as far as she knows there hasn't been an incident like this before at the complex.

Hobbs lives at 148 White St. in Farmington, according to the Washington County Detainee information. Giron-Molina's address is listed as 593 E. Roller Ave. in Decatur.

Nick Sperduto sat on the steps of his Foxborough apartment Tuesday afternoon as his young son played in the dirt. He said the news of what happened made him evaluate what he and others can do to be a little bit safer. He said he makes a point to say hello and get to know his neighbors, especially those who have children his son might play with, but he never really saw anyone from apartment 707. It was almost like no one lived there, he said.

"I look at him (his son) and think, 'how could someone do something like that to a little kid?' I don't understand," Sperduto said. "It's scary."

Steuart said in regards to concerns from other residents, "We will be assessing the situation with the VP of property management."

The child's body is being sent to the Arkansas State Crime Lab to determine cause of death.