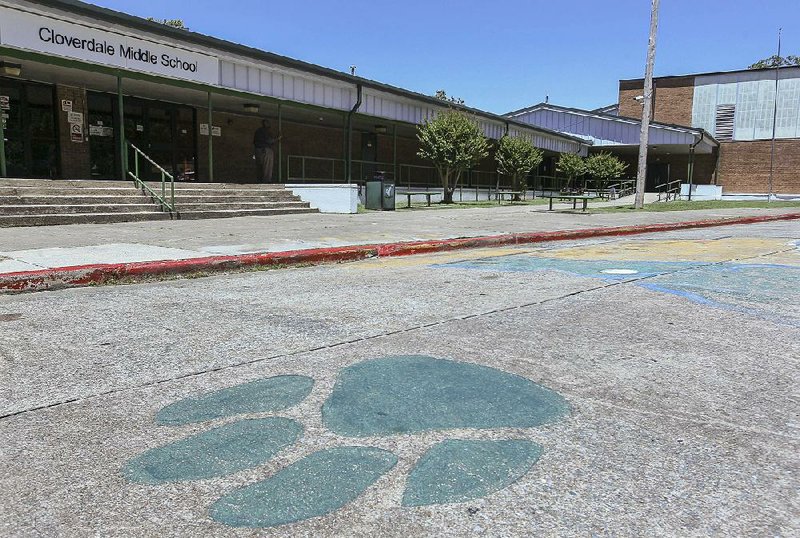 Cloverdale Middle School is in disrepair, with exterior walls that are failing, according to a lawsuit accusing the Little Rock School District of racial discrimination in regard to the condition of campus buildings. The school serves a large number of students from minority groups.

Building conditions in the Little Rock School District were a big factor in the district's special tax election earlier this month, and they will come to the forefront again in a federal court trial scheduled to start July 18.

U.S. District Judge D. Price Marshall Jr. will preside in the trial of a lawsuit filed in 2015 by a group of Little Rock district families who are black and by two displaced Little Rock School Board members. The defendants are Little Rock Superintendent Mike Poore and Arkansas Education Commissioner Johnny Key. Key acts in place of a Little Rock school board and is Poore's supervisor in the state-controlled 24,000-student school district.

The trial comes in the wake of district voters soundly rejecting at a May 9 election a proposal to extend the levy of 12.4 property tax mills from 2033, when they are due to expire, to 2047. District leaders had proposed extending the debt service mills as a way to finance $202 million in bond issues, $160 million of which was earmarked to pay for part of the construction of a new $90 million high school in southwest Little Rock, plus improvements, repairs and updates at all other district campuses.

The parent and student plaintiffs in the pending lawsuit -- some of whom initially used the name of Doe instead of their real names -- are represented by a team of attorneys that includes state Rep. John W. Walker, D-Little Rock, and Robert Pressman of Lexington, Mass., as well as Shawn Childs and Austin Porter.

The plaintiffs challenged both the Jan. 28, 2015, state takeover of the school district and what they said are disparate school-building and academic services in the state's largest district.

Last year, Marshall dismissed the legal challenge to the state takeover that had resulted in the dismissal of the district's elected School Board, including Doe-case plaintiffs Jim Ross and Joy Springer. The takeover occurred because six of the district's 48 schools were state-labeled as academically distressed because of chronically low student achievement on state required tests. The number of schools in distress has since been reduced to three.

The state takeover issue is likely to be appealed later to a higher court, Walker said Friday.

The remaining issues in the case for trial in July are the allegations of racial discrimination in regard to the condition of campus buildings and in academic program offerings, school attendance zones, school staffing and discipline practices.

Central to the legal arguments by the Doe plaintiffs are the district's new Pinnacle View Middle and Dr. Don R. Roberts Elementary schools in northwest Little Rock, and Cloverdale Middle and McClellan High schools. Cloverdale and McClellan are much older campuses in the southwest part of the city, and they serve larger percentages of minority-group and low-income students than do schools in the district's northwest sector.

White students are favored in the district, the Doe attorneys contend.

"Plaintiffs claim that LRSD has allocated high-quality educational resources and top-end facilities to disproportionately white student populations in an effort to privilege, recruit and retain white students," a recent legal brief filed by the Doe team of attorneys stated.

They added that there is a "racially discriminatory impact on Plaintiffs, who are all black".

"The student plaintiffs, and their parents on their behalf, assert their Fourteenth Amendment Equal Protection Clause right to be educated in 'a system of public education freed of racial discrimination,'" the Doe attorneys also wrote, quoting from the 1954 Brown v. Board of Education U.S. Supreme Court decision, arising from a Topeka, Kan., case, that declared laws establishing racially separate schools to be illegal.

The plaintiffs are asking for a court order that would put the brakes on Pinnacle View Middle School -- which is opened now to sixth-graders but is being prepared for sixth through eighth grades. The plaintiffs are also asking for a court approved "constitutionally adequate facilities plan for the LRSD," and a stop to "unconstitutional policies and practices" in other areas of the district's operation, including the school attendance zones.

"This relief will ensure Plaintiffs have just as much of a chance to succeed academically as their white counterparts," the Doe attorneys told Marshall in a recent court filing.

Poore, the superintendent, is defended in the lawsuit by Chris Heller and Khayyam Eddings of the Friday, Eldredge & Clark law firm, which represented the district in an earlier federal school desegregation lawsuit. That now 34-year-old suit -- also involving the Pulaski County Special and North Little Rock school systems, the state and black students known as the Joshua intervenors -- is ongoing, but the Little Rock district is no longer an active party. Marshall is the presiding judge in both cases.

Key is represented in the Doe lawsuit by staff in the Arkansas attorney general's office.

Attorneys for Little Rock district and state education leaders are asking Marshall for a summary judgment against the plaintiffs, which if granted would eliminate the need to hold the July trial.

"Facts? Proof? Plaintiffs were required to come forward with specific facts showing that LRSD has engaged in systemic, intentional race discrimination," attorneys for the Little Rock district wrote to the judge last week in response to the Doe charges of unconstitutional practices.

"They were required to produce specific facts showing that LRSD's leaders chose a discriminatory course of action at least in part because of, not merely in spite of, its adverse effects on ... African-American children," the school district attorneys continued. "They were required to prove that race discrimination is the policy or custom of the school board. They haven't done it."

Heller and Eddings cited an earlier legal decision that concluded that "discriminatory effects alone are not sufficient to show discriminatory intentions."

The school district attorneys told to the judge that the plaintiffs based their arguments on court decisions from the 1970s that arose from highly segregated school districts. The Little Rock district has no virtually one-race schools, they wrote, arguing that those older cases are factually and legally dissimilar to the current case.

Pinnacle View Middle School, 5701Ranch Road, for example, had 222 students in this just-ending school year, 91 of whom were white, or 41 percent. The district overall is about 18 percent white and 65 percent black, with the remaining 17 percent being made up of students who are of Hispanic and Asian descent or are of more than one race.

"Plaintiffs may not attend Roberts or Pinnacle view but other African-American students do and Plaintiffs have not shown that those schools were created for the purpose of harming, rather than helping, African-American and other students in LRSD," the Rock district's attorneys wrote.

The Doe lawyers argued to the judge that the Little Rock district has made Pinnacle View Middle School a priority over the southwest Little Rock high school project "in an attempt to privilege, recruit and retain white students." They contend that the southwest school, which is still planned to replace McClellan and J.A. Fair high schools, and Pinnacle View were to be built simultaneously -- with one waiting on the other if one had construction delays.

The middle school moved ahead when the district was able to purchase the former Leisure Arts office building and warehouse for the middle school. Meanwhile, ground has not yet been broken on district-purchased property for the new high school, which has been sidelined in part because of budgetary matters, the attorneys said. They noted that the district had expended $380,528 on the southwest school project and $34 million on Pinnacle View.

At trial, the Doe plaintiffs will rely in part on the findings of their consultant, John Poros, associate professor in the School of Architecture at Mississippi State University. Poros found that the Little Rock schools with the highest white student populations are provided higher-quality facilities than the secondary schools with the lowest white populations.

Pinnacle View Middle School and Forest Heights STEM Academy for kindergarten through eighth grades were in "excellent" and "very good" conditions, attorneys quoted from Poros' reports. Henderson Middle, which has a largely black student population, was "in need of massive renovation" and Cloverdale Middle was "the worst," with exterior walls that are failing. Central High was deemed "very well maintained," while a good part of McCellan High "should be removed and replaced," plaintiff attorneys quoted Poros as saying. Henderson, Cloverdale and McClellan have very few white students as compared with Central, Pinnacle and Forest Heights.

"We feel these plaintiffs are being mistreated, as all black kids are, by the policies of Mr. Key and the school district," Walker said Friday. "We believe it is due to their low status and their race."

Walker said the plaintiffs' list of potential witnesses to testify in what is currently set to be a four-day trial will be former Superintendents Baker Kurrus and Morris Holmes.

The district's attorneys also argued that nearly every allegation of race discrimination made by the plaintiffs occurred or persisted during the multiple years that the Little Rock district was led by a majority-black school board and a black superintendent. They also said the plaintiffs failed to produce evidence to support their claims that the black leaders were motivated by racism.

The Little Rock district attorney's took exception to the plaintiffs' using Kurrus' call for a racially diverse district as evidence of efforts to benefit white students.

"In a world where schools in which African-American students are in the majority can be seen as existing to 'privilege' white students, it may make sense to argue that a desire to achieve racial diversity is evidence of race discrimination," the Little Rock district attorneys wrote, and then quoted a line from Lewis Carroll's Through the Looking Glass: "'When I use a word,' Humpty Dumpty said in a rather scornful tone, 'it means just what I choose it to mean -- neither more or less.'"

"In reality, however, nothing about Mr. Kurrus' desire to 'build coalitions across racial lines in order to achieve a racially diverse school district' is evidence of an intent to discriminate against African American students," Heller and Eddings wrote. 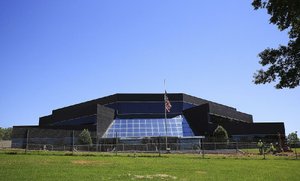