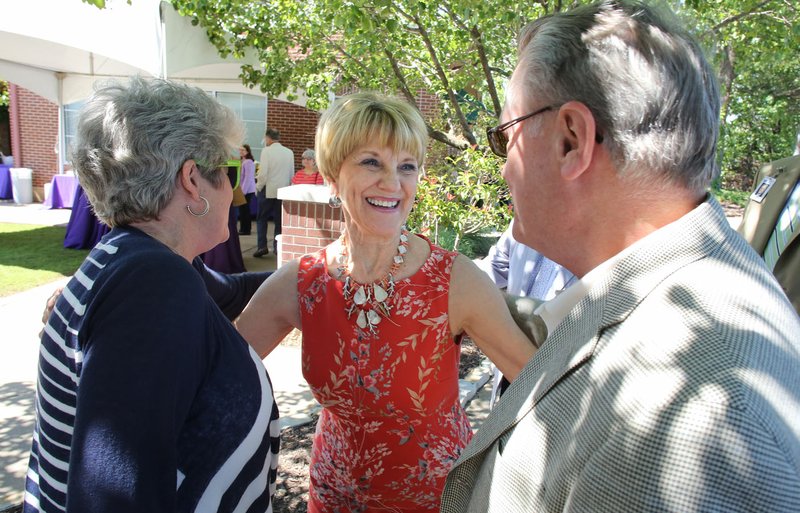 NWA Democrat-Gazette/DAVID GOTTSCHALK Barbara Prichard (center), director of Gifted and Talented and Advanced Placement for Fayetteville Public Schools, is greeted Thursday by Jane (left) and David Gearhart, former chancellor for the University of Arkansas, at a reception in the courtyard of the McClinton Administration Building in Fayetteville. Prichard is retiring after 34 years in education.

Four retiring education leaders in Northwest Arkansas have helped shape gifted and talented education since it was introduced to the state. 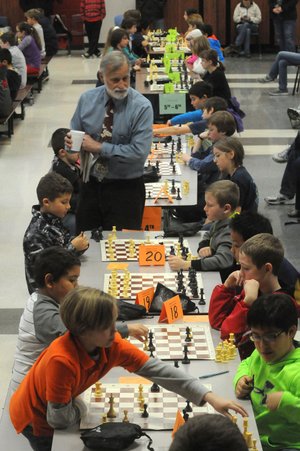 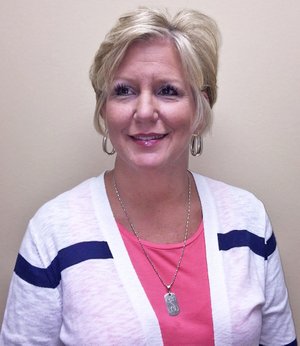 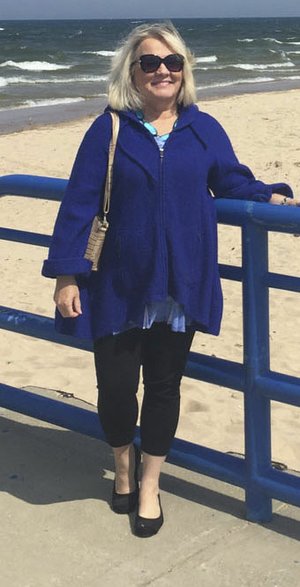 Education for gifted and talented students drew them in when it was an emerging field in the early 1980s in Arkansas.

• Retiring after 31½ years in education

• Retiring after 42 years in education

• Serves on Academic Assembly Council for the College Board

• Legislative committee co-chairwoman for Arkansans for Gifted and Talented Education

• Charter member, past president and former board member for Arkansas Association for Gifted Education Administrators

• Retiring after 37 years in education

• Began education career in Michigan in 1974. Taught for seven years in Oark and 21 years in Fayetteville, including 18 years in gifted education.

• Retiring after 33 years in education

Among those retiring is Sandra Johnson, gifted and talented education specialist at the Ozarks Unlimited Education Service Cooperative in Harrison. She grew up in Louisiana as a student in a developing gifted program.

"All four are long-term providers of services to gifted students and were instrumental in the early years of the development of programs and services to students in Northwest Arkansas," said Mary Kathryn Stein, the Arkansas Department of Education's director of gifted and talented and Advanced Placement. "Their efforts and examples have been shared throughout the state."

She described the four outgoing Northwest Arkansas educators as advocates for gifted education in their districts and in various leadership roles in state organizations. Vanderspikken is a past president of Arkansans for Gifted and Talented Education. Prichard and Johnson are former presidents of Arkansas Association for Gifted Education Administrators.

"They have demonstrated their love for service to gifted students in so many ways that they have been the recipients of numerous awards and accolades from these groups, as well as their local school districts and education service centers through the years," Stein said.

"It will be impossible to replace them in the field of gifted education in Arkansas, but their influence will be felt far into the future."

The majority of her teaching experience in gifted education was in Bergman.

"People tend to think that gifted kids will just get it on their own, that they don't need the support," Johnson said. "The saddest thing I have experienced is gifted students who weren't challenged enough to stay in school."

Johnson, who has been an educator for 31½ years, said she remembers with regret one gifted third-grader who later dropped out of school. He was advanced academically, but socially immature. She remembers him bringing Matchbox cars and Tom Clancy's novel The Hunt for Red October to recess. If he couldn't find a peer group to play with, he would read.

Johnson, as a gifted coordinator, worked to advocate for his needs, but an educator for gifted students -- often the only one employed in smaller rural school districts -- cannot alone meet all academic needs in all subjects for gifted children.

Strong gifted programs provide layers of services and options, Johnson said. They have open-door referral policies and actively work to identify the 5 percent to 10 percent of children who are gifted. All educators need to know about the traits and needs of gifted children and how to respond to those needs, she said.

"Our gifted kids come to school with such a desire to learn," Johnson said. "When they spend years not being challenged it has a damaging effect. Our gifted kids can be the most harmed in our districts if not provided with strong, good growth."

Prichard, 71, earned a minor in special education while obtaining her bachelor's degree in elementary education at the University of Kansas. As part of her minor, she took a graduate course in gifted and talented education. She learned about the research on how underserved gifted children were in schools, she said.

"There were children languishing in classrooms," she said. "There are students who have been left behind and forgotten."

Gifted children have distinguishable characteristics that require different kinds of instruction, Prichard said. Characteristics include being unusually curious, having a large vocabulary compared with children of the same age, sustained interest in one or more fields, concern about world problems, a tendency to question the status quo and the ability to reason abstractly.

Gifted children have specific educational needs as would any other student with a special need, such as those with a learning disability or those with a physical impairment, she said.

"There are all kinds of needs we look for in children," Prichard said.

Arkansas has been a national leader in gifted education because Act 445 of 1983 mandated school districts identify gifted children and provide programs for them, she said. The requirement comes with funding, she said.

"The funded mandate is important so we're not taking money away from some other areas administrators might be more interested in," Prichard said.

Prichard was the first director of gifted and talented programs for Fayetteville School District. The district hired her in 1983 to work with a committee that studied research on what constituted a good program for gifted children. She came to the district with experience as a gifted teacher who helped establish a program in Fayetteville, N.C. She moved to Fayetteville, Ark., in 1982 when her husband became an assistant professor of military science at the University of Arkansas.

Fayetteville received recognition in the early 2000s from the National Association for Gifted Children for having exemplary processes for program evaluation and for its identification of students.

All children in Fayetteville are identified for gifted programs based on information collected from 11 to 13 pieces of data, depending on the grade level, from academic achievement assessments and evaluations on different types of thinking, including creativity, Prichard said.

A placement committee of at least five people decides whether a child should be in a gifted program. Prichard sits on every committee. Parents may refer children, but they are not on the committee.

Gifted education is neither a club nor a reward for good grades and good behavior, Prichard said.

Bright children perform well when taught, she said. In some cases, a gifted child is one with test data showing he's brilliant even though he acts out in class, Prichard said. The misbehavior can occur when gifted children aren't being challenged.

Gifted children deserve the opportunity to be challenged and to learn something new, she said.

Driver, 66, was among the early gifted education teachers in Fayetteville School District, a focus of his for 18 years before he left the district in 2008 after taking a voluntary buyout. He now is retiring after six years as the gifted and talented education specialist for the Northwest Arkansas Education Service Cooperative in Farmington.

He also organized regional academic competitions, including in chess and Quiz Bowl.

Fayetteville's program developed because of the work of Prichard and the gifted teachers under her supervision, Driver said. Not all states require gifted education, and even fewer states provide money. The Arkansas Department of Education supervises programs in districts.

A national report in 2015 found at least 32 states mandated gifted education in 2014-15 and 27 provided money. The report was based on surveys of states for the National Association for Gifted Children and the Council of State Directors of Programs for the Gifted.

Critics of gifted education will say all children are gifted, Driver said. Some teachers didn't like students in gifted programs leaving their classrooms.

"It was a constant battle," Driver said. "There was always pushback; it was hard."

The Fayetteville identification system allowed the district to find children who were academically different from their peers, he said. Gifted teachers wrote curriculum and units for the students who came to see them three hours each week.

Units involved problems requiring students to use a higher level of thinking, Driver said. One unit Driver taught took students on a six-month study of architecture. Students had to learn to draw to scale, to design and build an original model of a structure and to use foam core to create palaces, barns and office buildings.

"It was challenging, stimulating and fast-paced," Driver said. "We gave them assignments that made them use their brains appropriately."

Vanderspikken, 65, encourages the 22 gifted teachers in Springdale School District to be compassionate toward gifted education students, to have a vision, to push beyond what the teachers think they can do and to set big goals.

One strategy used in Springdale to identify students involves gifted teachers at the elementary level going into kindergarten and first-grade classrooms to interact with all students, Vanderspikken said.

In the late 1980s, two teachers wrote a study unit for first-graders tying in concepts of goods and services and going to the rodeo, she said. That unit grew into a two-day event for all first-graders in Springdale every spring. It's the Stick Horse Rodeo.

Students go to the rodeo grounds in Springdale, see agricultural goods and services, learn about tourism and some of the basics of economics, Vanderspikken said.

The teachers use the lessons to observe students for characteristics, such as the whether they ask and answer lots of questions, have the ability to elaborate or demonstrate creative and different thinking with the stick horses they create.

Vanderspikken spent is first six years of his 33-year career with the Springdale School District as a classroom teacher. The rest of her time was teaching gifted education at Walker Elementary School and Southwest Junior High School.

"I had a professor who interested me in it," Vanderspikken said. "It was a new topic of interest. It was fortuitous."

The early years of overseeing the district's gifted education program involved a typewriter and a book of standards. Computers and web-based programs made the work more efficient. The district's program has grown to 2,000 students and offers a variety of options, especially for students in junior high and high school.

Vanderspikken's job has been to continue to teach administrators, teachers entering the field, parents and state policymakers about gifted children, she said. They tend to have great empathy for others and develop concern over issues, such as poverty. They can become frustrated when their instructional needs are not being met.

Three weeks ago she went to an advanced math class at a secondary school in the district, she said. She heard the teacher comment that a student wasn't feeling well because she had her head on her desk. The student was not volunteering to share her thinking on a math problem with her peers.

Vanderspikken noticed the student had her head down because she was reading a big book about Greek mythology. The student had finished her math work early.

"She's bored," Vanderspikken said. "That is why you need to advance those students. Students are at all different levels. Her focus was on math. She was ready to move on."