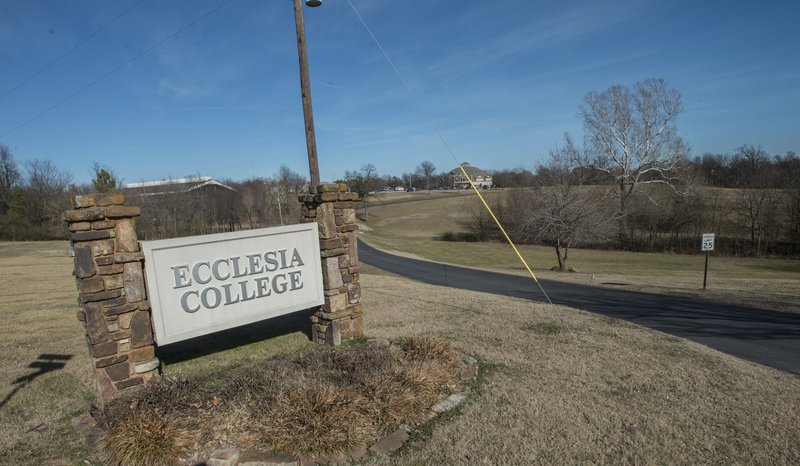 FAYETTEVILLE -- Plaintiff attorneys have upped the ante in a Freedom of Information Act lawsuit over documents embattled Ecclesia College is refusing to release.

Travis Story, attorney for Ecclesia, in a renewed motion to dismiss filed late last week, contended the documents sought by Jim Parsons, a former teacher and board member at the college, can't be released because they are covered in a protective order issued by a federal judge hearing the corruption case of former state Sen. Jonathan Woods, Ecclesia President Oren Paris III and Randall Shelton Jr. Former state Rep. Micah Neal has already pleaded guilty for his role.

A term subject to different usages. It can refer to followers of a religion, viewed as a community. It can also refer to specific institutions, either a local congregation or a national or international body. It can also be used to refer to the building where those who profess a religion gather for worship. Neither the state or federal government may enact laws which aid one or all religions, or give a preference to one religion over another. Separation of church and state is a concept based in the Establishment Clause, found in the First Amendment of the U.S. Constitution.

The lawsuit says only documents related to public money used at the college are being sought.

In the latest amended complaint filed Wednesday, Joey McCutchen, an attorney for Parsons, contends Ecclesia's claim last week to be a church rather than a college puts Ecclesia in violation of the state Constitution.

McCutchen claims giving state grant fund money to a church violates the Arkansas Constitutional prohibition on compelling residents to "support any place of worship," and also gives "preference ... to any religious establishment." The amended complaint alleges Ecclesia committed a fraud in the application process by representing itself as a college rather than as a church.

The amended complaint asks a judge to order Ecclesia to repay grant money it was given, based upon the co-application of Woods and Neal, in the amount of $200,000. The complaint alleges the application for the money was fraudulent because it didn't reveal the true intended use of the money, much of which McCutchen claims was intended to be paid as a kickback to Neal and Woods.

McCutchen filed a separate motion Wednesday seeking to disqualify Story and his law firm from the state case. McCutchen alleges state Rep. Bob Ballinger, R-District 97, a lawyer practicing in Story's law firm, was a sponsor of two separate grants given to Ecclesia.

The motion alleges Ballinger and other state senators and representatives were joint applicants for the grant money given to Ecclesia and could be called as witnesses about those applications.

"All of those state representatives and senators involved in the application and recommendation process are necessary witnesses to testify about whether they knew that they were obtaining funds for a church," according to the motion. "This is because, if the defendant is a church and holds itself out as a college, it is committing a fraud and committed a fraud upon the taxpayers. Plaintiff intends to call Mr. Ballinger about this very issue and he is now a necessary witness."

McCutchen claims Arkansas Rules of Professional Responsibility require the disqualification of Story and other members of his firm because Ballinger is a witness.

Paris and Shelton, a consultant, also have been indicted on 13 counts of wire fraud each and one count of mail fraud. Both have pleaded not guilty.