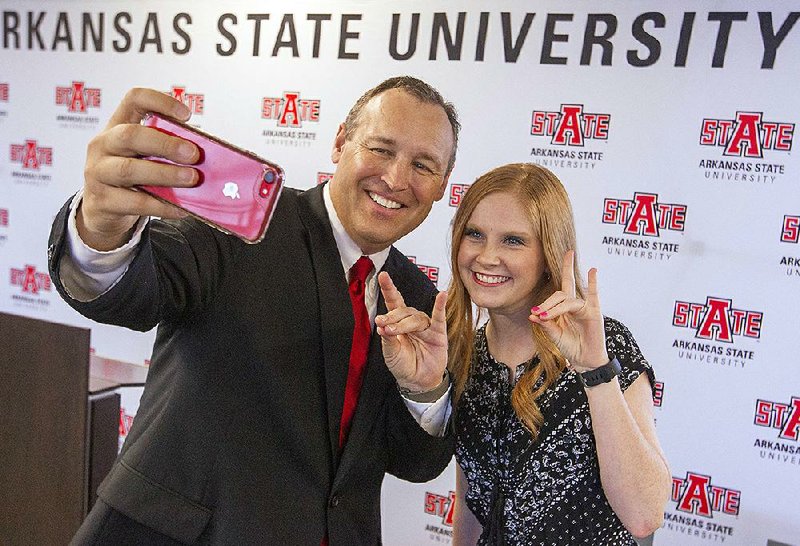 JONESBORO -- Kelly Damphousse was seconds away from deleting the email that stands to change his career.

As the dean of the College of Arts and Sciences at the University of Oklahoma, Damphousse received many emails from "headhunters," or recruiting services for college administrator jobs. And he routinely deleted them. He was "incredibly happy" in Oklahoma, where he was learning from longtime President David Boren.

The personal touch caught Damphousse's eye. He applied for the job a day later and visited the Jonesboro campus a week later.

"He convinced me A-State would be a great place to be," said Damphousse, who on Wednesday was put forward as the new ASU chancellor.

A 20-member search committee unanimously supported Damphousse after poring over resumes of 60 applicants and selecting three finalists. The two other candidates were Ronald Elsenbaumer, interim provost and vice president for academic affairs at the University of Texas at Arlington; and Alan Shao, dean of the school of business at The College of Charleston in Charleston, S.C.

Welch ultimately recommended to ASU's board of trustees the hiring of Damphousse, 54. Pending board approval -- the body meets June 8 in Newport -- Damphousse will start as chancellor July 1 and earn $360,000 a year in public and private funds. He would also receive $100,000 in a "longevity incentive payment" if he were to remain the chancellor through July 1, 2022, according to his offer letter.

He would receive $40,000 in deferred compensation starting July 1, 2018, and for each year of the contract, according to the offer letter. Those funds would be paid privately.

As part of the job, Damphousse would have a university vehicle, paid membership initiation and monthly fees to two country clubs in Jonesboro, and use of the chancellor's home at 1503 E. Nettleton Ave. As a faculty-in-residence, he and his wife, Beth, currently live in freshman dormitories on the Oklahoma campus.

If approved, Damphousse will join ASU as the state gears up to change how it funds public colleges and universities, basing funding on student success rather than largely on enrollment. The university has the third-highest retention rates among its Arkansas four-year public university peers, behind only the University of Arkansas, Fayetteville, and the University of Central Arkansas, data show.

Damphousse listed improving retention and graduation rates as one of his top priorities.

"That's job No. 1," he said. "We work so hard to bring our students to A-State. We want them to come back in their sophomore year, and we want them to graduate in four or five or six years if necessary."

But his very first step would be moving to Jonesboro, he said.

"Second step: find a church. Third step: find Wal-Mart," he said. "And then, after that, first day on the job will be Monday, July 3 ... but the first thing I will do is to start building relationships with our faculty and our staff."

He added: "I want the trust of the faculty." He said: "They need to believe that I want to know what their needs are."

"This process has been up and down," McDaniel said. "I am confident [Damphousse] is going to be the person that continues to have this ship going in the direction it needs to go."

The search committee voted unanimously for Damphousse, Welch said in introducing him at an event in the Fowler Center on the Jonesboro campus.

"I have never seen that in a search that I've done," Welch said of the 20-0 vote in favor of Damphousse. "It reinforces this was the right person ... to lead our university."

Damphousse stands to replace Doug Whitlock, who was interim chancellor for a year.

Whitlock was named chancellor after Tim Hudson resigned without a severance package in August after state and internal ASU System audits reported nepotism and conflicts of interest.

Tim Hudson received free trips abroad and allocated student-assistance money to a company for which he once served on its board, according to the audits. Subsequent investigations also found that Hudson tried to use his status as chancellor to ensure that his daughter had more money from colleges.

Damphousse, if approved, will become the third noninterim ASU chancellor since the position was created in 2010.

He was born in a small fishing village in northern Alberta, Canada. Damphousse's adopted parents -- his father finished high school and his mother finished ninth grade -- taught him the importance of serving other people, he said. When he was young, he wanted to be either a Royal Canadian Mounted Police officer or a goalie in the National Hockey League.

His cousin, Vincent Damphousse, played in the hockey league for 18 seasons and was a member of the 1992-93 Montreal Canadiens team that defeated the Los Angeles Kings in five games to win the Stanley Cup.

"My mom early on knew that education was the way out of the life that we were in," he said. "We lived in a trailer court. Now, we didn't know we were poor. ... My mom convinced me to go to college, which wasn't my goal."

At 19, he earned an associate degree in law enforcement at Lethbridge Community College in Alberta in 1982, and later worked in construction and then became a prison guard in the Alberta Correctional Services.

Working in a prison wasn't a good fit.

"Damphousse, having you come to work is like having two good men out sick," one of his evaluations at the prison noted, according to Damphousse's biography on the University of Oklahoma's website.

One of his former professors persuaded him to go to Texas, get a degree and return to Canada to become a Mountie. He got his degree but never went back.

In 1985, he attended Sam Houston State University in Huntsville, Texas, specializing in law enforcement and police science. While there, he met his wife, Beth.

Beth Damphousse's father, a professor at Texas A&M University, saw something in his son-in-law and "walked [his] papers around." Kelly Damphousse was accepted into the College Station university, where he earned his master's and doctoral degrees.

The rise from dean to chancellor is part of an increasing trend in higher education, according to an April report by the Deloitte's Center for Higher Education Excellence and the Georgia Institute of Technology's Center for 21st Century Universities. The groups reviewed 840 college presidents' resumes and found that many went straight from dean to president or chancellor, skipping the middle ground -- the provost's post.

An ASU administrator had reached out to his counterpart in Oklahoma to ask about Damphousse. The counterpart said he had two words: "search over." If Kelly Damphousse wants the job, ASU's search would be over, the counterpart later told Welch.

"Fortunately today, it is over, and he is our next chancellor of Arkansas State University: Dr. Kelly Damphousse," Welch said Wednesday in Little Rock.

Welch called Damphousse's wife a "major piece of that puzzle," when referring to Damphousse's qualifications as chancellor.

"She made it very clear she wanted to help with recruiting and with students," Welch said of Beth Damphousse.

"[She said] 'I don't want a job, I don't want to be paid,'" he said, sticking both thumbs up in reference to Hudson's issues and drawing a laugh from the 150 who attended the announcement.

He added: "We hit a home run with this. I can unequivocally say our best days are ahead of us with Kelly."

Damphousse's bonding with students was impressive, said Haley Stotts, an ASU senior from Little Rock who served on the chancellor's search committee.

"Compared to the other candidates, he stood out," said Stotts, 20, the ASU Student Government Association president. "I loved that he lived on campus. We really got to know [Damphousse and his wife] as people.

"I think he will really care about the students as individuals."

Chucki Bradbury, a member of the search committee and a trustee emeritus, said the selling point for her was Damphousse's final interview. He started talking about his day on campus, at first complimenting the community. Then he told the committee of the "sadness he had felt" from the many who told him they wanted the campus to come together and go forward, that ASU was poised for greatness but it needed a leader to get there, Bradbury said.

"Bodies became alert around the table. Everyone tuned in," she said. "One and a half hours later at the conclusion of the interview process, the entire committee -- never seen this happen -- rose to their feet and clapped for Dr. Damphousse. No one wanted to leave the room.

"We had found our leader." 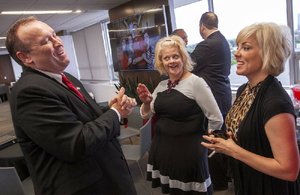