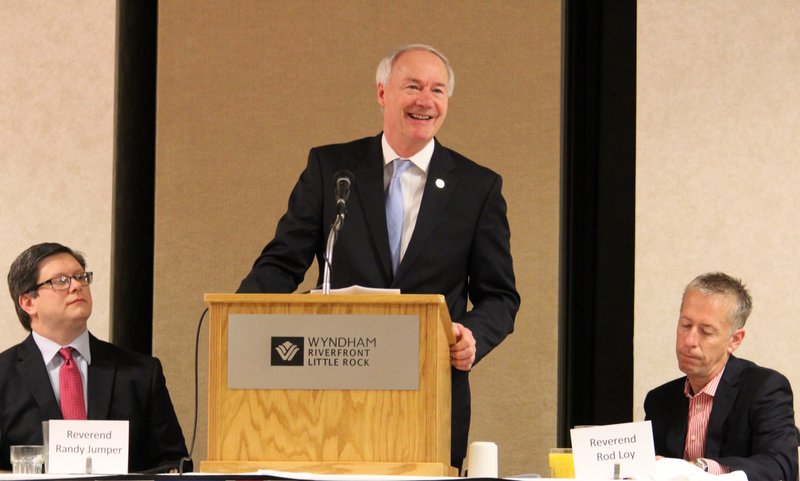 Gov. Asa Hutchinson is shown in this photo. - Photo by Emma Pettit

Gov. Asa Hutchinson announced Tuesday -- four months after his first campaign fundraiser -- that he plans to seek re-election next year and said he wants to continue cutting state income taxes and creating jobs in a second four-year term.

He has no announced opponent yet.

The Republican governor made his announcement in a news release issued by his campaign.

Hutchinson held a fundraiser at the Capital Hotel in Little Rock in January in advance of this year's regular legislative session. He reported more than $690,000 in his campaign treasury at the end of March in his latest campaign finance report. The filing period for state and federal offices will be Feb. 22-March 1 at the state Capitol in Little Rock.

"You can never take it for granted," Hutchinson said of his re-election bid in a telephone interview. "You have to earn it and I expect I'll have to earn it in a competitive environment."

He said he would provide details next year about his agenda for a second term.

"We have a lot we want to work on and that includes tax reform efforts, transformation of state government, and reform of Medicaid," Hutchinson said. He said he also wants to continue working to make government more efficient and on his computer coding initiative.

Hutchinson said he wants to talk about his accomplishments at this point.

"When I ran in 2014, I outlined specifically what I would do as governor; promises that I made and kept. I am running for re-election to expand on our progress from pro-growth tax reform to marketing our state to the world to create more jobs here at home," Hutchinson said in his news release.

Hutchinson said he promised to be a jobs governor; nearly 60,000 new jobs have been created in Arkansas since he became governor, and the state has the lowest unemployment rate in recorded history. He said he promised that computer coding would be taught in every public high school in Arkansas; he championed legislation to do that in 2015, and the number of students enrolled continues to grow in these courses.

This year, the Legislature enacted Hutchinson's plan to cut individual income tax rates for Arkansans with taxable income below $21,000, effective Jan. 1, 2019. That's projected to cut general revenue by $25 million in fiscal 2019 and $50 million a year thereafter.

Hutchinson said a hiring freeze policy he implemented eliminated about 1,400 positions with savings of about $40 million.

Earlier this month, the Republican-dominated Legislature enacted the governor's plan to ask the administration of President Donald Trump for a waiver to shift about 60,000 of the more than 300,000 Arkansans receiving private health insurance through the Medicaid expansion called Arkansas Works to the state's health insurance exchange and impose a work requirement on many participants in the program.

Asked if shifting people off of Arkansas Works would be the first step toward dismantling the state's Medicaid expansion, Hutchinson replied, "Absolutely not." He said he views the change as creating long-term stability for the program and making it more affordable for the state.

The Republican brand "has been damaged" across the nation and people are ready for change, Gray said. "A lot can happen between now and the election."