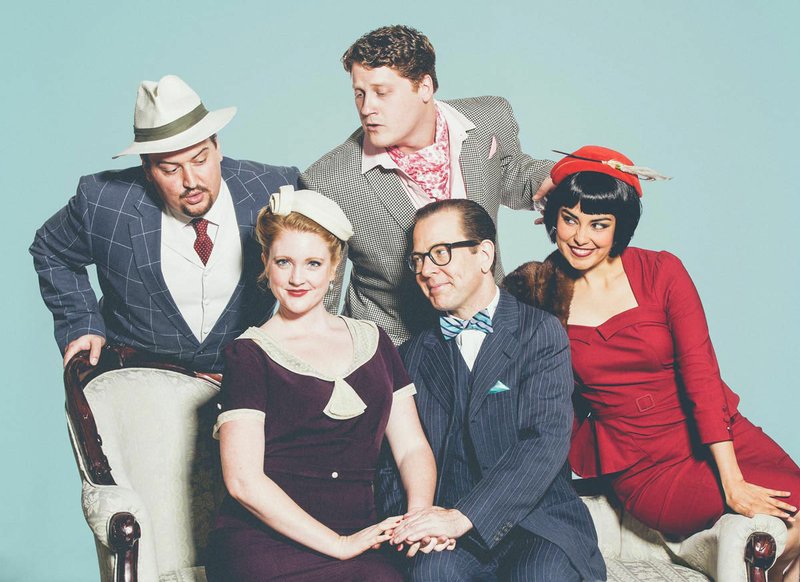 All of these describe TheatreSquared's "The Dingdong," now receiving a full production at T2 after having been polished and workshopped at the company's 2015 Arkansas New Play Festival. The show was adapted from Georges Feydeau's 1896 French farce "Le Dindon" by actor/director/writer and frequent T2 collaborator Mark Shanahan, and was a product of Shanahan's disappointment at too little Feydeau being produced. Theater companies often cite the large cast requirements as a roadblock, so Shanahan's adaptation uses five actors to play 13 different characters.

WHERE — TheatreSquared at the Nadine Baum Studios in Fayetteville

"With this show, we knew we needed actors who had great comic timing and who could carve out really distinct characters," says director and T2 co-founder Morgan Hicks. "It's a complicated plot, so the actors need to be able to carry the journey of each of their roles, to stay connected to what they want and what is standing in their way. The comedy is broad but still needs to be rooted in reality, so you need good comedic actors who are able to make strong choices. I think we've assembled a stellar cast."

The play is set in 1930s Paris and opens in the home of a wealthy lawyer, Vatelin, and his wife, Lucy. At the top of the play, Lucy arrives home, breathless, after fleeing through the streets from a lecherous suitor. The play spirals out of control from Lucy's entrance on as multiple characters -- all with their own, suspect agendas -- turn Lucy and Vatelin's not-quite-faithful marriage upside down.

"For me, this show is a whirlwind," says Shannon Leigh Webber, who plays Lucy (and two other characters). "It's nonstop action from beginning to end. Farce demands more from you than other forms of theater, and that's why I love it so much. You're constantly on your toes, zero downtime. It's exhilarating. I like to compare it to a high-paced musical. We haven't exactly been dancing and singing all night, but by the end of the show, it feels like we have."

Hicks says that directing a farce comes with its own unique challenges.

"You have a lot of what I like to call the 'math' of the play," says Hicks. Actors rush on and off stage multiple times in a single scene, accompanied by a door slamming shut or bursting open. "There are hundreds of little details about blocking or timing that have to come together in a precise way in order for the moments of the play to work properly. In a farce, everything can affect the timing -- from the way a door swings to the location of a door handle to the length of a phone cord. Every little detail becomes incredibly important."

Despite its inherent humor, such physical comedy has the potential to be dangerous, says actor Greg Jackson, who plays Vatelin.

"This show is physically demanding, for sure, but that's part of the exhilaration," he says. "You get swept up in the task of trying to manage these insane circumstances, and it's a very giddy ride. I think what's most demanding is keeping the physicality safe, even when it looks out of control. We've got to survive to the end of the run!"

For Hicks in particular, it's been a long run: She worked with Shanahan during the play festival in 2015 and was present for both the play's off-Broadway premiere in New York last year and, a few months later, its regional premiere in Florida.

"It's been amazing to be able to be on this long journey with the script and the playwright and to finally be able to bring a full production to life with this amazing cast, design team and crew," says Hicks. "The audience responded so well to the reading during the New Play Fest. I can't wait for their reaction to the play when they see all the bells and whistles and 10-second costume changes."