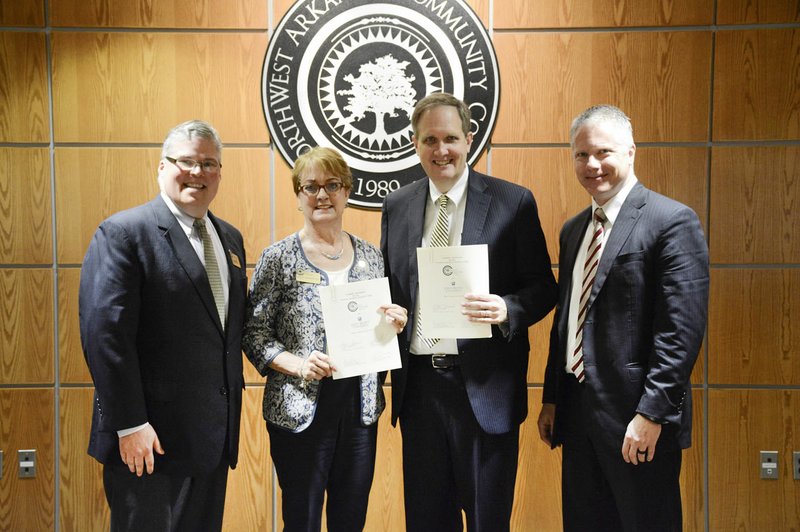 Courtesy photo Representatives from John Brown University and Northwest Arkansas Community College (from left to right) Ricky Tompkins, NWACC vice president of learning and chief accounting officer; Evelyn Jorgenson, NWACC president; Chip Pollard, JBU president; and Ed Ericson, JBU vice president for academic acffairs signed a memorandum of understanding recently to facilitate a seamless transfer of courses and credits from NWACC to JBU. The partnership creates a pathway for students to earn an associate's degrees from NWACC and then complete bachelor's degrees at JBU. Students also can reverse transfer credits, so they are able to complete their associate's degrees at NWACC.

The University of Arkansas at Fort Smith's College of Health Sciences will hold 2017 pinning ceremonies for its surgical technology, dental hygiene and nursing programs in this month.

Erin Noehre of Bentonville received a bachelor of arts degree in English from Northern State University in Aberdeen, S.D., during 2017 spring commencement ceremonies May 6.

Barnes & Noble in Fayetteville honored Tad Sours, social sciences teacher at Haas Hall Academy in Fayetteville, as the local winner of the 2017 "My Favorite Teacher Contest." Chloe Hansberger nominated her favorite teacher by her writing that shared how Sours had influenced her life and why she appreciated and admired the teacher.

Sours received a special award acknowledging his achievement. Hansberger received a certificate of recognition and was honored at the ceremony. Each regional winner will receive a $500 Barnes & Noble Gift Card and a NOOK by Samsung and be considered for the national prize.

Beginning this fall, the University of Arkansas at Fort Smith will offer students the opportunity to earn the pre-kindergarten-level, grades 3-4 endorsement online through its School of Education, making UAFS the first university in the state to offer the endorsement completely online.

The endorsement requires 13 credit hours of coursework, and students can add the endorsement to their Arkansas teaching license, allowing them to teach in a preschool classroom. The endorsement is available for those teaching kindergarten through sixth grade in Arkansas, as well as students admitted in any bachelor of science in elementary education program across the state.

The application deadline is Aug. 18.

The University of Arkansas at Fort Smith has announced the 16 best research presentations delivered at the 10th annual Student Research Symposium.

The 26 students whose presentations were selected by judges for recognition received monetary awards.

Elkins: Kayla Keller (team of 4), "North and South in the 21st Century: Navigating the Pedagogical and Accessibility Implications of Digital Humanities as a New Discipline."

Green Forest: Kendra Turner (team of 4), "North and South in the 21st Century: Navigating the Pedagogical and Accessibility Implications of Digital Humanities as a New Discipline."

Winslow: Cynamin Jarnagan (team of 4), "North and South in the 21st Century: Navigating the Pedagogical and Accessibility Implications of Digital Humanities as a New Discipline."

They learned 161 events and people in a chronological timeline; U.S. presidents; 24 historical sentences, covering Charlemagne, the Renaissance, the Reformation and wars from World War I through the Gulf War; more than 100 locations and geographic features in Europe, Asia and other regions; 24 science facts (including biomes, planets, laws of motion and laws of thermodynamics); Latin verb endings in the first conjugation; English grammar facts (including eight parts of speech, pronouns, four purposes of sentences, noun usages and conjunctions); and multiplication tables and skip counting up to 15 times 15, common squares and roots, as well as basic geometry formulas, unit conversions and math laws.

Jordan Abernathy of Fayetteville, a 2017 candidate for a doctor of veterinary medicine degree, will be the vocalist at his commencement ceremony Friday at Kansas State University in Manhattan.

Devin James Bench of Springdale received a bachelor of arts degree in economics during 2017 commencement exercises held April 29 at Centenary College of Louisiana in Shreveport.

Local students were among the top winners in the 26th annual "Preserve Our Past" art and essay invitational sponsored by the Arkansas Historic Preservation Program.

First-, second- and third-place winners in each division will receive trophies; honorable mention recipients receive ribbons; and all students who entered will receive certificates. Winning entries and honorable mention entries will be displayed at the Historic Arkansas Museum in Little Rock throughout May or at arkansaspreservation.com/Learn-More/preserve-our-past-winners.

Brandon Brigance of Gentry was inducted April 27 into Alpha Chi, the national college honor scholarship society at Williams Baptist College in Walnut Ridge. Alpha Chi admits members from all academic disciplines who are in the top 10 percent of their junior and senior classes.

Brigance, a junior at Williams, is majoring in Christian ministries. He is the son of Michelle and Scott Brigance of Gentry.

LST designed a system for filtering waste water -- leachate -- that escapes from a landfill. They built a model landfill and included their filtering system. The students compared the contaminates in the unfiltered water to those in their filtered system.

Project Earth developed a project comparing the effects of using a chemical pesticide to an organic pesticide. They used three identical plants, treating one with a chemical spray, one with an organic garlic spray and one as the control. The runoff was collected and tested for pH levels and contaminates.

Gable Sloan of Fayetteville, a sixth-grader at McNair Middle School, was presented with an engraved silver medallion to recognize her selection by The Prudential Spirit of Community Awards as one of Arkansas's top two youth volunteers of 2017. The presentation was held April 24 at the school.

Gable operates a nonprofit bakery and catering business that has raised more than $4,000 for a variety of charities and causes, and is now funding an annual scholarship for graduating high school students who have demonstrated a commitment to volunteerism.

As a state honoree, Gable also will receive $1,000 and an all-expense-paid trip in early May to Washington, D.C., for several days of national recognition events. During the trip, 10 of the state honorees will be named America's top youth volunteers of 2017. The event is sponsored in conjunction with the National Association of Secondary School Principals.

Several local students will earn degrees from the University of Kansas in Lawrence during 2017 commencement ceremonies May 14.