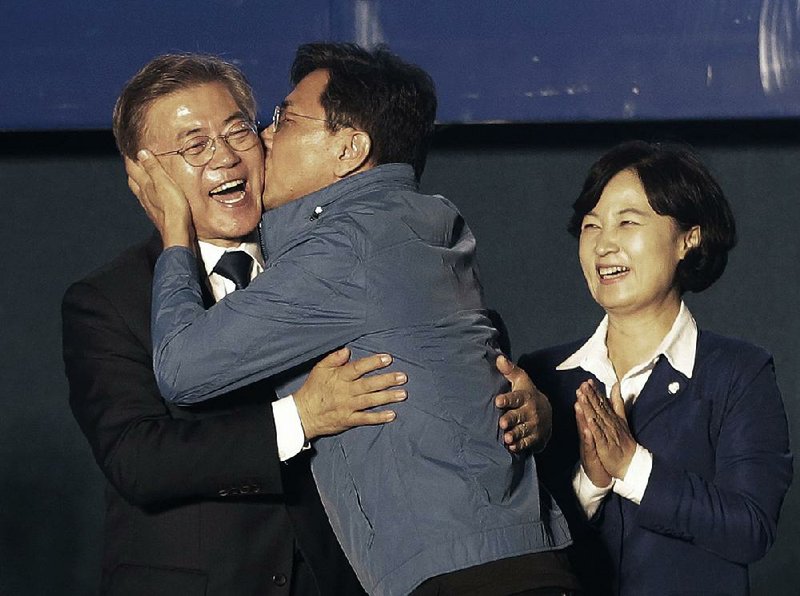 South Korean President-elect Moon Jae-in gets a congratulatory kiss from An Hee-jung, governor of South Chungcheong province, as he takes the stage today in Seoul for a victory speech.

SEOUL -- South Koreans have elected a new president who is wary of the United States and wants to foster warmer ties with North Korea, opening a new, potentially difficult chapter in relations with Washington.

Moon Jae-in of the liberal Democratic Party claimed victory Tuesday night after securing a wide lead. Moon, the son of refugees who fled North Korea during the Korean War, assumed presidential duties after the National Election Commission officially declared him as winner. The election body said Moon had 41 percent of the votes.

He was formally sworn in at noon, taking the oath of office in a ceremony at the National Assembly in the capital, Seoul.

"From tomorrow onward, I will serve as your president," Moon told cheering crowds of supporters in Gwanghwamun Plaza, the central Seoul square where hundreds of thousands of South Koreans held candlelight protests against former President Park Geun-hye, leading up to her impeachment and triggering Tuesday's election.

"I will become the president for everyone, even those who didn't support me," said Moon, who lost to Park in the 2012 presidential election.

Taking up his role as the new commander in chief, Moon received a call from army Gen. Lee Sun-jin, chairman of South Korea's Joint Chiefs, who briefed him on the military's preparedness against North Korea.

A short time later, Moon stepped out of his private home and received an emotional send-off from hundreds of people, who shook his hand, strung flowers on his neck and asked him to pose for photographs. He then left with his wife, Kim Jeong-sook, for a national cemetery in Seoul.

He then visited the offices of opposition parties, seeking support in governing the country split along ideological lines and regional loyalties.

Chinese leader Xi Jinping congratulated Moon on his election win, according to state media reports that provided no further details.

Moon's victory will end almost a decade of conservative rule in South Korea and the hard-line approach toward North Korea that had Seoul walking in lockstep with Washington.

While President Donald Trump's administration is calling for "maximum pressure" on North Korea, South Korea will have a president who has pledged to resume engagement with the North, including reopening an industrial park that the previous administration said was funneling cash to the regime in Pyongyang.

But analysts said Moon, 64, a former human-rights lawyer, is likely to be constrained and more pragmatic in office.

"We still have the alliance, and North Korea still has nuclear weapons. None of these things have changed," said James Kim, an international-relations expert at the Asan Institute for Policy Studies in Seoul, referring to the six-decade-long security alliance between South Korea and the United States.

Tuesday's snap election was called after months of protests before the impeachment of Park in a corruption scandal.

Park is behind bars and standing trial on 18 charges, including bribery and coercion, after it emerged that a confidante was using their relationship to extract money from South Korean conglomerates, including Samsung. She faces life in prison if convicted.

Dozens of high-profile figures, including Park's confidante, Choi Soon-sil, and Samsung executive Lee Jae-yong, have been indicted along with Park.

Moon's presidency forgoes the usual two-month transition because of the impeachment of Park, whose term was to end in February next year. While this means Moon would have to initially depend on Park's Cabinet ministers and aides, there were expectations that he would announce his nominee for prime minister, the country's No. 2 job that needs approval from lawmakers, and also name his presidential chief of staff as early as today.

Moon still will serve out the typical single five-year term.

In a statement Tuesday, the White House said, "We look forward to working with President-elect Moon to continue to strengthen the alliance between the United States and the Republic of Korea and to deepen the enduring friendship and partnership between our two countries."

Moon said his victory would underscore the South Korean people's "desperate wish" for a change in government.

"We did our utmost to help realize this aspiration of the people, and I believe that was the driving force that enabled our victory today," he told supporters in Seoul after the exit polls were announced.

After the upheaval of the past six months, expectations for the next president are high.

To an electorate weary of the corruption that the Park scandal exposed, Moon has promised to improve transparency in government appointments and strengthen regulations on the conglomerates that dominate corporate South Korea.

He called for overhauls to reduce social inequalities, excessive presidential power and corrupt ties between politicians and business leaders. Many of those legacies dated to the dictatorship of Park's father, Park Chung-hee, whose 18-year rule was marked by both rapid economic rise and severe civil-rights abuses.

As a former pro-democracy student activist, Moon was jailed for months in the 1970s while protesting against the senior Park.

Voters also were concerned about the anemic economy and the widening disparity between rich and poor, analysts said. Moon promised to put together a stimulus package, to create 810,000 public-sector positions and to reduce long working hours.

Moon's party does not hold a majority in the National Assembly, potentially making it difficult to achieve these promises. Democrats have 119 seats in the 299-seat parliament, and general elections are not due until 2020.

"The task facing the incoming president will be to solve these problems."

Although domestic issues have dominated this campaign, foreign affairs are much higher up the agenda than usual, in large part because of Trump's election in the United States and the stance he has taken on North and South Korea.

Trump has called for "maximum pressure" on North Korea to make Kim Jong Un's regime give up its nuclear and missile programs, and he has threatened to use military force, an approach that could push North Korea to unleash artillery fire on Seoul.

Moon has argued that Washington's reliance on sanctions and pressure has been ineffective and that it is time to give engagement and dialogue with the North another chance, an approach favored by China. He also has called for a review of the Pentagon's deployment of an missile-defense system in South Korea that the Chinese government has denounced.

While he condemned "the ruthless dictatorial regime of North Korea" during his campaign, Moon also argued that South Korea must "embrace the North Korean people to achieve peaceful reunification one day."

Moon has said he is open to going to Pyongyang to meet Kim if it would help resolve the nuclear problem and that he wants to return to the "sunshine policy" of previous liberal presidents. This began in 1997 -- well before North Korea had proved any nuclear capability -- and involved economic engagement with the North to reduce the gaps between the two Koreas.

In an interview with The Washington Post before the election, Moon played down his differences with Trump, saying he believed the American was "more reasonable than he is generally perceived."

The U.S. president suggested he could make South Korea pay $1 billion to host an American missile-defense system -- contrary to the countries' agreement that South Korea provide the land and the United States the battery.

It went into operation last week, and Moon has complained that its deployment was rushed to present him with a fait accompli.

Moon has vowed to review the Park government's decision to host the Terminal High Altitude Area Defense system, although he also said the review did not necessarily mean he would reverse it.

Information for this article was contributed by Anna Fifield and Yoonjung Seo of The Washington Post; by Hyung-jin Kim, Foster Klug and Kim Tong-hyung of The Associated Press; and by Choe Sang-hun and Jane Perlez of The New York Times.