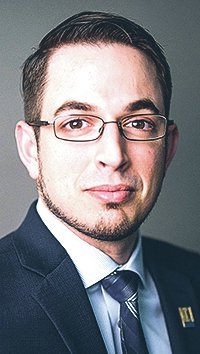 FAYETTEVILLE -- The 2014 tornado that wreaked havoc in Mayflower and Vilonia changed a lot of lives, including that of Devin Howland.

Howland helped coordinate the long-term disaster recovery efforts for that area while working with the Central Arkansas Planning and Development District. Now, he'll take on a new role as Fayetteville's economic vitality director.

The 28-year-old Little Rock native will essentially become a one-man department overseeing the city's contracts with the Chamber of Commerce and local group Startup Junkie. Both entities will report to Howland on everything to do with what's outlined in the contracts to carry out the Fayetteville First plan, said Chief of Staff Don Marr.

"This is really about creating a workforce, attracting the kind of businesses we want and implementing our economic development plan," he said.

The City Council created the position when it approved this year's $155 million budget. Howland's salary is $85,009, according to the city's Human Resources Department.

The council also approved the two contracts to formulate the Fayetteville First economic development plan. A two-year, $300,000 contract with Startup Junkie focuses on entrepreneurship and becoming the "Startup City of the South." A $360,000 contract over two years with the chamber focuses on business retention.

Howland is one of few economic developers in the state certified by the International Economic Development Council. His background is in data and analysis.

"Economic development is still very much a game of numbers and analytics at the end of the day," he said. "However, quality of life and sense of place will always retain and attract the workforce. Fayetteville has a massive advantage in that realm."

Economic vitality entails more than just numbers, Howland said. Developing a workforce, targeting specific business sectors for growth and having all of the city's departments working together toward one goal will serve as key aspects of implementing the five-year Fayetteville First plan, he said.

"This department connects with so many others. Will our sustainability efforts help our economic vitality efforts? Our engineering and planning and transportation -- all of this comes together to build this ecosystem that we call Fayetteville."

Marr said Howland's passion and enthusiasm for the field and the city made him stand out among about 40 applicants from across the country.

"We're going to have a dedicated city resource working every hour of their workday on economic development -- not doing weekly or monthly reviews with our contractors, but really engaged in the activities on a daily basis," he said.